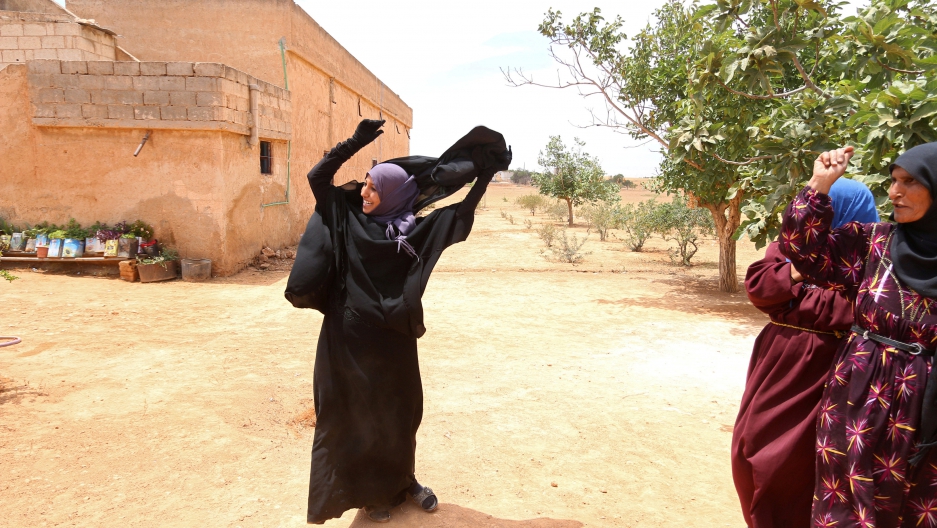 Souad Hamidi, 19, removes the niqab she said she had been forced to wear since 2014, after U.S.-backed Syria Democratic Forces took control of her village in northern Syria from Islamic State fighters on June 9, 2016.

The Islamic State group is losing ground, and its leaders know it.

Abu Mohammad al-Adnani, the official spokesman for ISIS, has come pretty close to acknowledging that the territory controlled by the group is slipping away.

In a statement released in May, Adnani warned the enemies of ISIS, “O America! Listen, O Crusaders! Listen, O Jews!”

“You will never be victorious. You will be defeated,” he said. “Do you, O America, consider defeat to be the loss of a city or the loss of land?”

“And would we be defeated and you be victorious if you were to take Mosul or Sirte or Raqqa or even take all the cities and we were to return to our initial condition? Certainly not!” Adnani added.

Back in 2014, after its fighters shocked the world by seizing vast territories in Iraq and Syria, the messengers from ISIS made a pitch to young Muslims that went something like this: Come join the caliphate of the prophecy! Be part of history by helping to build the Islamic state described in the Quran.

ISIS was never just about state-building, says Daveed Gartenstein-Ross of the Foundation for Defense of Democracies. “That being said, as they lose ground, they need to show that they’re still strong,” he says.

The terrorism campaign launched during this past holy month of Ramadan is a case in point.

“It was an extraordinarily bloody month, with multiple terrorist attacks across at least 10 different countries across the globe that were claimed in the name of ISIS,” Gartenstein-Ross says.

ISIS is not giving up on state-building either, says J.M. Berger of George Washington University. He’s a co-author of “ISIS: The State of Terror.”

But the group’s propaganda has shifted. Instead of calling followers from the West to the caliphate, it's now asking them to stay put and carry out terrorist attacks where they are, no matter how small.

Does its shrinking "state" undermine the legitimacy of ISIS?

“It takes a lot of air out of the balloon. But not all of it,” Berger says.

“A lot of their initial success and propaganda was based on a narrative that they were a very successful group, that they were holding this territory, that they had done things that nobody else had ever done,” Berger says.

The followers of ISIS are extremists, which means that many of them will not be easily dissuaded by facts on the ground, Berger says.

“We’ve seen that ISIS itself is really a mutation that was born out of intense pressure and near-defeat” in the wake of the Iraq War. “When they face that [same near-extinction], we will see a new mutation.”

Berger says it is too early to be optimistic about the defeat of ISIS as a network, which is quick to claim responsibility for all kinds of violent attacks.

“What we’re seeing now is an unprecedented wave of terrorist attacks that are emanating from ISIS, whether they’re actually directing those attacks … inspiring those attacks, or … successfully claiming credit for people who are mentally ill and carry out [acts of] violence.”

European police say about 5,000 foreign fighters have answered the ISIS call to go fight in Iraq and Syria, and now about a third of those people have returned to Europe.

However, Rob Wainwright, the director general of Europol, said recently that he believes ISIS is in decline.