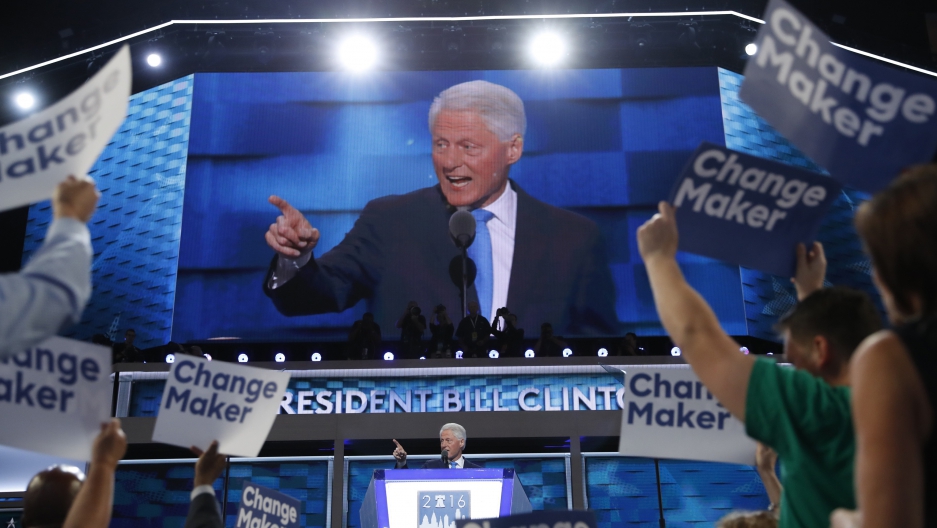 Delegates cheer former U.S. President Bill Clinton as he speaks at the Democratic National Convention in Philadelphia, Pennsylvania, on July 26.

Day Two of the Democratic National Convention was filled with memorable moments. The news highlight of the night was the official nomination of Hillary Clinton, who became the first woman heading a major party to run for president of the United States.

The speeches for the night included one from Clinton’s husband, Bill.

The former president spent quite a bit of time reminiscing about his courtship of Hillary and their life together, as well as how she was shaped by her upbringing. He also made worthy mentions of his wife’s extensive resume, highlighting details of her public service that qualify her to be the country's next leader.

Some heard it as a humanizing, personal speech that elevated Hillary as the candidate — while former president Bill, known to relish the spotlight, took on the role of political spouse. Others found Clinton's focus on the romantic pursuit of his wife uncomfortable, especially given his infidelity (and the impeachment scandal it brought on) while he was in the White House and she was first lady.

But a burst of comments at the end of Bill Clinton's lengthy remarks about immigrants, Muslims, and black Americans stirred up wider controversy.

"And so I say to you, if you love this country, you’re working hard, you’re paying taxes and you’re obeying the law and you’d like to become a citizen, you should choose immigration reform over somebody that wants to send you back.

"If you’re a Muslim and you love America and freedom and you hate terror, stay here and help us win and make a future together. We want you. If you’re a young African American disillusioned and afraid, we saw in Dallas how great our police officers can be, help us build a future where nobody is afraid to walk outside, including the people that wear blue to protect our future."

His message to Muslims drew a mix of reactions on social media. Some were offended by the implication that Muslims in America aren't already American — already part of the "we" who "want you" — or objected to Muslims and terror being aligned so closely. (Both of those concerns speak to documented stereotypes and feelings among Americans about Muslims in general.) Others seemed to appreciate the message as a gesture of inclusion.

Bill Clinton's use of "If you're a Muslim" followed by "and you love America" suggests that if you're the former, you must prove the latter.

"Stay here...." Where are American-Muslims going? Is @HillaryClinton going to force us to leave? #DemsInPhilly https://t.co/oMev8TtvVZ

Clinton's rendition of "you're either with us or against us". Dems, like GOP,keep boxing us into one story: "terror" pic.twitter.com/IcloBJFvSm

Why is there an "if" regarding hating terror? Are American Muslims in separate groups on this issue? https://t.co/pvcsx8Svoh

Sorry @billclinton, my Muslim American daughters are part of the 'us'. They're not a separate category (or subgroup) https://t.co/hJBhuFnmRT

Just once I want, as a muslim, my value not to be tied to helping fight terror. We have more to offer. #DemsInPhilly

I would very much like to be excluded from this narrative, one that I have never asked to be a part of, since 2001. https://t.co/mpRtwjtlof

. @billclinton really should've said, "if you're a #Muslim, stay here."

But I'll let this one slide. #DemsInPhilly https://t.co/rEUvjrqUHK

Bill Clinton: "If you're a Muslim and you love America and freedom and you hate terror, stay here and help us win." -YES I DO & YES I WILL!

"If you're a Muslim and you love America and Freedom...We Want You!" Love ya, Bill. #DemsInPhilly https://t.co/7odavYIrvY

What did you think of Clinton's speech? Let us know in the comments below.