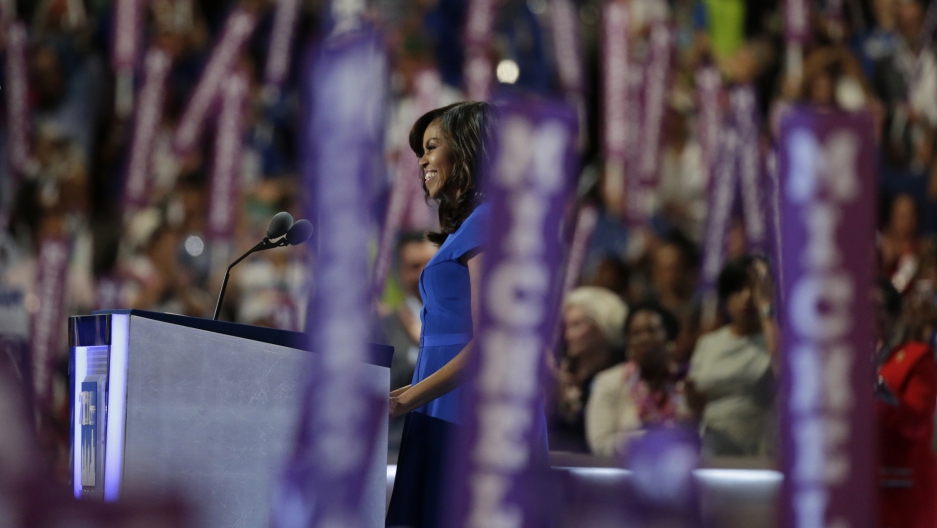 First Lady Michelle Obama smiles as she takes the podium at the Democratic National Convention in Philadelphia, Pennsylvania, July 25, 2016.

Did you hear Michelle Obama's speech?

If you didn't, you should.

If you did, you should probably hear it again.

No matter your politics, the first lady's speech on the first night of the Democratic National Convention was essential listening for US voters. Obama did more than rally the crowd for near-nominee Hillary Clinton — she also threw the country's current political divisions, conflicting ambitions and struggles with racism into sharp relief against some of its purest principles.

If you're short on time to watch the whole thing, here are a few important highlights.

Kids were front and center 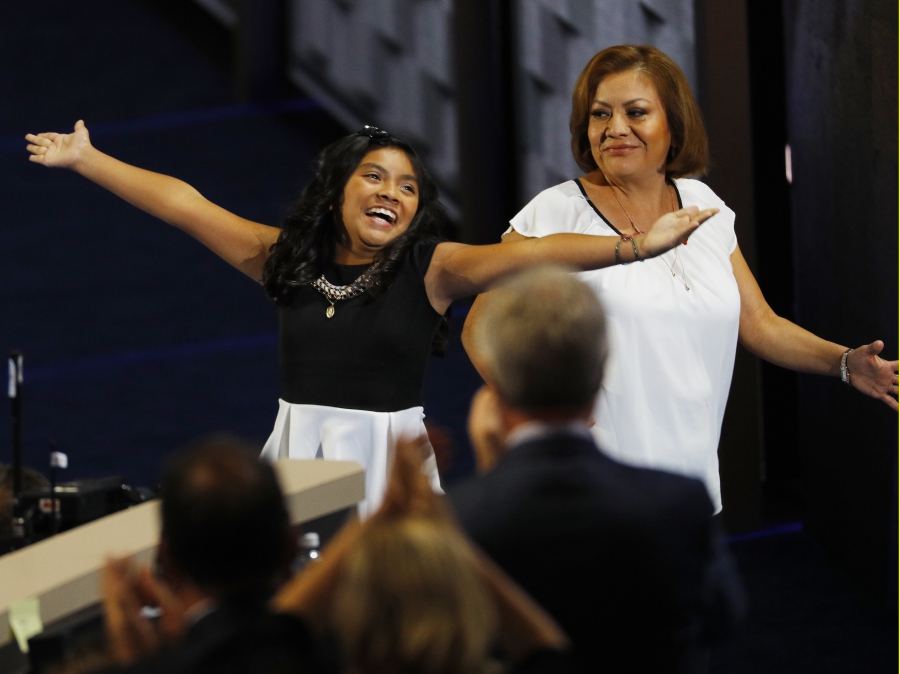 "Soy Americana," 11-year-old Karla Ortiz told the DNC crowd when she and her mother Francisca addressed them Monday night. Her parents are immigrants to the US, and Karla talked about her fears that they would be deported.

Pointing to policies that benefit children draws attention to some of the strongest, and least controversial, elements of Clinton's record as a public servant. It also gets voters thinking about the future — and about being role models for their kids. Obama put it like this:

"With every word we utter, with every action we take, we know our kids are watching us. ... And let me tell you, Barack and I take that same approach to our jobs as president and first lady, because we know that our words and actions matter not just to our girls, but to children across this country — kids who tell us, 'I saw you on TV, I wrote a report on you for school.' Kids like the little black boy who looked up at my husband, his eyes wide with hope, and he wondered, 'Is my hair like yours?'

"... You see, Hillary understands that the president is about one thing and one thing only — it’s about leaving something better for our kids. That’s how we’ve always moved this country forward — by all of us coming together on behalf of our children — folks who volunteer to coach that team, to teach that Sunday school class because they know it takes a village. Heroes of every color and creed who wear the uniform and risk their lives to keep passing down those blessings of liberty."

Note the "it takes a village" bit — remember Clinton's 1996 book by that name? It was also the title of the speech Clinton delivered to the DNC that same year as first lady.

"I want a president who will teach our children that everyone in this country matters — a president who truly believes in the vision that our founders put forth all those years ago: That we are all created equal, each a beloved part of the great American story."

Obama — an accomplished professional, mother of two, wife to a president for eight years, consistently more popular than her husband, and a woman of color — may have been the most credible person who could deliver this message to delegates and the American public on Clinton's behalf.

Obama made stunning statements about America's foundation of racism 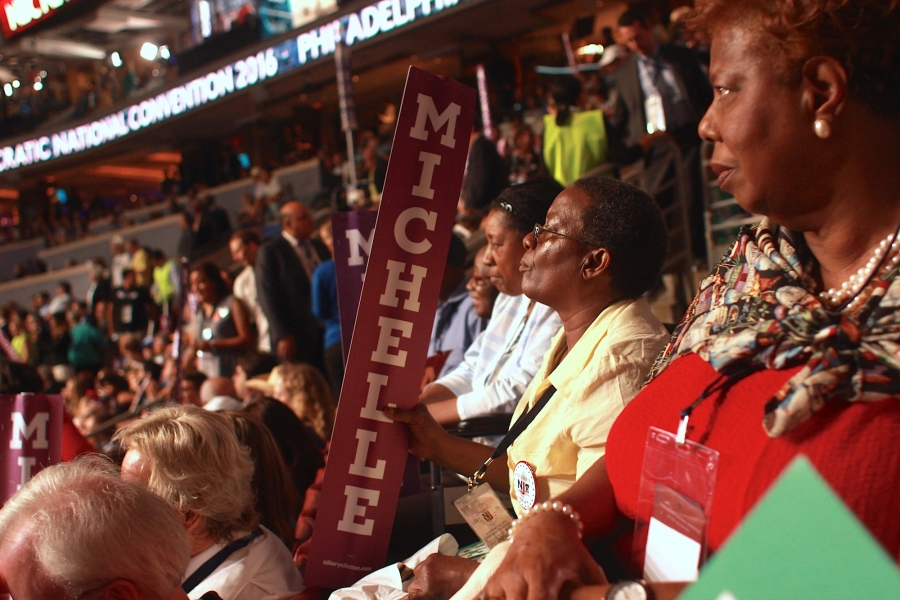 Here's something we've never heard from a US president's wife before:

"That is the story of this country, the story that has brought me to this stage tonight, the story of generations of people who felt the lash of bondage, the shame of servitude, the sting of segregation, but who kept on striving and hoping and doing what needed to be done so that today, I wake up every morning in a house that was built by slaves, and I watch my daughters — two beautiful, intelligent, black young women — playing with their dogs on the White House lawn. And because of Hillary Clinton, my daughters — and all our sons and daughters — now take for granted that a woman can be president of the United States."

The first lady was visibly moved as she said this, and many in the crowd, even more so. The World's Maria Murriel was on the convention floor:

This is the most united the room has been all night. #FLOTUS #DNCinPHL #DemsInPhilly pic.twitter.com/gUqXwD1Vek

This is when her voice cracked. #DemsInPhilly https://t.co/UGKto9ZBVJ

The future is female 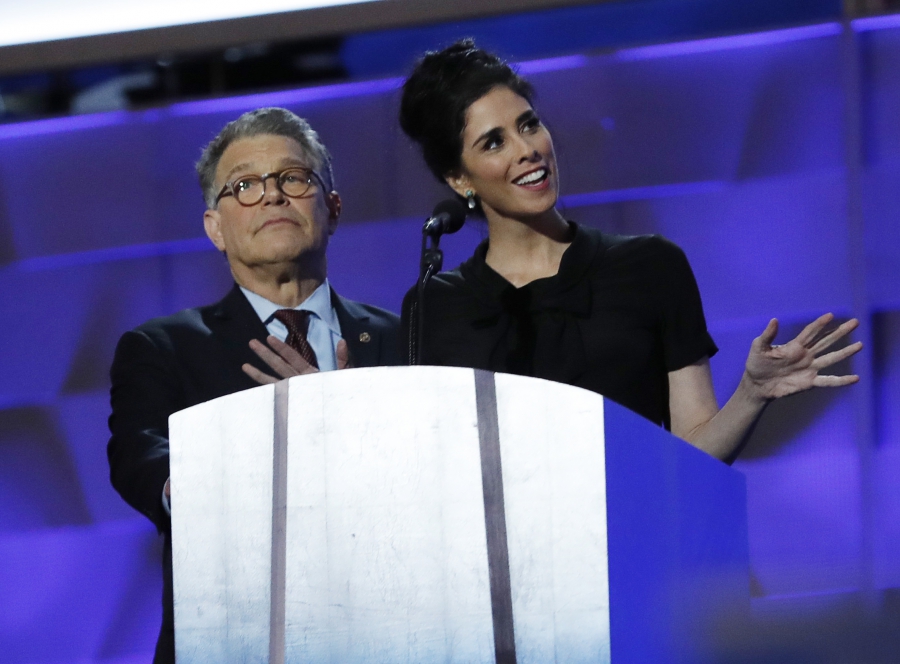 US Senator Al Franken from Minnesota and comedian Sarah Silverman crack some deep jokes at the DNC Monday night.

This saying has been around since at least the 1970s. But Monday night at the DNC made the end of patriarchy feel closer than ever. In addition to focusing on her own daughters' futures, Obama lauded

"... leaders like Hillary Clinton, who has the guts and the grace to keep coming back and putting those cracks in that highest and hardest glass ceiling until she finally breaks through, lifting all of us along with her."

But it was the context of the evening that really drove this idea home. Obama spoke at about 10 p.m., after actress and Clinton supporter Eva Longoria took on Donald Trump and got personal about being Mexican American, and after comedian and Bernie Sanders supporter Sarah Silverman told "Bernie or Bust" voters that they're being "ridiculous" refusing to vote for the Democrats' pick.

Those women had followed the "brave" 11-year-old daughter of immigrants to the United States who spoke about immigration reform, and a disabled woman who described her struggle to be seen as a young professional — and who slammed Trump (“He doesn’t see me, he doesn’t hear me, and he definitely doesn’t speak for me.") Elizabeth Warren came after Michelle Obama — probably no one envied that position — and took Trump to task, too. Behind the scenes, the convention was run for the first time by three women, three African American women — Donna Brazile, Ohio Rep. Marcia Fudge and the Rev. Leah Daughtry.

And of course, the person this was all about elevating? Oh, just the first woman ever to get this close to the country's highest office.