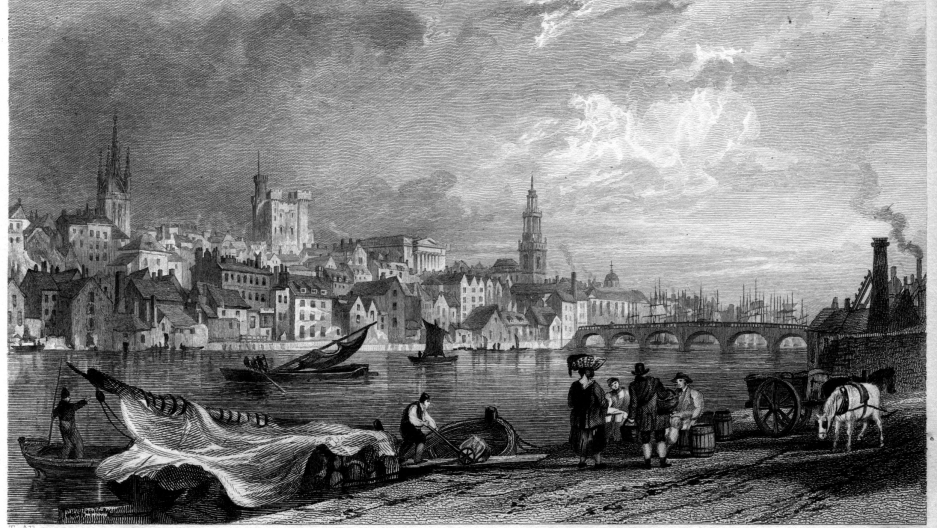 A 1832 engraving of Newcastle upon Tyne, England, by William Miller. Newcastle's coal industry made it a key city in England's industrial revolution.

Once it was synonymous with the coal industry. Now Newcastle upon Tyne, England, is home to one of the latest universities to shun investments in the coal industry and other fossil fuel-oriented businesses.

Newcastle was a key center of the coal industry that fueled England’s industrial revolution, a heritage that lives on in the centuries-old phrase “like bringing coals to Newcastle,” the epitome of a pointless pursuit.

“It’s a great heritage that Newcastle upon Tyne has in its contribution to economic and industrial development through coal mining in this region,” Taylor says. “It employed a great many people and provided a lot of prosperity and development.

“But times have changed and there’s a really very pressing need to decarbonize our energy systems if we’re going to avoid catastrophic climate change.”

The divestment move was spearheaded by members of the Newcastle University Student Union, and it comes on the heels of similar announcements last year by 10 other UK schools and many others in the US and elsewhere.

According to the activist organization gofossilfree.org, $3.4 trillion has already been divested from fossil fuels globally.

The campus divestment movement has scored victories at such top-notch institutions as Stanford University, which moved to rid itself of investments in coal companies in 2014, while retaining the option of keeping investments in oil and gas.

Other big US universities, including Harvard and MIT, have resisted pressure from students and faculty members to divest.

And Newcastle University’s move is not a commitment to complete divestment from all fossil fuel holdings.

The university’s new policy commits it “to divest from thermal coal and oil/tar sand companies and other non-progressive oil and gas companies within five years,” while allowing it to maintain investments in “progressive companies that are working toward low-carbon solutions.”

Taylor says the decision allows Newcastle to keep investments in some old-line energy companies as long as they are moving substantially toward renewable energy.

He argues such compromises are necessary because these companies have the capital resources to fund large-scale renewable energy projects.

As for how the decision by Newcastle University to rid itself of holdings in coal is being received in the city that the industry built generations ago, Taylor says the University’s move is “perfectly in tune” with the city’s aspirations.

“People understand (what’s going on),” he says. “Also, the Newcastle city council have just signed an agreement… to become zero-carbon by 2050.”

“What we’re trying to do is be proud of our heritage but also realize that we’ve got to move on, we can’t be nostalgic and live in the past… So we’re thinking of things like data mining rather than coal mining now, and trying to generate a new set of skills and jobs in the region.”