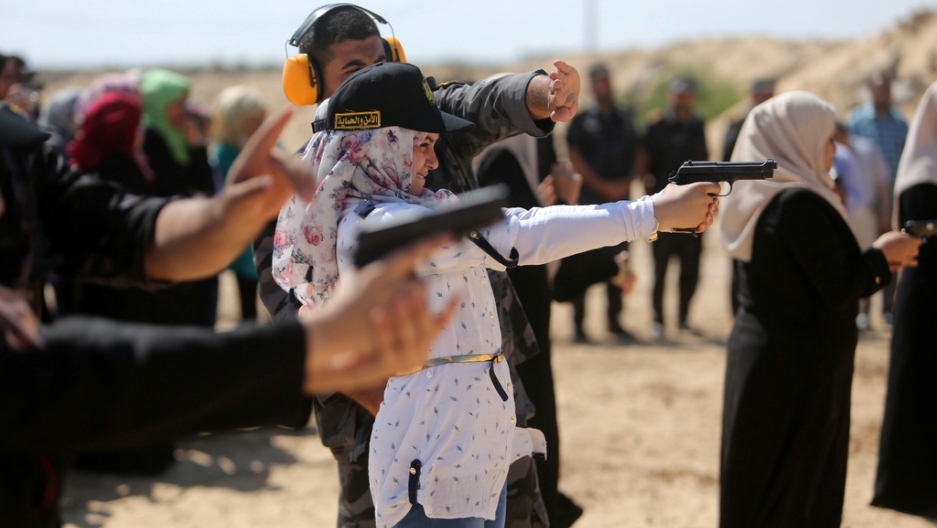 A Palestinian girl aims a pistol as she prepares to fire at a target during a training session for the families of Hamas officials organized by Hamas-run Security and Protection Service in Khan Younis in the southern Gaza Strip on July 24, 2016.
Credit: Ibraheem Abu Mustafa
Share

As if from nowhere, a dozen young people surge out of a tunnel, Kalashnikov assault rifles in hand, to launch a surprise assault on a military post.

This is the Gaza Strip, the Palestinian enclave that has seen three wars with Israel since 2008, but this time the attack is not real.

The young people, aged between 15 and 20, are taking part in a summer training camp for the Ezzedine al-Qassam Brigades, the armed wing of Hamas, the Islamist movement which runs Gaza.

Such camps in the enclave of 1.9 million people have been heavily criticised by rights groups concerned with young people's welfare.

It is the first time that Jihad, 16, has entered one of the underground tunnels, which Hamas considers a major strategic asset in its conflict with Israel and which are usually kept well hidden.

The young Palestinian comes from Shejaiya, a Gaza neighbourhood ravaged by war two years ago, and is carrying out a drill to kidnap fake Israeli soldiers.

At the Yarmuk base of the Al-Qassam Brigades east of Gaza City, dozens of young men descend 20 metres (66 feet) from a tower on ropes, as others navigate burning roadblocks.

The base is near the sensitive border between Israel and Gaza, which has been controlled by Hamas for around a decade and is subject to a strict Israeli blockade.

In a week, Al-Qassam says it will train nearly 30,000 young people in basic fighting techniques.

These young recruits to the summer camps are a key part of Hamas's attempts to prepare the population for "the battle of liberation of Palestine", a member of Al-Qassam told AFP.

"Our message to this (young) generation is that the future is yours," he said, his face concealed by a black balaclava. "It is thanks to you that we will be victorious."

Khalil al-Haya, another Hamas official, argued that "there is no choice but the gun".

"The enemy destroyed houses and imposed a blockade hoping that people would turn against us, but the people closed ranks around the resistance and Al-Qassam and send their children to our camps," he added.

Rights activists are deeply concerned by the camp, however.

"We are completely opposed to children's participation in military camps," said Issam Younis, who heads the Gaza-based Al-Mezan Centre for Human Rights.

"Children are meant to have fun and learn to develop their thinking. They must absolutely be kept away from violence and anything that may disrupt their childhood."

The camps take place every summer, but this year Al-Qassam has also opened the doors to some of its bases for other interested local residents.

Rows of weapons are displayed to the hundreds of people who flock to see rockets, missiles and drones emblazoned with the "Qassam Manufacturing" symbol.

Debris from tanks and Israeli drones allegedly shot down or captured in the 2014 war are also displayed.

Members of Al-Qassam's communications branch welcome young people and explain the different divisions: there are infantry, snipers, and missile and rocket brigades, among others.

"Some young people have relatives who were killed or imprisoned, others have seen their homes destroyed before their eyes, and that's why they decided to come here," said another masked fighter, who says he leads a youth group.

One 16-year-old told AFP his father was killed by an Israeli bombardment during the 2008-09 war. Four years before that, his brother had carried out a suicide attack.

"I joined this camp because that is how we will free our country from the occupation and I can avenge my father and my brother," he said.

"I am participating in this camp to learn how to fight the enemy," Mohammed al-Bitar, 15, told AFP, before seizing a grenade from a stand.