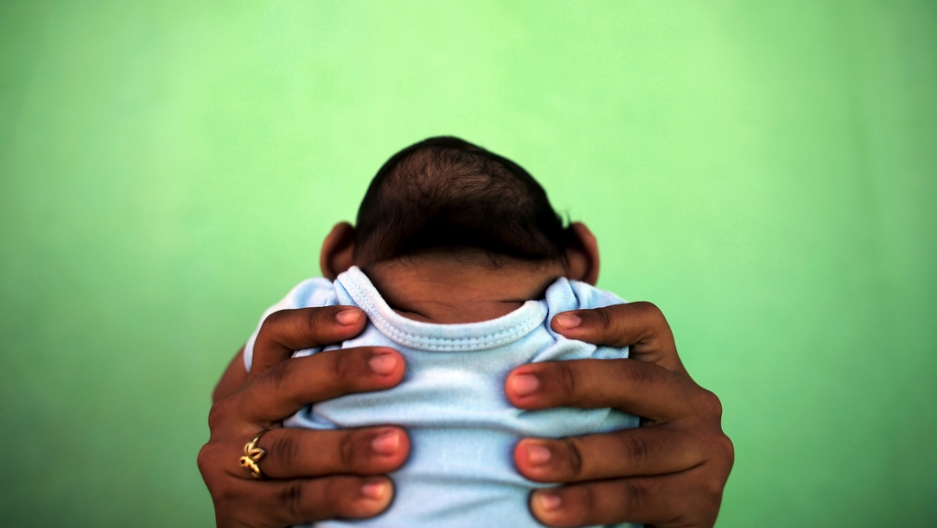 A four-month-old baby born with microcephaly is held by his mother in front of their house in Olinda, near Recife, Brazil, Feb. 11, 2016.
Credit: Nacho Doce
Share

Tens of thousands of babies may be born with debilitating Zika-related disorders in the course of the outbreak sweeping through Latin America and the Caribbean, researchers said Monday.

Mathematical projections suggest about 93.4 million people may catch the virus — including some 1.65 million pregnant women — before the epidemic fizzles out, a team reported in the journal Nature Microbiology.

Eighty percent of people will develop mild symptoms or never even be aware they have the virus.

But for babies in the womb Zika can be devastating — linked to a brain-damaging disorder called microcephaly that can lead to stillbirth or severely disabling birth defects.

Among women in a high-risk early term of pregnancy, anything between one and 13 percent have foetuses develop microcephaly or other Zika-related complications, said the multidisciplinary research team from the United States, Britain and Sweden.

This meant "somewhere on the order of tens of thousands across the whole of Latin America and the Caribbean who could realistically end up developing microcephaly or a related condition," said study co-author Alex Perkins of the University of Notre Dame in Indiana, and specified this referred to "live births."

The projection was "a worst-case scenario" he told AFP, "but a realistic one".

It did not account for women who may be postponing conception or having abortions as a result of the outbreak.

"I know that does not provide a very precise number, but I think it's valuable in that at least it gives an order of magnitude guess, which is better than having no idea whatsoever."

The team used data on the usual number of pregnancies, the prevalence of the mosquito species spreading the virus, weather conditions and socio-economic conditions that make people more vulnerable, and disease spread dynamics.

Mathematical models of disease progression are notoriously prone to inaccuracies, as estimates can be skewed by such factors as the infectiousness of the virus, the adaptative response of the immune system and social and economic factors that help it to spread.

Experts not involved in the study said the new estimate may be conservative.

Derek Gatherer of Lancaster University noted recent research which found that as many as 29 percent of babies of Zika-infected mothers develop problems.

If so, "over half a million" children may ultimately be affected, he said.

Whatever the final number, a support system for affected babies and their families "needs to be put in place as soon as possible," said Jimmy Whitworth of the London School of Hygiene & Tropical Medicine.

"Over 1,700 affected babies have been born in Brazil so far, and the numbers are going to continue to increase in the months ahead," he said in comments via the Science Media Centre.

The research team predicted Olympics host Brazil will suffer more than double the impact of any other country, with about 580,000 pregnant women out of 37.4 million total infections.

Another recent study had put the annual number of pregnancies in the Zika-affected region at about 5.4 million.

But many of those, the new paper said, would not be affected by Zika, due to the effects of "herd immunity".

This is a natural process whereby people become immune to a virus after their first exposure, eventually reaching the point where mosquitoes cannot find enough susceptible people to keep the epidemic going, and it dies out without infecting everyone.

Earlier this month, a study in the American journal Science predicted the outbreak should be over within three years.

The virus, first discovered in Uganda in 1947, took the world by surprise when it emerged, and with such virulence, in Latin America last year.

There is no cure or vaccine.