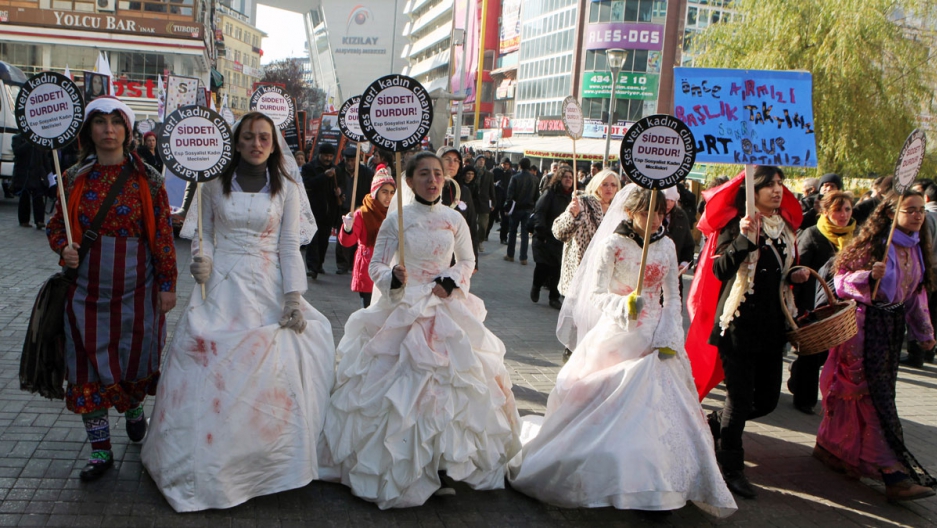 After 30 years of marriage, Celal decided it was time for a second wife.

In 2013, the Turkish merchant from the town of Kilis married Kinda, a 29-year-old widow who had fled from Aleppo to Turkey with her son Bashir, now 11. The couple has since had two more children, Ahmet, 2, and Nur Jahan, five months. Celal, 65, says his first wife doesn’t object to his second marriage, but he doesn’t allow her to speak with reporters. He keeps his two wives in different homes.

Polygamy was outlawed in Turkey in 1926 and carries a two-year jail sentence for violators. But with the recent influx of refugees into Turkey, most of them Syrian, activists say the practice is on the rise. And they accuse the government of turning a blind eye, failing to prosecute men who break the law by taking second and third wives, some as young as 10.

Just in Kilis, with its population of 230,000, at least 5,000 religious ceremonies have been performed outside the courts between 2011 and 2014, wedding already married Turkish and Syrian men to Syrian women, according to the Syrian Observatory for Human Rights.

“We hear different stories, but it’s hard to determine who’s doing what,” said Muammer Fazliagaoglu, head of the Kilis lawyers’ association. “We haven’t heard of a man being prosecuted because he has a second wife.”

Because their marriages aren’t recognized by law, second wives have few rights to divorce, inheritance or child support. And the children of polygamous marriages are legally considered the kids of single, unwed mothers unless their Turkish fathers claim paternity.

Aid workers say Syrian women are driven into polygamous marriages by poverty, displacement and cultural attitudes. Before Kinda married Turkish merchant Celal, she had already been a second wife to a man in Syria. “He showed off his wealth and was a womanizer,” she said. When gangsters kidnapped and killed her husband, and then started threatening her son, her family paid smugglers to bring them to Kilis. They struggled financially, and marriage was a way for Kinda to ensure her and her son’s security.

According to Nur Burhan, a Syrian gender researcher with the Center for Civil Society and Democracy, the majority of second wives are child brides sold to Turkish and Syrian men by their own families.

“These families don’t want the responsibility of their daughters anymore. They’re just thinking of putting food on the table,” Burhan said in her office in Gaziantep, another southeastern Turkish city grappling with the issue.

Under the Ottoman Empire, Muslims could legally marry up to four wives, according to Islamic law. Some Turks are calling for a return to those days, including a few public figures. Recently on Kanal A TV, conservative commentator Hasan Acikalin complained that Turkish Muslims are being forced to choose between their religious values and their home country. Muslims “can’t get married according to Islamic rules,” he said. “There is monogamy. Second or third spouses don’t have legal rights.”

Critics say the practice is part of the increasing tensions between Turks and Syrians who, at 3 million, make up the largest population of refugees in the country. Some people, like Fazliagaoglu, blame polygamy for exacerbating the already rising divorce rate, as Turkish women leave their husbands when they take on a Syrian wife. 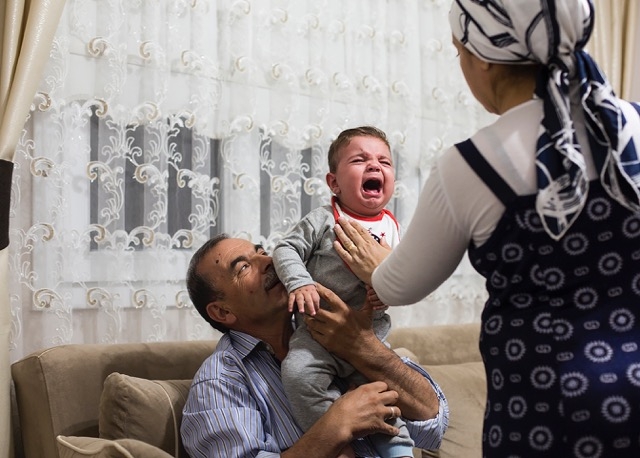 Celal with his second wife Kinda and their son Ahmet, now 2 years old, in a photo taken a year ago. Celal would only permit his second wife to be photographed from the back.

Even when the authorities can identify people engaged in polygamy, they say their hands are tied because marriage is seen as a private issue despite the law. One prosecutor said one of the main problems is that, until last year, clerics were not allowed to perform religious marriages before a civil marriage had taken place but that law has been repealed, making it legal for imams to conduct “nikahs” without punishment.

“I haven’t heard of any prosecution after the law on imam marriages has changed,” said the prosecutor, who requested anonymity due to him only recently taking on the role.

After the July 15 failed coup in Turkey, which has been followed by a purging of 50,000 accused dissidents, pro-government Islamist conservatives have been galvanized to preach their version of Islam in the media and on the country’s streets. Women’s rights activists worry that their efforts to fight practices like polygamy will be jeopardized by a stronger Islamist government. “We women are the most vulnerable population right now,” said Pinar, an activist who didn’t want to give her last name, on Thursday.

Frustrated by what they see as the government’s failure to protect the victims of polygamy, aid organizations are focusing on increasing awareness about the issue. Letting people know, for example, that if an underage girl can prove her family forced her into marrying an already married man, she has the right to get the union annulled.

Educating Syrian refugee women about their rights could stop them from entering polygamous relationships in the first place, said Zehra Saglam, a private attorney who works with NGOs partnering with the Turkish government. Saglam offers free sessions in refugee centers in Gaziantep, meeting with refugees to tell them about Turkish laws and their rights.

“If Syrian women know they can stand on their own, why would they need to marry as second and third wives?” Saglam said.

In Kilis, Celal says he would like polygamy legalized because he sees it as his Islamic right. “We would love for the government to make a second marriage legal … because a lot of people can benefit from that. It can be helpful for both sides,” he said.

Kinda would like the same. Rocking Nur Jahan to sleep, she speaks in Arabic, which Celal doesn’t understand. “I’m most afraid of my future because in both of my marriages, I was the second wife,” she said. “I’m worried about the legal status I don’t have.”

A version of this story first appeared in Women & Girls Hub.