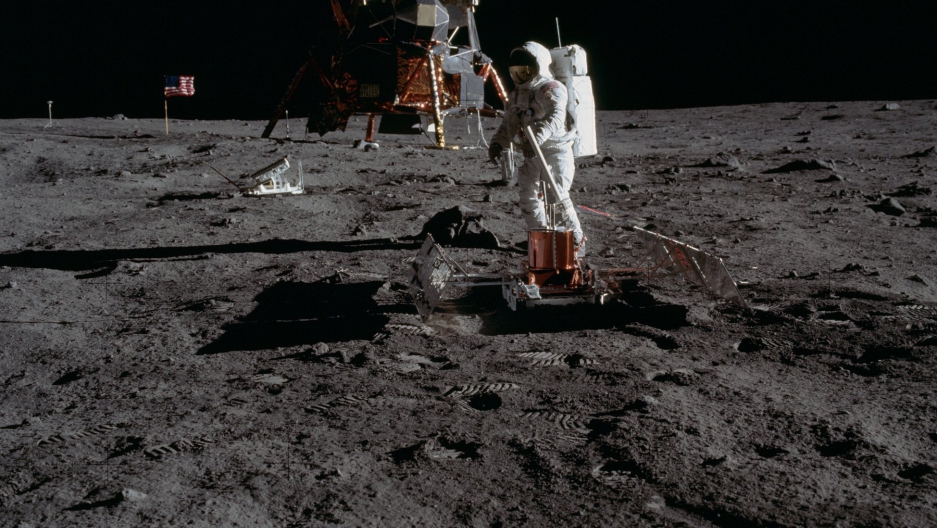 Astronaut Buzz Aldrin levels the Passive Seismic Experiments Package. This image was taken at Tranquility Base during the Apollo 11 Mission.

Nearly 47 years ago, astronauts Neil Armstrong and Buzz Aldrin emerged from Apollo 11 and became the first humans to set foot on the moon. In addition to leaving their iconic footprints, the crew left equipment and memorabilia scattered on the lunar surface.

Archaeologist Beth O’Leary says that the landing area constitutes an archaeology site that should be preserved.

“It's preserved now by the fact that it's so remote," O’Leary says. "We haven't visited it with any manned spacecraft in a long time. It's also pretty expensive to get there. but it lies in a very grey legal area because it's really governed by the 1967 Outer Space Treaty which didn't address historic preservation — they just wanted to get there. So it is preserved by its remoteness, by its cost to get there, but … we will go back to the moon … and so how do we decide which sites are important?”

O’Leary thinks the Apollo 11 site should be preserved in the same way other historic sites on Earth are preserved.

“I mean I'd argue for Apollo 11 right off the bat because that is the first lunar landing and as an archaeologist we're very concerned with the first landing of Columbus in the Caribbean, the first footprint, for example in Tanzania, which is 1.6 million years old.”

Even though the moon is currently protected by its remoteness, Ann Darrin, managing executive of the Space Exploration Sector at The Johns Hopkins University Applied Physics Laboratory, says it won’t always be so difficult to get to outer space.

“When space tourism happens, whether it's 50 years from now or 100 years from now, if we don't have some safeguards of how far away people can be or where they could go or where the rovers can go, then we stand to lose that heritage,” Darrin says. “We've lost a lot on Earth, so I think it's important that we we think about now, what do we want these early space sites … how well do we want these to be preserved so that in the future generations can visit and see them and study them?”

The site of the first lunar landing is not the only human artifact in space that archaeologists think about preserving, studying and possibly visiting in the future. There are some half million objects of “space junk” currently in orbit around Earth. Vanguard 1 for example, which was launched in 1958, is the oldest satellite still in space. O’Leary, however, says it might not be a good idea to retrieve that piece of history.

“You don't think of museums floating around on Earth but very few museums have lasted 600 years or even 240 years,” O’Leary says. “So that locational integrity — that orbit in effect is preserving it, and if you take it down, if you grab it somehow, I think you lose part of that extraordinary significance … We also have models of Vanguard 1 in the Smithsonian.”

Both Darrin and O’Leary agree, however, that it’s necessary to establish some sorts of guidelines for preserving historic space sites. Darrin says NASA has already made a good start.

“NASA in 2011 went ahead and issued a series of guidelines and that was a sea change from when I started in 2000 when I proposed to them to make the Apollo 11 lunar landing site a national historic landmark and they said no,” Darrin says. “They came up with a series of recommendations. They used a panel of experts — physicists and engineers … we wrote down really what people should do that come back to the moon to visit — and it was for commercial spacecraft and also for nations that come and visit the moon.

"And what they tried to do was look at the effects of landing on the moon — mostly robotics and how that would affect the heritage objects, the important significant objects left on the moon. And they set aside Apollo 11, the first one, and Apollo 17, the last one, and said within the radius of two kilometers you can't even go there. So essentially that is now in place from NASA.”