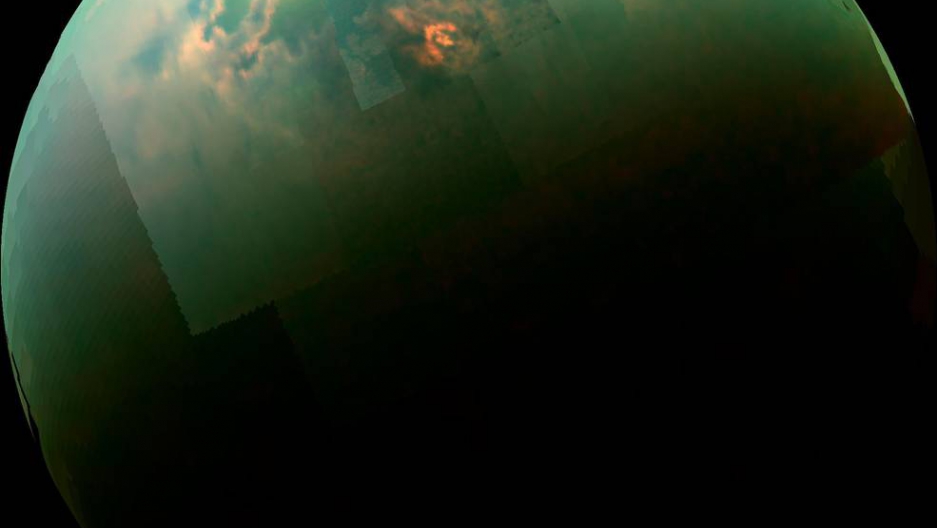 Sunlight glints off of Titan’s northern seas in this near-infrared color mosaic from NASA’s Cassini spacecraft.

NASA/JPL/University of Arizona/Univeristy of Idaho

Researchers have found that Saturn’s moon Titan could have the right chemical conditions to create precursors to life, although the chemistry — based on hydrogen cyanide and a molecule called polyimine — wouldn’t lead to life as we know it here on Earth.

Rachel Feltman, editor of the “Speaking of Science” blog at The Washington Post in New York, says Titan — Saturn’s biggest moon — is one of the most exciting moons in our galaxy and it’s beginning to challenge our concepts of what life might be like outside planet Earth.

“Titan is one of Saturn's moons … and it's a really exciting moon," Feltman says. "It has the only stable liquid on the surface of anything other than Earth in the solar system that we know of. It has lakes and rivers and oceans, but they're all full of methane instead of water. And has this really thick atmosphere, but it’s, you know, very different from our own. And there's a lot of hydrogen cyanide produced in that atmosphere when the sunlight hits it."

“These researchers basically modeled how hydrogen cyanide might act in the super-cold environment of Titan and they think that it might form this polymer called polymine that under Earth conditions is not a very exciting polymer. But under Titan's conditions they think it might have some of the qualities that might make it an intriguing candidate for a building block of life. You know, the way certain polymers helped create amino acids on early Earth.

"So they don't know this for sure, they haven't even modeled exactly how it happened. But it's an interesting thing to look into, you know, how life might be completely unrecognizable to us on other planets. Because when the conditions are so different, the chemistry that goes into life will be so different,” Feltman says.

Titan is not the only moon in our solar system that scientists are interested in studying to try to learn more about possible life outside planet Earth. Europa, the sixth closest moon to Jupiter is also intriguing to researchers.

“A lot of planetary scientists would love to see us go to Titan,” Feltman says, “And there is the Europa mission coming up or tentatively coming up in the 2020s and you know that's a slightly different world because it's a subsurface ocean. But it's a very similar idea that these moons with oceans on them are probably really great places to look for life ... And Ganymede is thought to have an ocean under the surface. There’s really so many moons that we should be going to.”