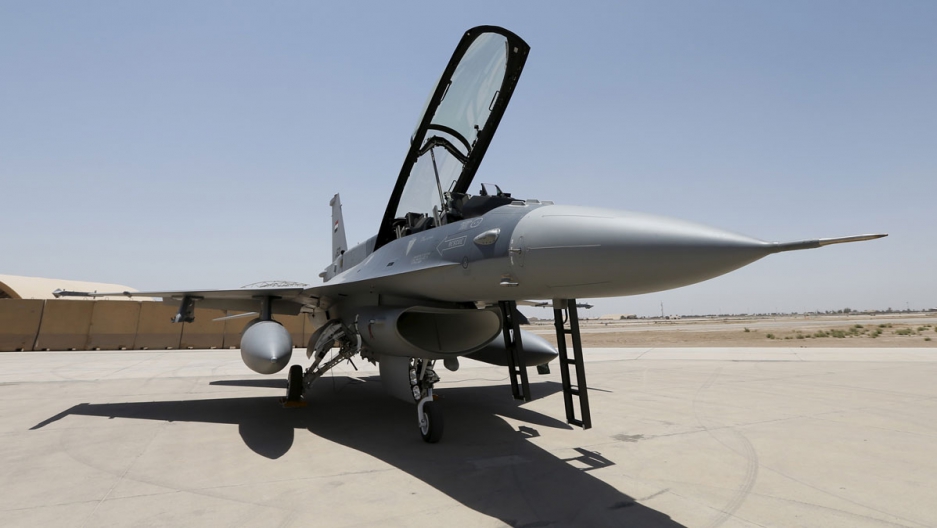 A US F-16 fighter jet at the tarmac a military base in Balad, Iraq. Temperatures in Iraq have reached 140 degrees Fahrenheit in the past year.

In June, House Republicans attached an amendment to the defense authorization bill that stopped the Defense Department from spending money to plan for climate change.

The amendments blocked funding associated with implementing executive orders — some of which go back to President George W. Bush — that resulted from bipartisan efforts to establish goals across the federal government for energy security, conservation, climate resilience and sustainability.

The measure was sponsored by Colorado Republican Ken Buck, who posted a statement on his website that reads, in part: “The military, the intelligence community [and] the domestic national security agencies should be focused on ISIS and not on climate change. The fact that the president wants to push a radical, green energy agenda should not diminish our ability to counter terrorism.”

Sherri Goodman, a former deputy undersecretary of defense for environmental security, has little patience for this kind of thinking.

“It's simply a reflexive anti-climate vote, without understanding the detrimental impact it will have on our troops, training and our military readiness,” Goodman says. “I think if the members had a chance to hear from our military leadership about how [this planning] protects readiness, not undermines it, how it reduces cost, not raises it, I believe they would have a different view.”

Taxpayers should expect their military to be energy efficient and energy resilient and to be prepared to protect the public from outages caused by increasingly powerful storms, Goodman insists. The GOP amendments prevent the military from doing this.

With a more aggressive Russia looking to operate militarily in the Arctic, a region that is changing faster than any region on the planet, our military and our Coast Guard need to better understand the environmental conditions there, Goodman says. “If we don’t, it's like going to sea with our eyes blind.”

While ideology certainly underlies the GOPs actions, terminology has a role, too, Goodman points out. The Navy, for example, has cut fuel costs by upgrading its energy program. But in their proposals they never wrote ‘climate change’ and they sailed right through Congress.

“Unfortunately, in our own country, the word ‘climate’ is a lightning rod,” Goodman notes. “If you re-frame the issue as one of improving military readiness, reducing risk and increasing resilience, I think you can achieve the same result.”

The Senate will also vote on the defense bill, so Goodman doesn’t see this as done deal.

“I do firmly believe that congressional defense leadership on Armed Services and Defense Appropriations will appreciate that our forces need to be able to understand how to operate at the risk of higher temperatures,” she says. “These findings are widely known. The Defense Science Board reports about them. There have been numerous intelligence committee studies. So, in fact, this is just responsible planning.”