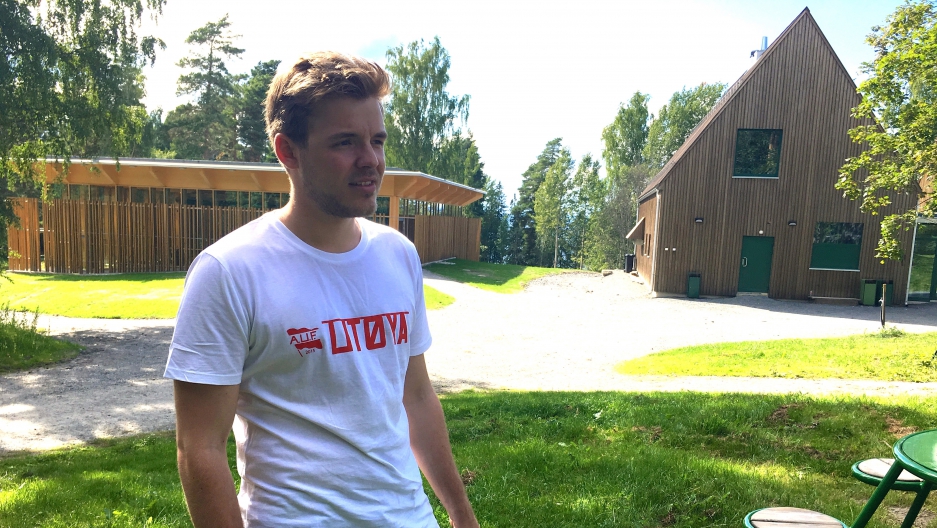 Ole Martin Juul Slyngstadli on Utoya Island five years after the Norway shootings. He says the biggest victory for survivors of the attack like him is that the summer camp remains open and a new crop of kids is arriving next month.

Ole Martin Juul Slyngstadli was 18 and attending a summer camp on Utoya Island when Norwegian nationalist Anders Behring Breivik carried out his deadly massacre there on July 22, 2011.

Dressed in a police uniform, Breivik opened fire, indiscriminately, on staff and campers on the island; 69 of them died, most teenagers. Hours earlier, Breivik had killed eight people after setting off an explosive in Oslo.

Today, five years later, Slyngstadli, other survivors and families of the victims are commemorating this grim anniversary on Utoya, on Tyrifjorden Lake about an hour outside the Norwegian capital.

Slyngstadli, now a law student, says he doesn’t dwell on that that day, but he is reminded of the attack whenever he hears about mass shootings in the US.

“Of course it brings back memories, to me personally,” he says. “Take Orlando for instance. The terrorist there, he didn’t randomly pick one club, he picked that specific club because it was a gay club.”

Slyngstadli says Breivik chose the Utoya camp because of its affiliation with Norway’s Labor Party, which advocates for liberal immigration and refugee policies. In the shooter’s manifesto, Breivik called for Norway to remain a white and Christian country.

Utoya island on Tyrifjorden lake was the site of Norway's worst mass shooting, on July 22, 2011. It's home to a summer camp.

Slyngstadli says he also sees similarities between that xenophobia and some of the anti-immigrant and anti-Muslim rhetoric at this week’s Republican National Convention.

“You have the same problems as in Europe when the far-right extremists win,” he says, noting that in the wake of the ongoing migration crisis and terrorist attacks, nationalist groups have gained influence in Spain, the Netherlands and France.

“It’s the inequality. People feel no one listens to them and nobody talks about their concerns,” Slyngstadli says. “In some way, Donald Trump has hit a nerve there, unfortunately.”

He thinks the pro-Brexit campaign in the UK benefited from this sentiment, too.

Slyngstadli adds that since 2011, his country has moved politically toward the right as well, noting that the political party that Anders Breivik once belonged to now controls the Norwegian government.

While populist movements are attracting supporters on both sides of the Atlantic, Slyngstadli does see a big difference between how Norway reacted with the Utoya massacre and how the US responds to its own mass shootings.

In America, he says the thinking is that the “person who did this has guns so we need to have bigger guns. To me, well, that’s really strange.”

In Norway, only hunters can legally own firearms and police keep their service weapons locked in their vehicles. Slyngstadli says widespread gun ownership isn’t even up for debate. Nor is the death penalty or even life sentences.

Anders Breivik, now 37, is serving the maximum 21-year sentence, though it can be extended. Earlier this year, he won a human rights lawsuit against the Norwegian government for putting him in solitary confinement.

Slyngstadli says that ruling has left him feeling conflicted.

“I’m angry, of course I’m angry — [at] him because of what he did, and because he killed many of my friends and that he tried to kill me,” Slyngstadli says. “Then again, we have some rules, we have some laws and we have to follow them, because if in any way we put them aside, then in some degree he wins a little and I wouldn’t want him to win even the smallest thing.”

Slyngstadli says the biggest victory the survivors have won over Breivik is that the summer camp remains open.

Next month, several hundred children will come back to the island.

The names of the 69 victims of the Utoya massacre on July 22, 2011 are engraved on this memorial that stands alongside the island’s shore.