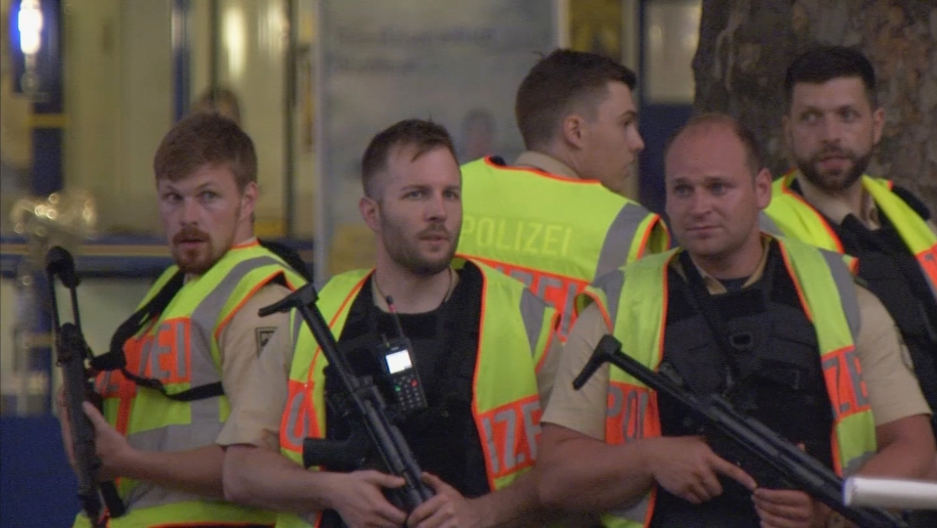 The mass shooting at a Munich shopping mall thrust a whole city into chaos, say those trapped there after the attack on Friday.

Sarah Heinrich, a reporter with M94.5 in Munich, told PRI's The World she could see the helicopters and police — and also got a text from a friend who was at the scene. "I'm super super shocked,'' her friend texted. "I could see people lying on the ground. And there was blood."

Jan-Phillippe Schlueter, a reporter with the German public broadcaster ARD, was, like Heinrich, in the city's center when he learned of the attack. He was in a restaurant with his wife and baby daughter, when he had to leave to get to work — and to get reactions from the crowd.

Everywhere, people were stranded after public transportation remained shut down. "No taxi to be found," Schlueter said in an interview.

"People just try to make their way home by foot. They walk, they hold their cellphones in their hands. They talk to their families, they check online what's actual news,'' he said. "Luckily, I have family here and my brother-in-law has a car, so he will bring me, my wife and our baby child home safely."

Lena Jakat of the German newspaper Süddeutsche Zeitung was with an Iraqi refugee when the attack occurred.

"We were in a coffee shop in the city center, when they said the coffee shop is going to be on lockdown," Jakat said in an interview. "So that's someone whose been here for four years, who actually fled the terror in Iraq, and what was going through my mind was that, even though we don't know anything at this moment, the thought I had, 'Is the terror getting closer to her now here?'"

Munich resident Dominik Faust tells the BBC how he was trapped in a separate shopping center from the one where the shootings took place, after people ran in screaming.

"The security closed the doors to the mall and moved us up to the fifth floor. So this is where I am right now, with about 150 other folks," Faust said.

An Australian tourist, who identified himself as Callum, had heard of the shooting three miles away, but decided to head off to dinner nearby.

Suddenly, "everyone started running, for no apparent reason." He was about a half-mile from the main square, where he said there was a brief report of activity.

Police were everywhere, he told PRI's The World. Streets were deserted within seconds.

Callum made his way back to his hostel, where other stranded guests, he said, "were making the best of a bad situation" — at the bar.

The World's Marco Werman and Lidia Jean Kott also contributed to this report.