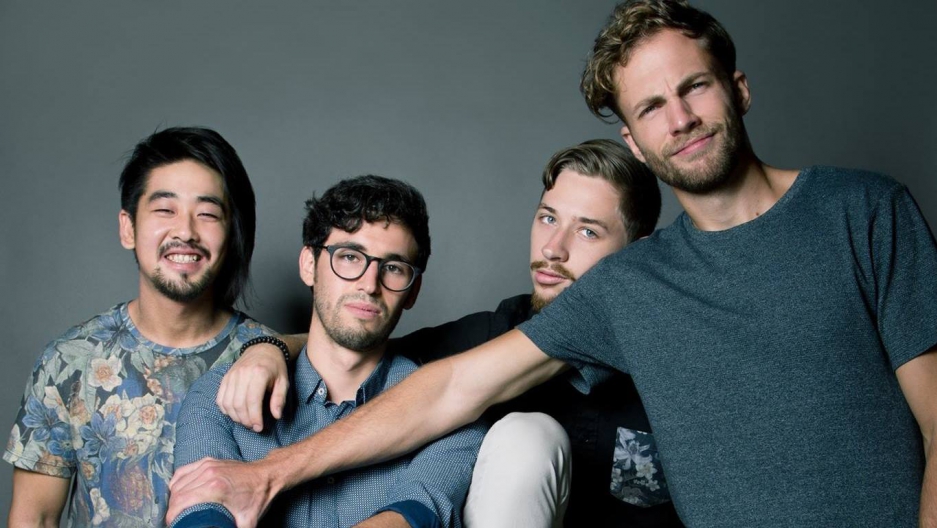 I first saw the band Night Lights in late 2014. I had taken my daughter to a concert at a small venue in Boston. Night Lights were the opening act, playing songs like "Hit the Water" off their first EP.

I loved their sound right away. I thought it had a nice mix of dreamy techno and harder-edge rock. At the time, the four guys in the band were still students at Boston’s Berklee College of Music. They met there as freshmen, and have been playing together ever since.

But after four years at Berklee, they faced a decision. See, Night Lights is a multinational band. Lead singer Mauricio (Mau) Jimenez is from Mexico, bass player Jeff Kinsey is from California, guitarist Yusuke Sato is from Japan and drummer Dag Hanken is from Norway.

So three of the four were in the country on F1 student visas, which expire soon after graduation. That’s made life after college more complicated.

“It’s been challenging looking for ways to support these guys and to figure out how to keep the band in the country so we could keep making music,” said Kinsey, the American in the band.

The other three members were able to extend their stays temporarily. F1 student visas allow for an Optional Practical Training (OPT) phase after graduation. That means they can start working, but only in their area of study. In this case, that’s making music.

But here’s the rub: music students on an OPT extension are not supposed to do non-music work. So, in theory, no waiting tables or washing dishes to help make ends meet between gigs.

In practice, it’s not that clear apparently. “I’ve talked to a few lawyers, and my lawyer says don’t do it,” said guitarist Yusuke Sato, referring to non-music work.

“And my lawyer says do it,” said singer Mau Jimenez.

To be safe, Sato is only pursuing music work while his visa application is pending. Like playing at weddings or giving guitar lessons.

But that only goes so far. And it’s still temporary. That’s why the foreign members of Night Lights decided to apply for a more lasting solution: an O1 artist’s visa.

They’re artists, right? Should be slam dunk. But it’s not.

“The O1’s were created by Congress as a way of addressing the fact that performing artists, or artists in general, are unique in their work and that they’re not replaceable,” said Matthew Covey, an immigration attorney in New York and founder of Tamizdat, a firm that helps artists navigate the US visa process.

“In other words if you want U2 to perform at your festival, it’s not good enough to just have Dave Matthews instead,” Covey added.

In order to qualify for an O1 visa, however, artists must prove that they have exceptional abilities. It helps if they’re global megastars already, like U2 or the Rolling Stones.

The guys in Night Lights are fresh out of college. They’re no global megastars. But they are determined to distinguish themselves.

That’s why they decided to move to Los Angeles. For the past year, they’ve been booking as many gigs as possible there and working on a second EP called "Expectations," which is now out.

I asked Norwegian drummer Dag Hanken if the need to prove themselves worthy of O1 visa status meant more pressure in the recording studio.

“I don’t know if we were thinking like that,” said Hanken. “I wasn’t nervous … like, ‘If I mess up this one take, I might be thrown out of the country!'”

In fact, the band has adopted the opposite attitude: assuming that their visas will come through.

“We’re like working full-steam ahead,” said Jimenez. “We’re working as if we have [the visas] and until proven otherwise we’re going to continue making good music.”

That attitude has paid off, at least for Jimenez. He finally got his O1 visa earlier this year.

But Hanken and Sato are still working with an immigration lawyer to secure theirs. They’re hopeful, but if they don’t get new visas soon, they may still have to leave the country. So the band’s future remains uncertain.

Matthew Covey, the immigration lawyer, understands the goal of the O1 visa program: to regulate which foreign artists, and how many, are allowed to perform in the US. But in a case like Night Lights, he thinks the rules are too strict.

“I think that independent young artists like the ones we’re talking about here contribute an awful lot to American society,” said Covey. “And I think that the bars created to keep them out are unnecessarily high.”

For now, the four members of Night Lights aren’t giving up on their dream of making it, all four of them together as a US-based multinational band. There’s nothing else, they say, they’d rather be doing.