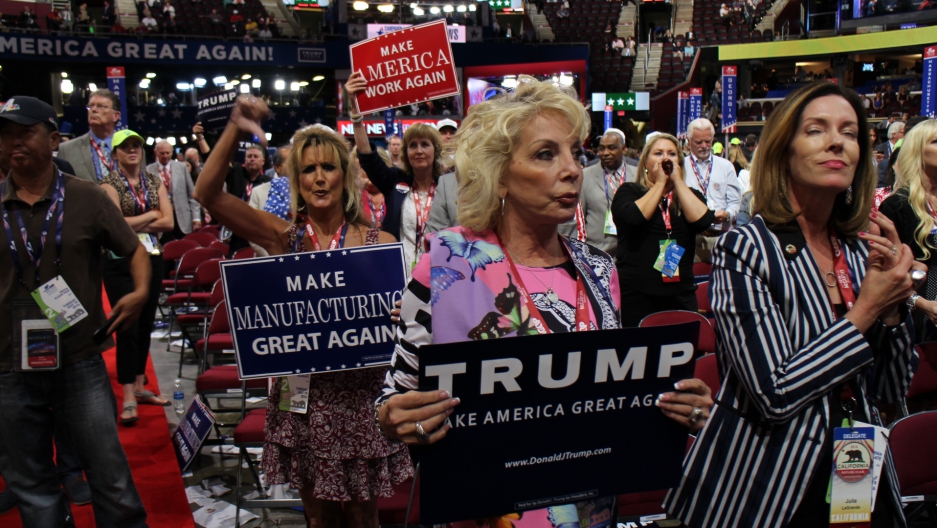 Members of the California delegation react to comments made about international trade on Tuesday, July 19 at the Republican National Convention in Cleveland.

Riled-up crowds are an integral element of political conventions, but watching online or on TV doesn’t quite capture what it’s like to hear them from the convention floor.

This week we’ve been hearing and watching the crowd cheer, jeer and boo their lungs out at the Republican National Convention in Cleveland. Next week, we’ll be looking at the same thing in Philadelphia during the Democratic National Convention, and hopefully drawing some comparisons.

After the third night of the RNC, when former presidential candidate Ted Cruz refused to endorse Republican presidential nominee Donald Trump, the booing was thunderous. But it sounded different from the floor, as some other convention chants did.

Here are some we picked up, and our impressions of them.

These responses have been edited for clarity. 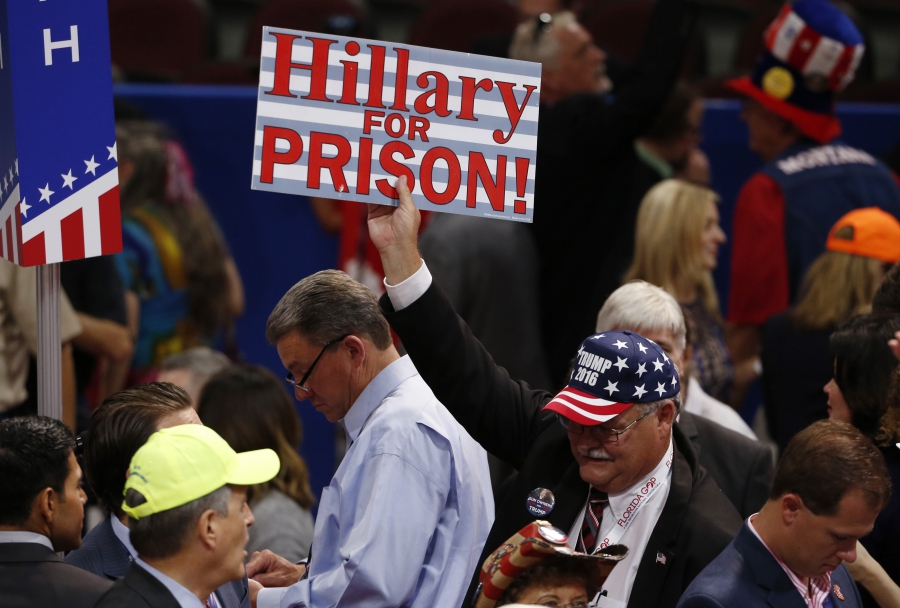 A supporter of Republican U.S. presidential candidate Donald Trump holds up a sign during the first day of the Republican National Convention in Cleveland, Ohio, U.S., July 18, 2016.

Maria: The first thing I think about when I hear this is the fact that Hillary Clinton is a woman. It's quite an aggressive rally with the GOP uniting against the other candidate, which is expected.

But for me, I notice that this feels especially aggressive, just because Hillary happens to be a woman. There's a lot of great things about having a woman running for the highest office in our country, and there are also negatives. Some of these reactions just seem a little bit ... weird. 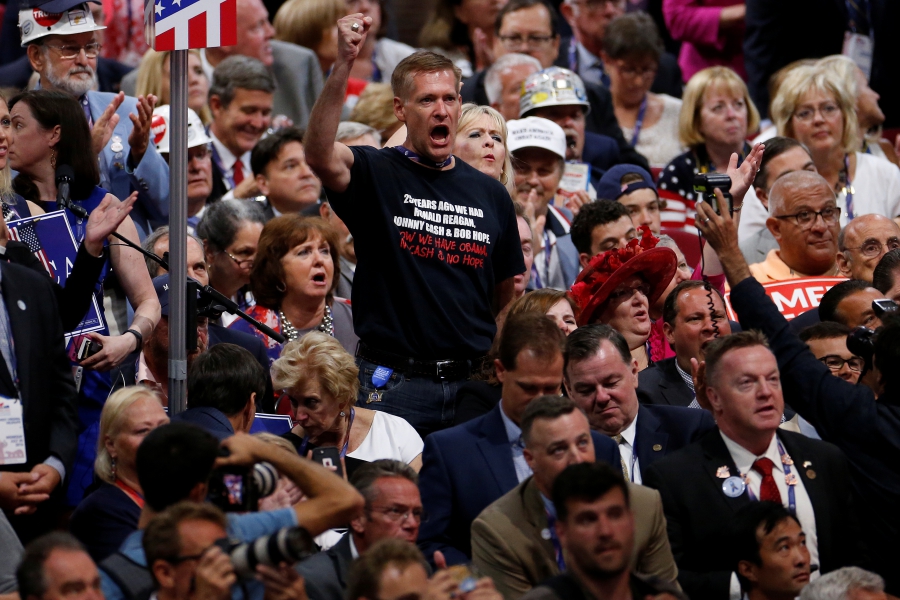 Leo: When I spoke to delegates on the floor, they reminded me very much of Conservative Party activists you would meet in the UK.

They have similar opinions in some areas, but the actual atmostphere, with these kinds of chants and booing, is something that you don't really hear in Britain.

It's something I've struggled to get my head around. In Britain, most conservative activists come from small towns. They have conservative values. They're generally not people who go out in public in fancy dress, or jump up in their seats when they're at the cinema to start shouting at the screen. That wouldn't be a particularly conservative thing to do.

There's part of me that thinks it's quite healthy and cathartic, maybe. But it is a strange contrast. The same delegates you speak to on the floor in the convention center can be speaking to you about how they believe in small government, and how they think that it's important to live quietly and live frugally. That's the same person who will be jumping up, booing the stage and screaming their applause when they hear something they agree with, or chanting "USA! USA! USA!" Five minutes later — when you speak to them — they're calm, quiet and reserved again. 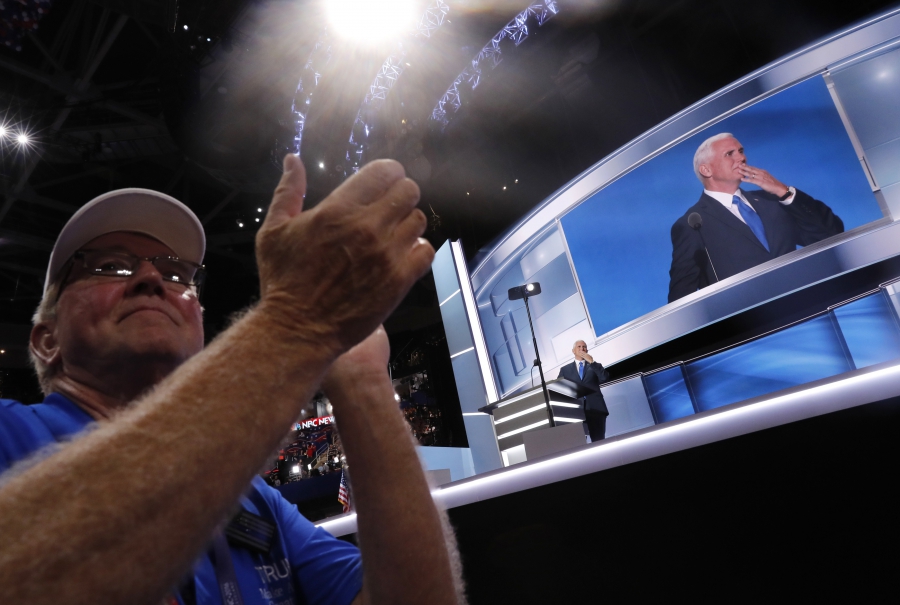 Maria: I thought this was kind of sweet, actually. It's obviously a throwback to "I like Ike," from the Eisenhower years. It was, for me, the first really positive and happy moment. The crowd was rallying around the person on stage in a very innocuous way.

It actually reminded me of when I was in Peru earlier this year, during their presidential elections. I witnessed a demonstration on the street of the two parties marching toward each other, but they were really not hurling attacks at one another. They were just chanting support for their own candidate. 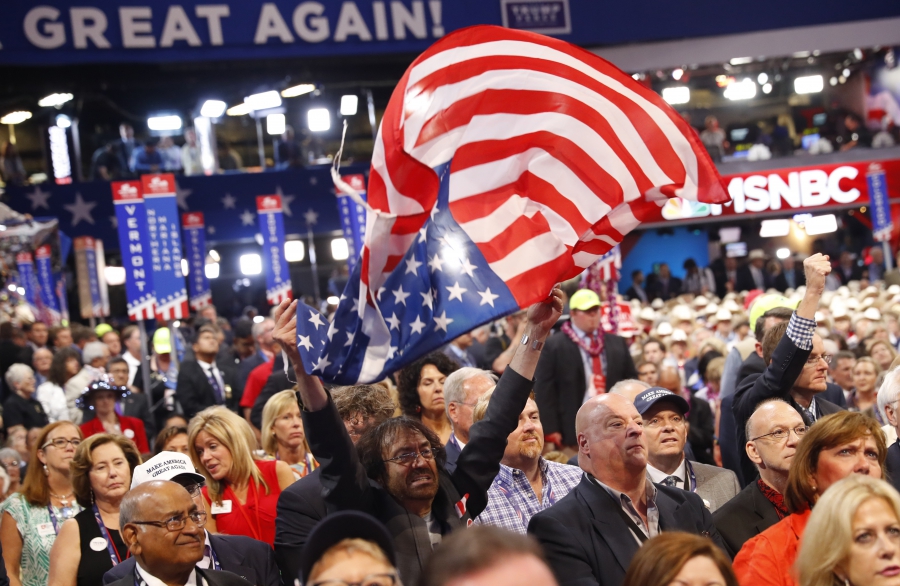 A delegate waves a United States flag during the third session at the Republican National Convention in Cleveland, Ohio, U.S. July 20, 2016.

Our reaction, summed up in a word?

That's the contrast between what you experience on the floor in the convention center, and what you see if you're watching at home. When you see it on TV, I think that some of these chants, like "Lock her up!" or "USA! USA! USA!" they have a kind of energy. But you're not seeing the context. You're not seeing the smiles people have on the convention floor. You're not seeing people bumping into old friends. You don't get the warmth. I know "warmth" might sound like a strange word to use when you're talking about "Lock her up," but there's a real feeling of camaraderie when you're among these delegates.

I talked to this lovely older woman just outside the convention center after one of the nights, and she was just so shy and so excited to speak to a reporter. It was so endearing to speak to her, and she was very nice and very quiet. That's such a huge contrast to being on the floor where — honestly most of the times that I've been there — there's a point in the night where I get goosebumps from the energy of these chants, whether it's positive or negative.

How do you react to these chants? Let us know in the comments below.