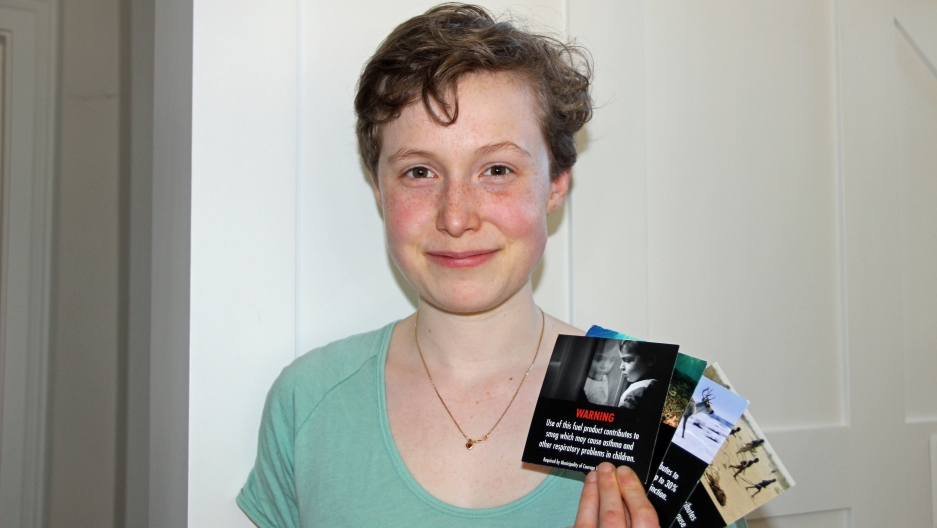 Imagine going to fill up your tank and seeing a label on the pump that says what you are doing was causing climate change.

The city of North Vancouver in Canada is launching a new program to encourage drivers to think about being more energy-efficient when they drive — and that fossil fuels contribute to climate change.

The city council heard about the plan during a presentation last summer by teenage climate change activist Emily Kelsall.

At 18, she's already a seasoned climate change campaigner and public speaker. She learned about an effort by the climate activist organization Our Horizon to get warning labels on gas pumps.

Shirkey worked with the teenager to help her make a compelling case to the mayor and city council.

“She really got our interest, so we did some investigation and found out that, yes indeed, we do have the ability to do that,” says Darrell Mussatto, mayor of North Vancouver.

The council agreed in principle to put the labels on pumps at the city’s gas stations — all six of them. But then came the discussion of what the labels should actually look like.

Kelsall was hoping they would have a strong message.

“It's just like the cigarette labels,” says Kelsall. “If we can put those graphic cigarette labels that are terribly, nasty to look at, we can bring it upon ourselves to put this on something that will not only endanger our health, but the planet's health.”

One of the sample labels that Our Horizon designed bore a photo of children in a drought-ridden area. For obvious reasons, the gas companies weren’t so keen on the idea. 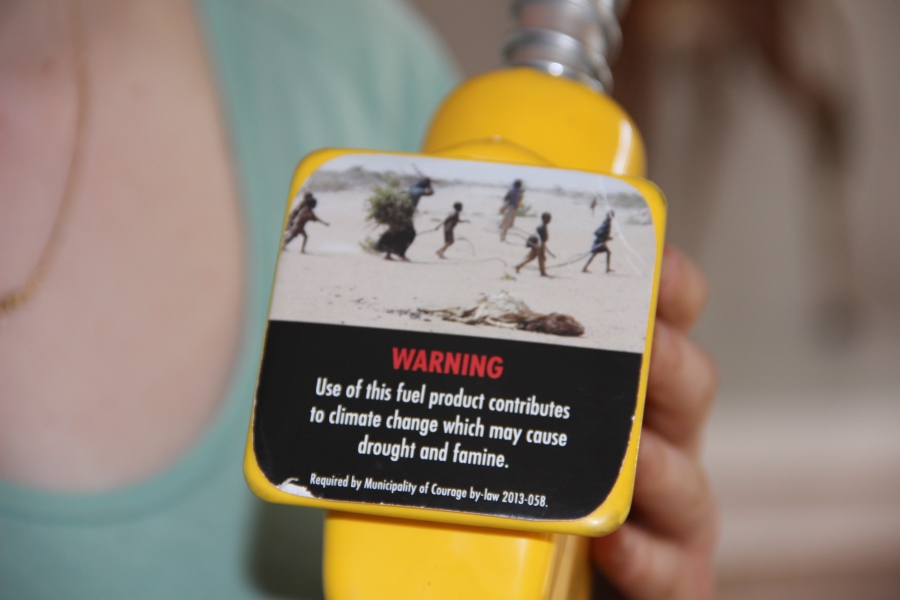 One of the sample gas pump labels created by Our Horizon.

They wanted a set of messages about smart fuel consumption, like taking a roof rack off your car when you don't need it, WITH a sentence making the connection between fossil fuels and climate change.

"People, generally are quite well aware of that connection,” says Andrew Klukas, president of the Western Convenience Stores Association. He represents some of the owners. “We discussed that with the city and they wanted to have one sentence at the bottom making that connection, reminding people that yeah it is about helping the planet, we could do something here and we should do something."

Mayor Mussatto agreed that the gas pump labels shouldn’t be like warning labels on cigarette packs.

"We're not trying to sell death and gloom here," says Mussatto. "What we're trying to do is inform people and help support them make better decisions."

So the labels ended up with a positive message supplied by the gas stations. And a negative one reminding consumers that by squeezing that gas pump, they are contributing to climate change.

But Kelsall isn't discouraged by the compromise.

"I'll admit, driving is a convenient thing. I think the most important thing is that we maintain a conscious awareness about what we are doing, which is what these labels will bring. So, yeah — don't eat meat, drive a hybrid, and take the bus when I can and advocate for the things I care about. I'm a human, just like everybody else though."

And she's getting her blunter message across in different ways — like a slam poem she wrote.

The new gas pump labels will appear in Kelsall's small Vancouver suburb in the coming weeks. Since North Vancouver adopted the idea, other Canadian cities have passed resolutions in favor of similar labels.

And in the US, Berkeley, San Francisco, Santa Monica and Seattle are also considering the warning label concept.