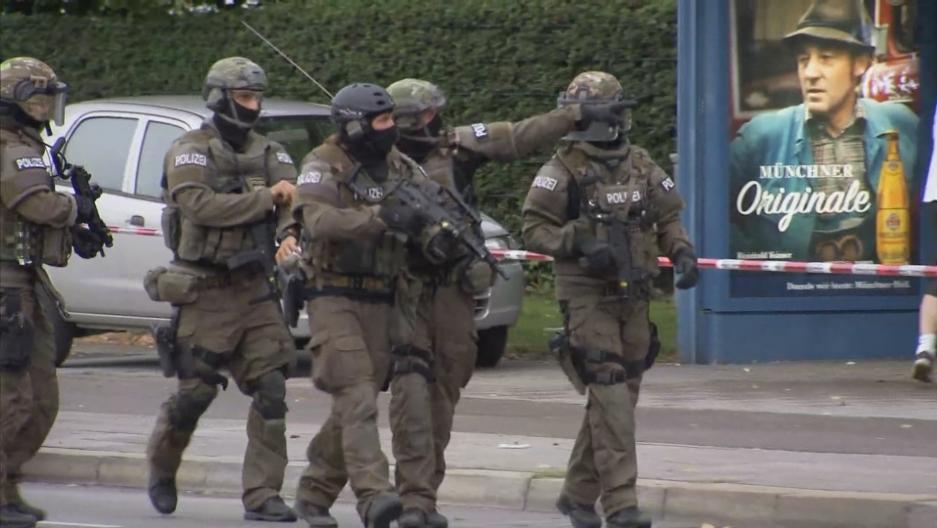 At least nine people were killed and 21 injured on Friday in a shooting rampage at a Munich shopping center before the suspected shooter committed suicide.

Police in the locked-down southern Germany city warned of an "acute terror" situation. What happened:

A shooter armed with "long guns" opened fire at a McDonald's restaurant and continued onto a street before entering the Olympia (OEZ) mall near the Olympic stadium in Munich.

The shooting started shortly before 1600 GMT.

A video posted on social media appeared to show a man dressed in black walking away from the McDonald's while firing repeatedly on people as they fled. The shooter later committed suicide. He was later identified as an 18-year-old German Iranian man from Munich.

Authorities evacuated the main train station in the city of some 1.4 million, while metro and bus transport services were suspended in the wake of the assault.

The shopping center, which opened in the 1970s and bills itself as Bavaria's biggest, was surrounded by armed police, while a helicopter buzzed overhead.

The Olympia mall is near the stadium for the 1972 Olympics and the athletes' village, which was the site of the massacre of 11 Israeli athletes by the Palestinian Black September group.

Was it a terror attack?

A Munich police spokesman told AFP they suspected "terrorism" in the rampage, while German news agency DPA quoted police as warning of an "acute terror situation".

The three attackers were still at large, fleeing in the direction of a nearby metro station, media reports said.

There was no information about the possible motives of the shooting, but Europe has been on alert in the wake of a string of attacks including bombings in neighbouring France and Belgium.

The shooting spree comes on the fifth anniversary of right-wing fanatic Anders Behring Breivik's massacre in Norway that killed 77 people.

US President Barack Obama on Friday pledged support to Germany in the wake of the deadly rampage, as officials said they were working to determine if any US citizens were affected.

Obama, speaking at a meeting with law enforcement officials, said he had been briefed on the unfolding drama in Munich.

"Our hearts go out to those who may have been injured. It's still an active situation, and Germany's one of our closest allies, so we are going to pledge all the support that they may need in dealing with these circumstances," he said.

A statement form the White House soon after described the shooting as an "apparent terrorist attack."

Statement from @PressSec on the apparent terrorist attack in #Munich. pic.twitter.com/bAoTmnpE0V

The violence comes just days after a teenage asylum seeker went on a rampage with an ax and a knife on a regional train in Germany on Monday, injuring five people, two of them critically.

Interior Minister Thomas de Maiziere said the teenager was believed to be a "lone wolf" attacker who appeared to have been "inspired" by the Islamic State group but was not a member of the jihadist network.

The assailant had arrived as an unaccompanied minor in Germany in June 2015 and had been staying with a foster family in the region of the attack for the last two weeks.

In May, a mentally unstable 27-year-old man carried out a knife attack on a regional train just southeast of Munich, killing one person and injuring three others.

Bavaria became the main gateway for hundreds of thousands of migrants and asylum seekers arriving in Germany.

Hate crimes and attacks against migrants exploded after arrivals spiked to more than one million last year, mostly from the Middle East and Africa.

Some 923 offences against refugee shelters were reported in 2015, compared to 175 the previous year, according to figures from the Interior Ministry.