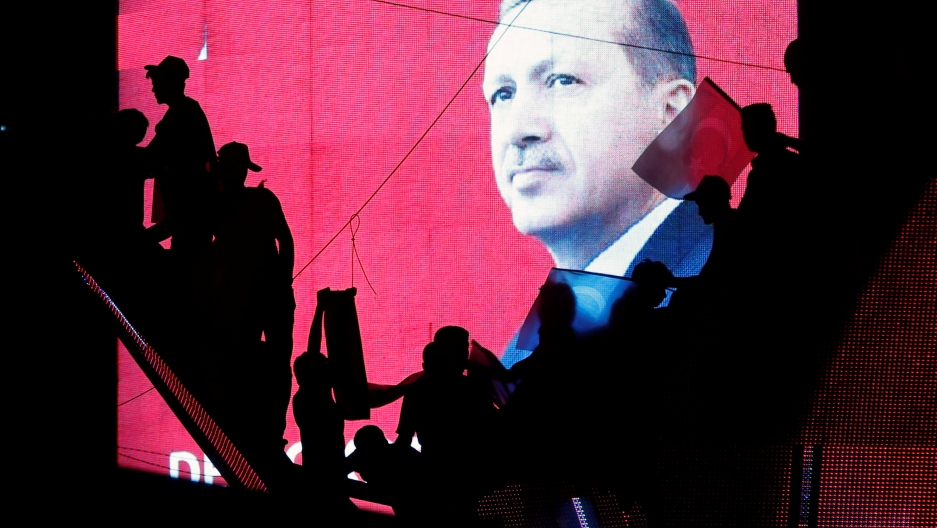 Activists in Turkey are silhouetted against a screen showing President Tayyip Erdogan during a pro-government demonstration in Ankara, Turkey, July 17, 2016.

Turkey's citizens are accustomed to watching their government revile the independent media.

Last week, they saw their leaders lean on those very journalists for their survival.

"The government was saved by what remained of the free press, and the fact that there were open networks and digital networks that often get throttled in Turkey or banned," says US-based social media analyst Zeynep Tufekci.

One example of what Tufekci's talking about: President Recep Tayyip Erdogan calling in via the app FaceTime to CNN's Turkish affiliate during Friday's coup attempt and urged pro-democracy advocates to take to the streets.

"The president called in not to a TV station known as a government-aligned mouthpiece, but one that had retained some semblance of independence," she says. "The journalists who'd been fired because they refused to be government mouthpieces, they turned out to be the most reliable, important sources of information telling us that this was a coup."

Tufekci was on vacation in Turkey last Friday when the military coup attempt began. She says the events she witnessed marked the first time in Turkish history that a coup was stopped by a popular mobilization.

"I saw people jump in front of tanks, climb on top of them, again and again. I saw tanks run over cars and people and then more people rushed them anyway," she says. "The mosque network, which in Turkey is tied to the government, also instead of the call to prayer broadcast a call to resist the coup."

Erdogan has called technologies like Twitter "the worst menace to society." Yet last week he embraced the internet's potential when it suited his needs.

More than 200 people people died after rogue elements of Turkey's military attempted to seize power across the country Friday night. Erdogan called on citizens to take to the streets and show support for his elected government.

After putting down the coup, Turkish officials have begun purges and arrests of those suspected of involvement in the unsuccessful putsch. More than 9,000 people have been detained, the majority from the military. Officials have also suspended tens of thousands of teachers.

Tufekci says some of those actions are justified.

"There has to be some kind of 'Alright, let's figure out what happened and find the perpetrators,'" she says. " So that is understandable. What needs to not happen is to use this as an excuse to further consolidate power."

The crisis offers an opening, she says, to bolster democracy.

"My concerns about freedom of speech and rule of law remain. But there are reasons to be hopeful, there are reasons to think that the scourge of coups, military takeovers in Turkey has finally been eliminated," she says. "Maybe this can be a moment where the government that has been consolidating power for a long time actually reverses course and realizes that the free and independent media and the active culture of rule of law and dissent were essential in beating the coup."