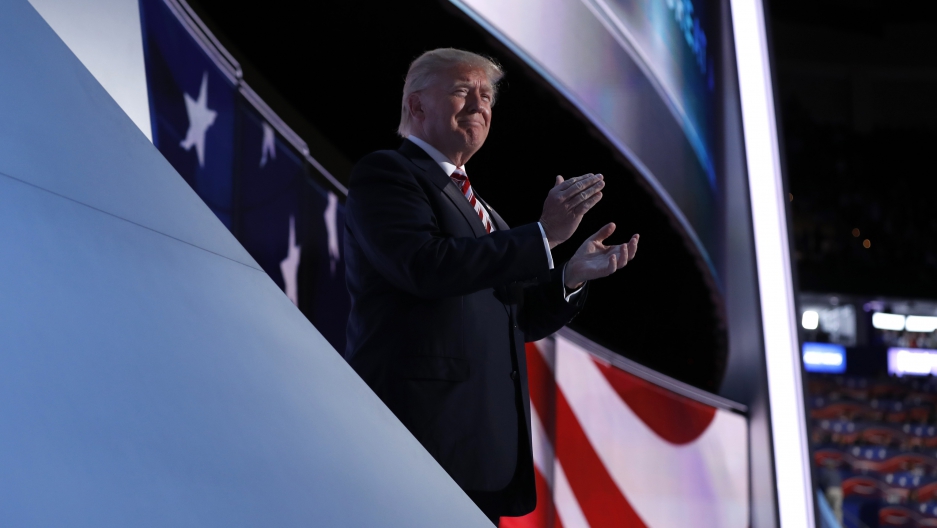 Republican US presidential nominee Donald Trump applauds onstage as his running mate Indiana Governor Mike Pence concludes his speech during the third night of the Republican National Convention in Cleveland, Ohio, on July 20, 2016.

Recent statements by Republican presidential nominee Donald Trump have led some European leaders to worry about the future of NATO — the military alliance that has linked Europe and North America for more than half a century.

For months, Trump has questioned the value of NATO, saying that member states need to increase their defense spending if they want American support. And this week, in an interview with The New York Times, Trump suggested that his administration would consider reneging on its treaty obligation to defend alliance members if they were attacked.

It’s in the Baltic states — NATO members Estonia, Latvia, and Lithuania — where Trump’s comments are most worrying. When asked whether he'd intervene in the event of a Russian attack in that region, Trump didn't give a direct answer.

"You can’t forget the bills," he told the Times. "They have an obligation to make payments. Many NATO nations are not making payments, are not making what they’re supposed to make. That’s a big thing. You can’t say forget that."

“The NATO treaty says that if one member of the alliance is attacked then it is an attack on all of the alliance," Estonian President Toomas Hendrik Ilves says. "That has been the principle of NATO ever since 1949."

“If this kind of treaty is abrogated," he says, "then at that moment the alliance ceases to exist.”

We have had decades of bipartisan commitment to NATO, which has made it the greatest alliance in history. Trump is now threatening that.

Since the signing of the North Atlantic Treaty in 1949, NATO has aimed to provide mutual security for North America and much of Europe. It was a major force in the Cold War, and more recently provided the US with military support for the war in Afghanistan.

Though Ilves says he prefers not to comment on the American election, he did write on Twitter: “We are equally committed to all our NATO allies, regardless of who they may be. That’s what makes them allies.”

We are equally committed to a l l our NATO allies, regardless of who they may be. That's what makes them allies.

"Regardless of who becomes the next president of the US, we trust America,” she said at a press conference in Vilnius. “It has always defended nations under attack, and will do so in the future.”

One of Trump’s recurring criticisms of NATO has to do a requirement that member states spend 2 percent of their GDP on defense. Not everybody's pulling their weight, he says. And he's right. Some member states have failed to meet this criteria — though according to The Washington Post, the candidate has exaggerated the US share of NATO spending.

President Ilves says if Trump remains committed to supporting those NATO nations that do meet their 2 percent commitments, Estonia doesn’t need to worry.

“We have been loyal, committed NATO allies,” he says. In addition to its defense spending, Estonia sent soldiers to Afghanistan in 2003.

In defending NATO, Ilves points to a long history of collaboration between North America and Europe, including the role the US played in the fall of the Soviet Union — an event that restored independence to the Baltic states.

“In our part of the world,” Ilves says, “we look up to the United States and wish it would continue to stand up for the values that have led us to do the revolutions, and the transformations, and the reforms that all of us have gone through in the last quarter century.”