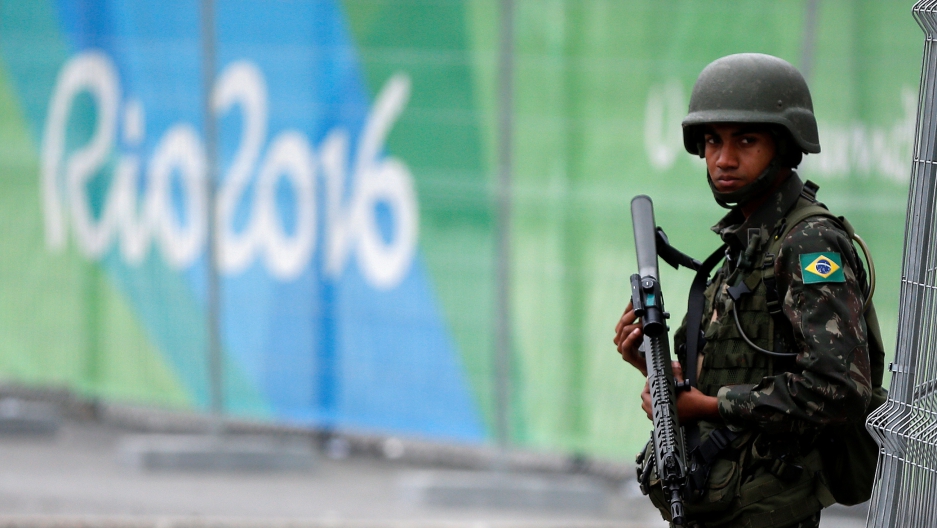 The Brazilian Federal Police this morning announced the arrest of 10 people suspected of plotting acts of terrorism in Rio de Janeiro.

Police officials initially described the detainees as a “terror cell” inspired by the Islamic State group, but Brazil's justice minister said they were “amateurs” who were allegedly radicalized online and had never made contact with ISIS.

In monitored internet communication the suspects had discussed buying AK-47 assault rifles in Paraguay and attacking Olympic sites, Justice Minister Alexandre de Moraes said. He added that they exchanged messages celebrating recent terror attacks. One of those arrested is a minor.

The arrests were made in states across Brazil just two weeks before the Summer Olympics open on Aug. 5. It's a time when Brazil is heightening security in preparation for the games and as many as 500,000 international visitors.

The police operation came as terror-related web “chatter” in Brazil is on the rise, said Robert Muggah, research director of Rio-based security think tank Igarapé Institute. Muggah said Brazilian and international counterterrorism officials have been tracking at least 100 possible suspects for a year in the run-up to the Olympics.

Earlier this week, the SITE Intelligence Group, which monitors extremism online, reported that a group in Brazil called called Ansar al-Khilafah pledged allegiance to ISIS on the messaging app Telegram.

Muggah said it is too early to tell whether today's arrests constitute the squashing of a legitimate terror threat or represent jumpy authorities acting overzealously in the wake of recent terror attacks in Paris, Nice and elsewhere.

“The perception that the threat level has risen is likely to spur authorities to be proactive as opposed to reactive,” Muggah said. “The big criticism in the past of the Brazilian security and intelligence is that they tend to be more oriented around reactionary measures than undertaking prevention and looking for signals.”

A document provided by the federal police described an action code-named “Operation Hashtag,” involving more than 130 officers. The arrests focused on a group calling themselves “Defenders of Sharia.” A nonprofit organization is also being investigated, the document said.

Despite Brazil's reactionary reputation, the authorities do have a history of preemptively arresting possible troublemakers before major events. In the run-up to the 2014 World Cup, officials detained 23 people accused of “illicit acts.” Those suspects have all since been released and none has been found guilty of a crime, said Ítalo Pires Aguiar, a human rights lawyer who defends several of the suspects.

“I don’t know about this new case, but in the case of the 23, it was much more of a political act than an effective act,” Aguiar said. “It was much more about stopping people from protesting than about preventing some sort of illicit act.”