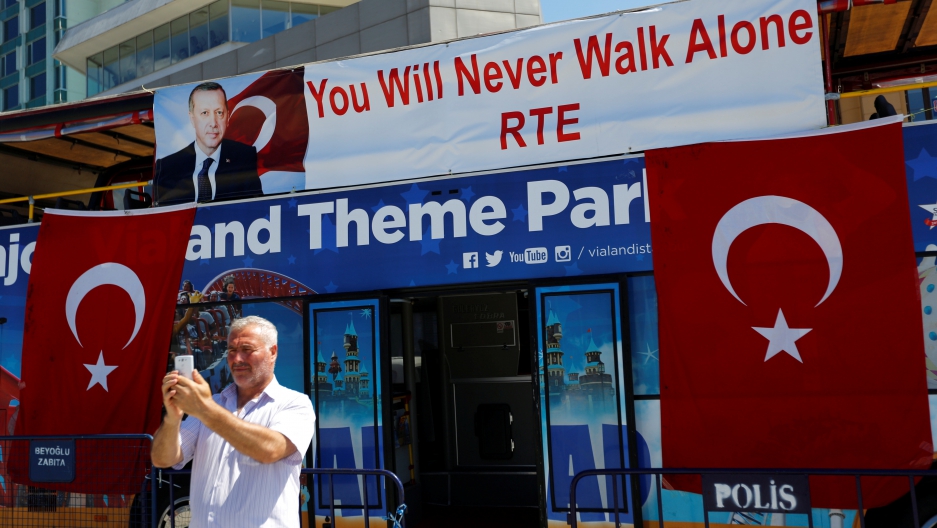 A man takes a selfie on Thursday with a tourist bus, which is decorated with Turkish flags and a banner with the picture of Turkey's president in the background, at Taksim square in central Istanbul.

When I heard the jets overhead, I knew it was real.

Growing up as a Turkish American, I’m familiar with Turkey’s national narrative of fractionalized politics and military coups. Last Friday was a bizarre plot twist. On the unseasonably warm night in Burgaz, a quiet Istanbul island in the Marmara Sea, my parents went to bed early as I lazily scrolled through Twitter in the dark for fear of attack by mosquito.

Social media suddenly went abuzz as the country tried to make sense of an unusual and unannounced deployment of army personnel and fighter jets in Istanbul and Ankara. The question echoing in the Twittersphere: Massive terror alert or coup? Both seemed plausible, reflecting the morbid reality of Turkey today.

While I was raised in California, I had moved to Istanbul in January, and since then I’ve become uncomfortably comfortable with the post-terror-attack choreography in Turkey: turn on VPN to circumvent social media blockage, numbly watch casualty numbers rise, respond to “Are you OK?” texts from friends. Cue debate: is the culprit ISIS or radical Kurdish separatists?

This was surreal. It felt like a plot line from the soap opera on love and politics in contemporary Turkey that I had watched to improve my Turkish before coming to Turkey.

I woke my parents, who had come from California to visit. I’d been researching and reporting on refugees, education and women’s issues in Turkey while immersing myself in the life of the city where my parents grew up. My parents lived through times of heightened political polarization, including three military coups. As I frenetically checked Twitter, my in-house experts took the lead.

“If this is serious, there will be an announcement by the military on TV,” they said. I dismissed them, arguing that social media would trump TV today.

But they were right.

Within minutes, a tense correspondent declared a military takeover on state TV. She was the only woman in the drama of the night.

The immediate reaction was less predictable. President Recep Tayyip Erdogan — safe from capture — was speaking live on CNN from the clutches of a reporter’s iPhone. Using FaceTime, he denounced the coup and urged the Turkish people to convene in public spaces in defiance. “There is no power higher than the power of the people!”

Those were forceful demands coming from the screen many just used to catch a Pokemon.

And with more zeal than PokemonGo could harness, thousands of Turks flooded the streets of Istanbul. My parents and I watched on TV, horrified as panicked soldiers shot indiscriminately into crowds, killing civilians. In response, mobs manhandled soldiers, assaulting them — a bewildering sight for my parents, who had grown up in a Turkish society that revered its conscripted military sons and brothers.

This is not like past coups, my parents said.

My mom has piecemeal memories of political demonstrations leading up to the 1960 coup. Her dad had been a professor at Istanbul University, the epicenter of political ferment. As the coup started he had scaled a wall to escape the security that encircled the campus and ran home to my mom, who was then 5.

My dad‘s first coup memory is a failed attempt in 1962, when the state radio feed was interrupted by martial music and the proclamation of a military curfew. Then fighter jets flew over Ankara and the windows in his neighborhood shattered.

Last Friday, our windows rattled as a jet broke the sound barrier flying over Istanbul.

In the early hours of the morning, my parents and I were huddled in the living room, trying to make sense of the Turkey on our screens. A bombing of Parliament by putschists purporting to save democracy. Mobs of civilians whipping frightened soldiers with their belts. A rare show of solidarity as all major political parties condemned the heinous coup attempt. A palm-sized president inciting thousands to take to the streets. And, eerily, prayers and calls to action rising from mosque minarets in the middle of the night. This is your war, go defend your nation, they intoned. This is how democracy looks in Turkey in 2016.

In 1998, then Istanbul mayor Erdogan invoked a nationalist poem: “The mosques are our barracks, the domes our helmets, the minarets our bayonets and believers our soldiers.” He was promptly sent to jail for threatening the secular state.

It seems that in the early morning hours on Saturday, the president enacted the poem with impunity.

With the help, that is, of a mass text message to all phones registered in Turkey, which I received at 4:45 a.m.: Compatriots, stand up for democracy and peace! I call on you to take the streets against this narrow cadre and reclaim your state!

Some did, others cowed. We went to sleep.

We woke up to the declaration of a “feast of democracy,” an escalating body count, and the beginnings of a mass purge of officers and officials. Transportation in Istanbul has been free for days to facilitate public celebrations, but I couldn’t get on my scheduled flight back to the US — all international flights were canceled for days.

At 5 a.m. Wednesday, seemingly staged celebrations continued at the entrance to Ataturk Airport, the sight of terrorist carnage just weeks before the coup.

My return this week had been planned months ago. I am relieved to be on one of the first flights out of Turkey.

Next time I’m in this terminal, I hope my biggest worry is the weight of my luggage.

Nihal Kayali is a freelance journalist. Her works from Turkey have been published by The Fuller Project, The New York Times and Newsweek.