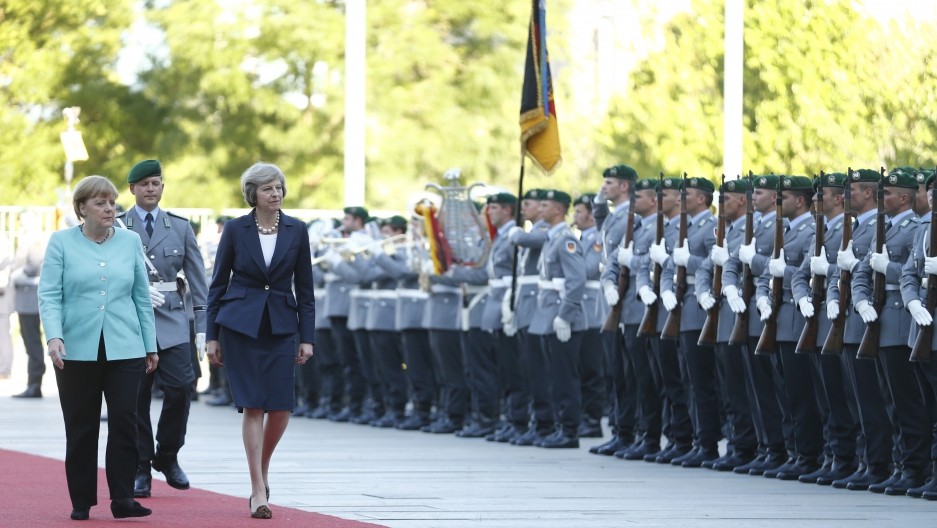 German Chancellor Angela Merkel and Britain's Prime Minister Theresa May (R) review the honour guard during a welcoming ceremony at the Chancellery in Berlin, Germany July 20, 2016.

Britain's new prime minister went to Germany Wednesday for her first official visit abroad — but her country's dramatic breakup with Europe barely even came up.

Negotiations over Britain's exit from the European Union, known as Brexit, will not begin until "our objectives are clear," Prime Minister Theresa May said. And she doesn't plan for that to happen this year.

Many Europeans were upset when the Brexit vote happened. But German Chancellor Angela Merkel said her country respects the UK's decision to leave the EU and that they will still need to cooperate on key issues.

“The UK after all remains part of Europe, if not of the union, and that means we have some missions also to fulfill with the rest of the world,” Merkel said.

But reporters at Wednesday's news conference pressed the leaders on the breakup issue. “Brexit means Brexit and the United Kingdom is going to make a success of it,” May responded. However, she added, “We are not walking away from our European friends.”

Besides, there are tons of other topics they need to talk about, immediately. Those include the refugee crisis, the Syrian civil war, terrorism in Europe, Turkey after the attempted coup, and what to do with Russia. 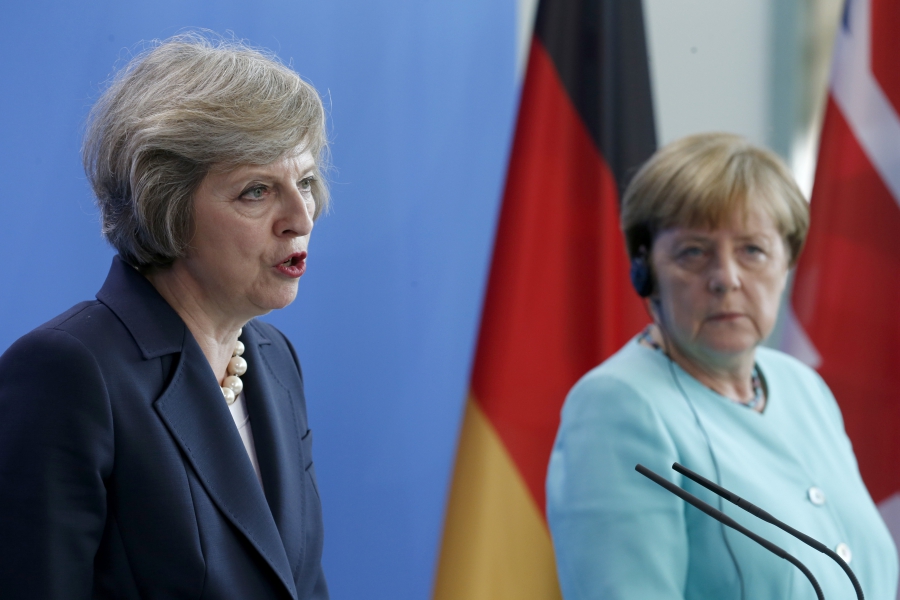 Constanze Stelzenmüller, a senior fellow with the Brookings Institution's Center on the United States and Europe, said she believes Merkel and May will be able to cooperate well.

“I suspect that Angela Merkel is very relieved at seeing somebody in charge who appears to have a level-headed approach to things and means business,” Stelzenmüller said.

Media outlets are pointing out a range of parallels between the two leaders. For instance, as Kate Connolly of the Guardian reported, “both are the daughters of pastors and are childless. Both are viewed as being skilled at getting what they want.”

“Angela Merkel has been very good at putting male potential rivals in positions of responsibility and power” — and, if they misstep, she'd distance herself from them as “they disappear into political oblivion,” Stelzenmüller said.

As for the British leader, “it’s noticeable that Theresa May has put the three chief 'Brexiteers' — Liam Fox, David Davis and Boris Johnson — in key policy positions for executing Brexit,” Stelzenmüller said. It's worth watching how May reacts if one of them were to slip up.

Some observers have also noted a milestone: the first official meeting in which both Britain and Germany have female leaders. But Stelzenmüller doesn’t believe that the topic of gender is so central to their encounter.

“Frankly, I think that that has become less and less important,” Stelzenmüller said. “I remember the condescension and the derision around women in office 20 years ago … I think we’re well out of that particular mind set.”