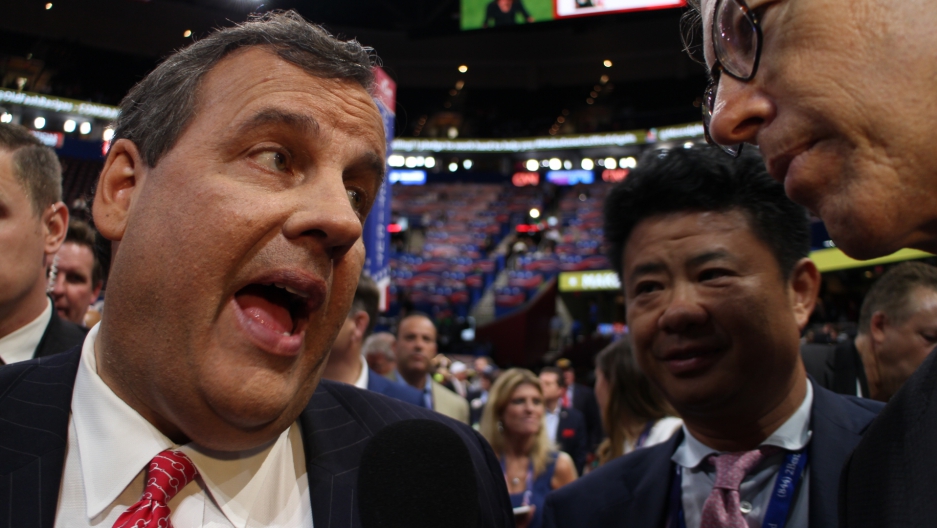 Gov. Chris Christie speaks to reporters at the Republican National Convention on July 19, 2016.

At the Republican National Convention on Tuesday night, Chris Christie declared, "Tonight, as a former federal prosecutor, I welcome the opportunity to hold [Clinton] accountable for her performance and her character."

By the end of the 15-minute speech, the New Jersey governor had led the delegate crowd — a "jury of her peers" — in a heated back-and-forth, declaring the presumptive Democratic nominee "guilty" on all counts.

"We need to demand more than what Hillary Clinton offers for America. ... It is time to come together and make sure that Donald Trump is our next president," Christie said.

It was a convincing performance in defense of an America Christie apparently thinks is at risk. We stopped the governor on his way out of the convention hall and asked him to expand on what he thinks it means to be an American in 2016.

"I don't think it means anything different today than it's meant all along," he said. "[In the] time I've lived, it's about opportunity, it's about freedom, it's about hard work, it's about family, and it's about believing in something bigger than your own self-interest."

His answer sounded surprisingly reasonable after all the theatrics onstage.

"I'm sure she does, I just don't agree with how she'd get there," he said.

Check out our Instagram feed for more portraits of convention-goers talking about what being American means to them.