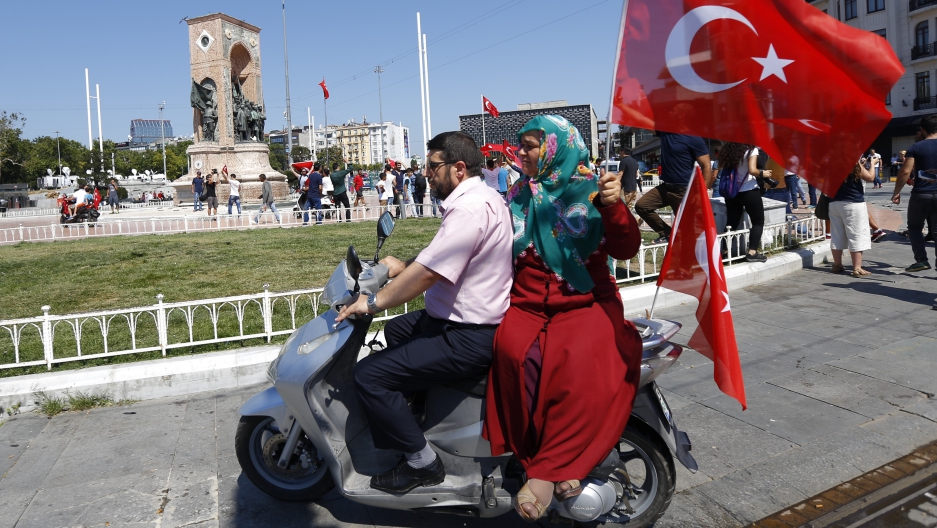 A woman holds a Turkish flag as she sits on a scooter near the Taksim Square in Istanbul on Saturday.

In the days after a failed military coup shook Turkey, women say they are being silenced.

From the start of the coup attempt by military officials on Friday through to the government’s crackdown in response, women’s voices have been almost entirely absent.

Images of protesters on the streets are mostly men. The military leadership is entirely male. The government is 85 percent men, with only one female minister. Currently, 43 cities don’t have any female representatives at all.

Publicly, the fact that mostly conservatives are holding vigils at the squares might be a factor in women’s absence, too. At least one religious group, namely the Ismailaga movement, issued a decree stating that they've decided the women will stay at home and pray while the men will go out to the streets to support the government.

Some women’s groups say they are being specifically targeted. On Twitter, many women talking about the coup attempt are reporting an increase in harassment on the streets. Others are railing against misogynist language used by all sides, reducing women to pawns, or spoils of war.

“The coup, the war, AKP’s backwardness or jihadist mobs … they all target women,” said University Women’s Collective, a popular feminist group, in a recent statement. (AKP is the Turkish acronym for the ruling Justice and Development Party.) “They use sexual harassment against women’s [quest to] exist freely. They are enforcing their manhood by threatening to rape the wives or daughters of the declared enemy. Women must defend themselves.”

The events of the first few days after the failed coup don’t suggest otherwise. On Saturday, the day after the coup attempt, Veysel Taskin, an executive with the Trabzonspor soccer club, tweeted: "The properties and the wives of the infidel coup-plotting bastards are spoils of war."

Taskin ended up resigning from his post following the uproar, but he wasn’t the only one to objectify women as booty in these precarious times. A widely circulating video online allegedly shows a police officer asking an imprisoned soldier who supposedly took part in the failed coup d'etat if he has a daughter. He then threatens: "I'll f*** her!"

Reports of sexual harassment and violence against women have also increased since Friday. One woman tweeted that a man threatened her sexually while asking for a cigarette.

Another said that she was approached by a stranger in the subway who consecutively told her not to wear a dress. Yet another one was told to conceal her cleavage by a man who drove his car toward her at high speeds. A young woman tweeted that people celebrating the government’s survival after the overthrow attempt shouted at her as they drove by: "Bitches, you too will get what you deserve!"

“Conflicting environments, such as war or military coups, always increase violence and discrimination against women” says Selen Dogan, the chairman of the feminist group Uçan Supurge (Flying Broom). She explains that “these conflicts involve militarism, nationalism and religious motivations, all of which negate demands for freedom, equality and non-violence.”

Human rights are under threat in Turkey as people empowered by lawlessness, chaos and conflict take to the streets, Dogan says.

Burcu Karakas, a journalist well-known for her coverage of women’s issues in Turkey, is pessimistic. She sees the latest crackdown on human rights in Turkey as an extension of what the ruling government has been doing for years.

“AKP’s misogyny is nothing new,” she says. “Hard days are ahead of us. Everything will get harder as conservatism thickens.”

As opposed to many countries in the region, Turkish women are legally protected in almost every aspect of their daily lives. However, under AKP’s rule, the application of these laws have become open to interpretation.

Today women have to jump through various hoops to get an abortion even though it’s still legal. Women who go to the police seeking protection from their abusive husbands are forcefully returned home by officers. Men who kill their wives receive reduced penalties for scandalous reasons such as having a respectful appearance.

President Recep Tayyip Erdogan himself has said several times that “men and women could not be equal.” In 2011 he questioned whether a female protester was “a woman or a girl” in reference to her sexual history. He’s been asking all his followers to have at least three children. Not surprisingly, in June, he declared that “a woman who refuses motherhood is half a woman.”

Now, following the failed coup and the government's expected suppression of civil liberty groups, feminists are afraid that the tone set by the government will further spread to strip women of their rights.

Karakas says she has, for the first time, found herself staying home at night for fear of the instability. When she does go out, she changes how she dresses out of fear of invoking the anger of a conservative or unwanted attention.

“I believe it’s going to get worse after the coup attempt,” warns Karakas. But she declares that she is undeterred: “The only way to stand against it is solidarity among women.”

Ersoy is a Turkish journalist, living in Istanbul.

RELATED: The state of women in Turkey, from the director of the acclaimed film 'Mustang'