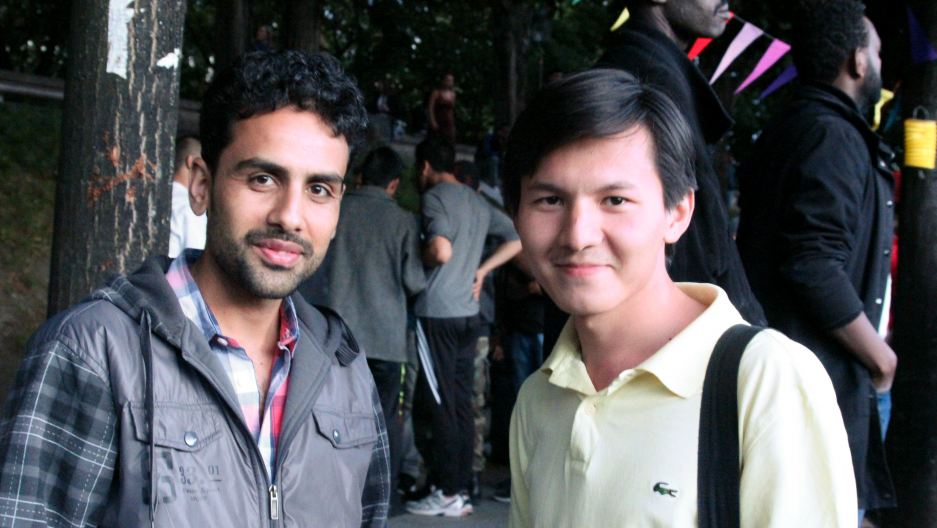 Obaidullah Naseri and Mortaza Behboudi at the Migrants' ball in Paris. Behboudi, right, is an Afghan journalist who sought aslyum in France.

Summers in Paris mean long days, light until after 10 pm. On a cool evening last week in a plaza in a northeastern neighborhood of the city, a couple hundred people gathered around a DJ booth — some dancing, some just standing around talking as the bass thumped across the park.

Over the past year, the growing number of refugees living in visible, public encampments has worried many Parisians. Repeated efforts to dismantle the makeshift camps have sometimes ended in confrontations between the squatters and police. A group of volunteers that usually provides things like food and other necessities to the people living in the streets decided to create an event to generate different images of refugees in public spaces.

They organized a dance party.

“Everybody like[s] to dance,” says Nasrullah Daulatzai, an Afghan refugee from Kabul who’s been in France for 18 months. “But it’s not all the time this [kind of thing] happens.”

The organizers called it the Migrant Ball, inviting DJs to play world music for a crowd that grew over the course of the evening.

“The problem is that the relationship between Parisians and migrants is often one built around need,” says Isimat Mirin, half of a duo called Les Fumisteries, which was invited to perform.

Quentin Morlo, who works with refugees as a volunteer, chimes in. “This event is a change from the usual charity,” Morlo says. “Maybe it’s a little utopian to say that just one time a lot of people will talk with one another — but it’s a first step.”

There are families and children here but the majority of the new arrivals are young men, many from Afghanistan or countries in sub-Saharan Africa.

Mirin acknowledges that there’s a lot of negative news and imagery surrounding the arrival of migrants and refugees in Europe over the past year. That includes the mass sexual assaults in the German city of Cologne during New Year’s celebrations, reportedly mostly by young North African migrants.

“I think it would be good to try to counteract the energy of that,” Mirin says.

Salim Ben Khalid, a passerby who stops to listen to the music, says, "In France, there’s often a disconnect between the French and the foreigners.”

Khalid, who moved to France from Tunisia nine years ago, stresses that it doesn’t have to be that way, but he thinks it is important to do things actively to bridge that gap.

Maybe one way can be music, he adds.

But Mortaza Behboudi hopes that people will hear not just the dance music — but also the refugees’ accounts of their living conditions in Paris.

“People should know about their stories,” Behboudi says. The 22-year old photographer and journalist from Afghanistan has spent most of his life as a refugee in Iran and arrived in France only recently. He’s living with the family of a French journalist. But it’s not far from here to the elevated metro tracks that have at times sheltered hundreds of people.

“I’m thinking about the others sleeping with their families in the street at night. It’s so difficult for them,” Behboudi says.

Each refugee has their own story.

It’s important, Behboudi says, that someone hears you.