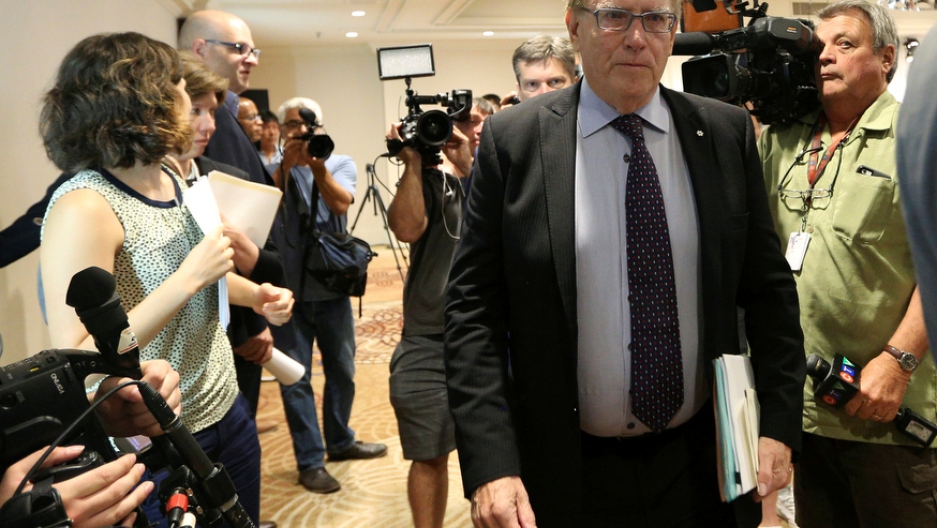 Richard McLaren, who was appointed by the World Anti-Doping Agency to head an independent investigative team, walks out off the room after presenting his report in Toronto, Canada on July 18, 2016.
Credit: Peter Power
Share

The International Olympic Committee said Tuesday it will study "legal options" on banning Russia from the Rio Games and ordered disciplinary action against Russian officials implicated in a state-run doping system.

The IOC executive held emergency telephone talks after a World Anti-Doping Agency commissioned report said there had been state-sanctioned doping at the 2014 Sochi Winter Olympics and other major events.

The IOC "will explore the legal options with regard to a collective ban of all Russian athletes for the Olympic Games 2016 versus the right to individual justice," said a statement.

But the Olympic leadership said it will have to wait for a Court of Arbitration for Sports decision expected Thursday on the case of 68 Russian athletes appealing against an IAAF ban.

The IOC also said it would have to study the bombshell report by Canadian law professor Richard McLaren which detailed the Russian cheating, organised by the Sports Ministry and using the FSB intelligence service.

A final decision would also depend on the WADA code and the Olympic Charter, the IOC said, giving an indication of the legal battle ahead.

The executive ordered a re-analysis of all samples by Russian athletes taken at the 2014 Sochi Winter Olympics and action against the sports ministry.

The IOC said it had "started disciplinary actions related to the involvement of officials within the Russian Ministry of Sports and other persons mentioned in the report," said the statement.

The Olympic leadership also called for a halt to international events in Russia.

"Because of the detailed references to the manipulation of samples during the Olympic Winter Games Sochi 2014 the IOC asks all International Olympic Winter Sports Federations to freeze their preparations for major events in Russia," it said.

The IOC said this should include world championships, World Cups or other major international competitions and said winter federations should "actively look for alternative organisers."