A model of a new Orange Line subway car that will be built by CRRC MA. The new cars should start rolling out in 2019.

Here in Boston, we have a love-hate relationship with our subway, called the “T.”

The clickety-clack of the old rail lines can be charming, and Boston has an extensive underground network. But the subways are jam-packed during rush hour and sometimes unreliable, especially come winter.

And the cars? Many are old. Some have been carrying passengers for 46 years. But in about three years, Boston riders should start enjoying 284 new Chinese and American-built railcars. And they sound pretty teched out.

CRRC is the largest railcar maker on the planet. But Boston marks the Chinese state-owned company’s first foray into a US market. When Massachusetts officials selected the company, it agreed to perform at least 60 percent of the work in the US.

“Simply put, the shells are designed in China, and everything else that goes into the car — all the electronics, everything, all the technology — that’s all happening in Massachusetts,” said Rivera. 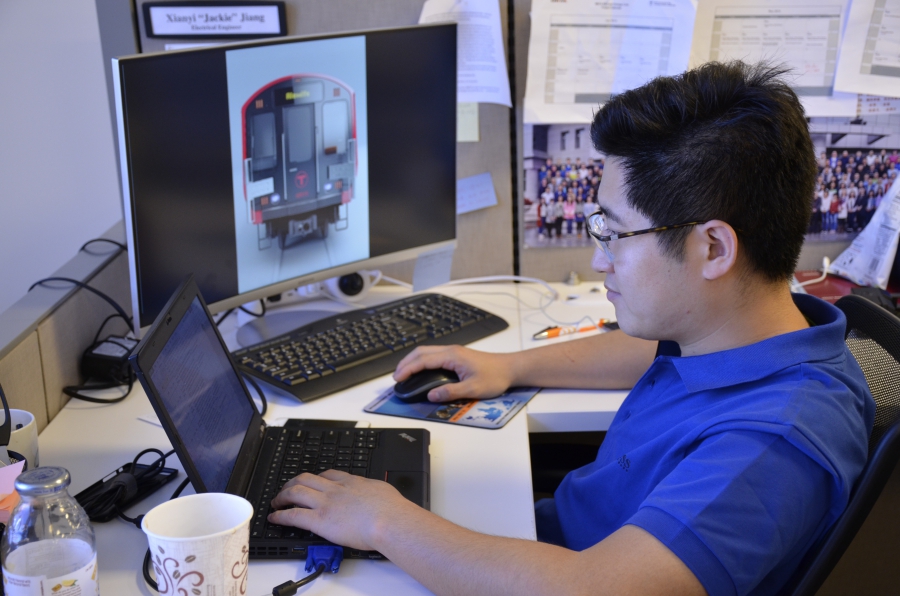 Chinese and American engineers are working side by side in Boston to design new subway cars.

The subway cars, for the Orange and Red Lines, will be built in Springfield, Massachusetts, a city of 154,000 people almost 100 miles west of Boston. The cars will also be painted for the appropriate color in Massachusetts.

Kevin Kennedy, Springfield’s chief development officer, has seen his city’s slow and steady decline over the past four decades, a familiar tale in manufacturing centers across the country.

“I was born and raised here and have been here for all 64 years,” Kennedy said. “We used to have the Indian motorcycle; that was big and prominent here. We had the Duryea automobile. We had the GB airplane. Actually the first Rolls Royce in America was made here in Springfield.”

Springfield hit rock bottom in 2004 when the city was taken over by a Finance Control Board, with appointments from the state of Massachusetts.

In about a year, CRRC’s new factory will be up and running. Today, it’s a largely vacant 42-acre lot.

This alone won’t transform the area. “But psychologically, the fact that manufacturing is coming back to a city that formerly has a history of manufacturing, is really the big thing. Perception, the psychology that goes with that,” he added.

The construction site for CRRC MA's new factory in Springfield. The Westinghouse Corporation once owned this land.

At the same time, there’s been some grumbling about a Chinese manufacturer setting up shop in Massachusetts. It’s expected: politicians love to vilify China. Donald Trump speaks derisively, often, about how Chinese manufacturers have taken American manufacturing jobs from America.

In this case, that’s unfair. William Ibbs, a civil engineering professor at the University of California, Berkeley, said US companies haven’t built railcars for about 20 years.

“It was a slow business, and it was also an erratic business. There wasn’t a real steady demand,” said Ibbs.

Canadian, Italian, Japanese and Korean manufacturers have largely filled the void, supplying rail cars to American cities. And now the Chinese are getting in on the action.

Of course, there’s always a risk going with a new supplier. A few years back in Boston, riders on new T cars were literally sliding out of their seats — the chairs were made from different materials and were a few inches wider. (People got used them pretty quick though.)

Ibbs says he’s seen things go the other way as well, with people bunched too tightly on foreign-made cars.

“I’m not going to name the country, but the residents of that country are smaller in stature than Americans. So they had sized the seats according to their domestic population rather than the American butt, if you will,” said Ibbs with a laugh. “That might not be the most polite way of putting it.”

Posterior-sizing aside, Ibbs says going with an established Chinese firm is a small gamble and one well worth taking — Boston is getting a great deal to upgrade aging infrastructure. CRRC’s bid was $566 million, hundreds of millions lower than most of its competitors.

CRRC also recently won a contract to build nearly 1,000 railcars for Chicago — they’ll be built on Chicago’s South Side. Ibbs says the Chinese are bidding low, now, thinking about the long game.

“They want to get into this market because it’s not only providing the cars at the outset of their life, it’s the servicing and the future business prospects that they’re looking for,” said Ibbs.

CRRC is also pursuing railcar contracts in Los Angeles, New York, and Philadelphia. If the company wins, those cars could potentially be built at Springfield’s new facility.

So while some politicians continue to attack China, many local leaders, like Kevin Kennedy, are trying to make their cities more attractive to Chinese investors.

“No matter what country they’re from, they’re going to be paying American taxes, whether it be income taxes or whether it be property taxes that we will be collecting here in Springfield,” Kennedy said. “The source of where it’s coming from really doesn’t matter.”

Some of Boston's Red Line cars are 46 years old. They should be replaced beginning in 2019.