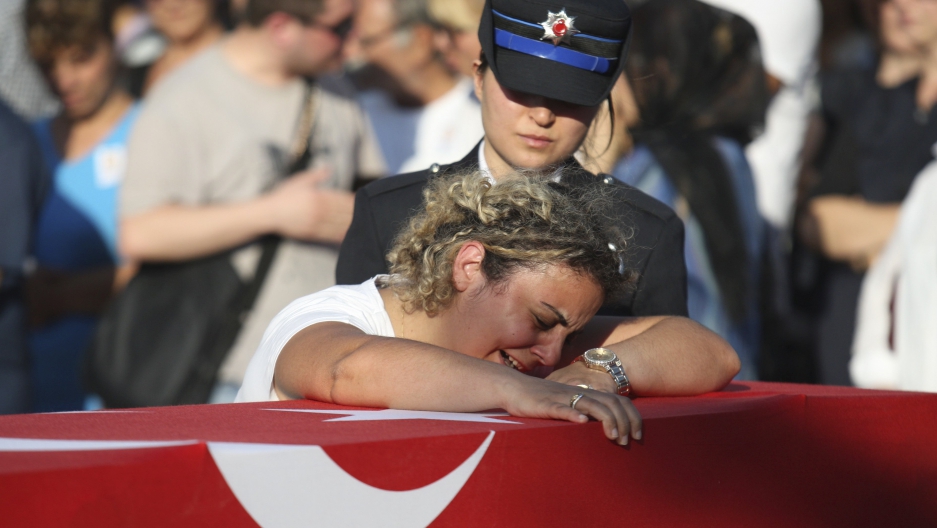 A relative mourns over the coffin holding body of police officer Nedip Cengiz Eker during a funeral ceremony in Marmaris, Turkey, July 16, 2016.

Just days after a failed military coup, Turkey is attempting to revert back to normal, at least during the day.

But at night, President Recep Tayyip Erdogan’s supporters keep marching in the streets, just as he asked them to.

They “wave flags, chant slogans and come out in thousands to the central squares of Istanbul and Ankara,” says Zia Weise, a journalist in Istanbul, Turkey's cultural center and largest city.

“Parliament and various government buildings are guarded by hundreds of police who say they’ve been there nonstop for 72 hours," she says. "There’s also clean-up starting. Obviously the parliament was damaged severely at the entrance. The assembly lobbies and police station looks like it was bombed. There are images showing charred walls, bombed out cars; burned out rooms. The situation in [the capital] Ankara is still far from normal.”

Since the botched coup, there's been talk of reintroducing the death penalty. More than 9,000 people have been detained or arrested, some 6,000 of them military personnel. The numbers rose by the hour on Monday.

“Officials tell us that the majority of these military personnel are actually foot soldiers and conscripts. These very young men told people who asked them ‘why are you here?’ that they thought that they were actually taking part in an exercise — a training exercise simulating a terror attack,” Weise explains.

These thousands of detainees are being held in various locations around the country.

“At least 800 are being detained in a sports stadium in Ankara. It’s uncertain when or where they will face justice. We don’t only have the military personnel, for some unknown reason, they’ve also arrested nearly 800 judges and prosecutors. It’s a severe blow to the judiciary which is already very weak and losing its independence,” Weise says.

At a mosque in Istanbul Sunday evening, an emotional Erdogan promised to purge the Turkish state of dissidents, blaming exiled Islamic cleric Fethullah Gulen for orchestrating the coup.

Discussion of bringing back capital punishment, which was outlawed in 2004, has created tension between Turkey and its EU and US allies, Weise says.

“It suggests that the majority of people calling for the death penalty value revenge more than, say, its European Union accession. For example, Angela Merkel has warned that if Turkey would reintroduce the death penalty that would mean the end to Turkey’s EU accession bid. And still, Erdogan and the Prime Minister Binali Yildirim have said they would consider reintroducing the death penalty after abolishing it more than 10 years ago.”

While Turks who support the government responded to Erdogan's call to take to the streets to on Friday, many chose to stay safely indoors. One of them was Furkan, who lives in Istanbul. He chose not to use his last name for security reasons.

Furkan was having a "typical Friday night" when he first heard that a coup was going on.

Furkan does not support Erdogan and the ruling party, but he was also staunchly against a military coup. "I can only support the voice of the nation as a result of elections. I might not like Erdogan but the way he should go is not like this," he says.

Like many Turks, Furkan has a lot of questions about this coup attempt. "They couldn't block the internet, they couldn't block television," he says. Shutting down telecoms and electricity has been standard for past coups in Turkey; the fact that it didn't happen this time led to many conspiracy theories surrounding the coup.

The most "intelligent and convincing" theory, according to Furkan, is that "the government knew about [the coup attempt] but didn't act on it, in order to increase [popular] support."