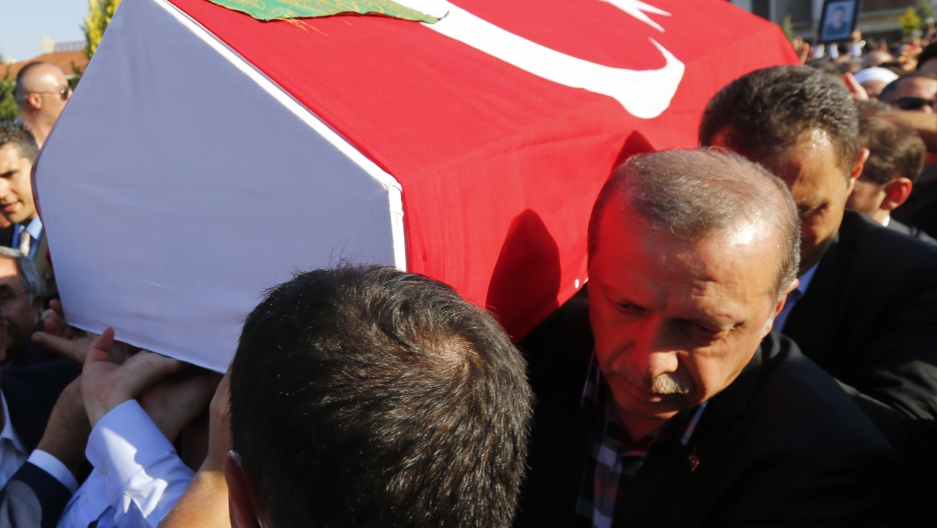 Turkish President Recep Tayyip Erdogan helps to carry a coffin with a victim of a thwarted coup. The funeral was Sunday in Istanbul.

The post-coup crackdown in Turkey has been been swift and brutal, concerning observers that the country may be pushed closer to authoritarianism and away from democracy and the rule of law.

Some 6,000 people, mostly soldiers, have been detained on charges of high treason, and more than 2,700 judges and prosecutors were purged Sunday for alleged links to the coup plotters. Authorities issued arrest warrants for another 188 high court judges, and Prime Minister Binali Yildirim has said the ruling AKP party will consider bringing back the death penalty for perpetrators. On Monday, the government said 30 governors and 8,000 members of the police had been replaced.

The moves alarmed some.

“We call for the full observance of Turkey’s constitutional order and we as European Union stress the importance of the rule of law,” EU policy chief Federica Mogherini told the press during a meeting of the EU’s 28 foreign ministers, according to the Guardian. “We need to have Turkey respect democracy, human rights and fundamental freedoms.”

While a crackdown was inevitable after the bloody coup, the country stands at a key crossroads, according to Brookings senior fellow and scholar Shadi Hamid.

“There have to be punitive actions and coup plotters are going to be arrested and targeted, that’s to be expected,” he says. “But the danger is after a coup, a country like Turkey cracks down too aggressively or overreaches and casts the net too widely.”

Hamid is a longtime observer of Turkish Islamists and their hardline leader Recep Tayyip Erdogan. His latest book, "Islamic Exceptionalism, How the Struggle Over Islam is Reshaping the World," includes a chapter on the evolution of the AKP, drawing on interviews with current and former AKP figures.

As is so often the case for the ruling party, Hamid thinks that much of what happens next all comes down to Erdogan himself. So far, he sees little reason for optimism.

“A lot hinges on this question of, is Erdogan able to take a step back and realize that he has gone too far, that his policies have actually contributed toward more polarization? He hasn’t had that realization yet, but it’s moments like these that can provoke some rethinking,” Hamid says. "I’m doubtful that will happen but that’s what I’ll be watching for: to what extent does Erdogan change as a result of this?”

As Washington Post journalist Ishaan Tharoor noted, Erdogan’s critics called him paranoid when he aired concerns about conspiracies against his government during election campaigns last year. He had cited a possible foreign “crusader alliance” and referred to “Gulenists,” a movement based on the teachings of Fethullah Gulen, a cleric living in exile in Pennsylvania, whom Erdogan has blamed for engineering the coup. Gulen denies the charge.

Gulen "originally came over to America to do health checkups,” explains Amana Fontanella-Khan, a reporter for The Guardian, who visited Gulen at his compound over the weekend. She says that Gulen had diabetes and heart concerns.

Fontanella-Khan believes that the reason the reporters were granted access is that Gulen wanted to present himself as a simple, harmless man. “I think that he wanted to preempt any sort of questions among Americans saying ‘well who is this man and what is he doing exactly?’ I think he wanted to lay any fears or doubts to rest. […] He wanted to say this is not a place where any coup is being hatched,” she says.

Nonetheless, Erdogan's fears have, to some degree, been proven right. That may now cause him to push even harder to centralize his own power, Hamid notes. The manner in which the Friday coup waned, with Erdogan's dramatic return to the Istanbul airport to cheering crowds of supporters, could also feed a sense of himself as historic figure.

“That kind of vindication, it emboldens Erdogan, it contributes to a sense of self righteousness, and a desire to punish his opponent. That’s what we’re going to have to watch very closely,” Hamid says.

Part of what drives Erdogan, according to Hamid, is a sense of historical grievance, as Islamist parties like the AKP have a history of being banned and shut down, by the military or the judiciary.

“For seven decades, Islamists, as well as many others, have not been allowed to express themselves in public and political life when it comes to their religious beliefs. That’s a long-running grievance, and that’s what drives Erdogan’s very aggressive approach. It was done to him and now he is doing it to his opponents. “

However, Hamid believes that some American and Western commentators were wrong to see the coup as a potential positive. Some, like Charles Krauthammer of Fox News, even cheered it on. While the coup failed, Tukey’s secular/Islamist divide isn’t going anywhere anytime soon.

“That primary cleavage will be with us for a long time to come. It can’t be resolved or reconciled because it deals with [these] foundational issues. And that’s why I think the most important thing for Turkey is that, they can hate each other, but to agree to hate each other within the democratic process and without resorting to violence,” he says. “That’s why coups are so frightening, because they threaten to undo that very process of the peaceful resolution of disputes.”

The World's Shirin Jaafari contributed to this report.