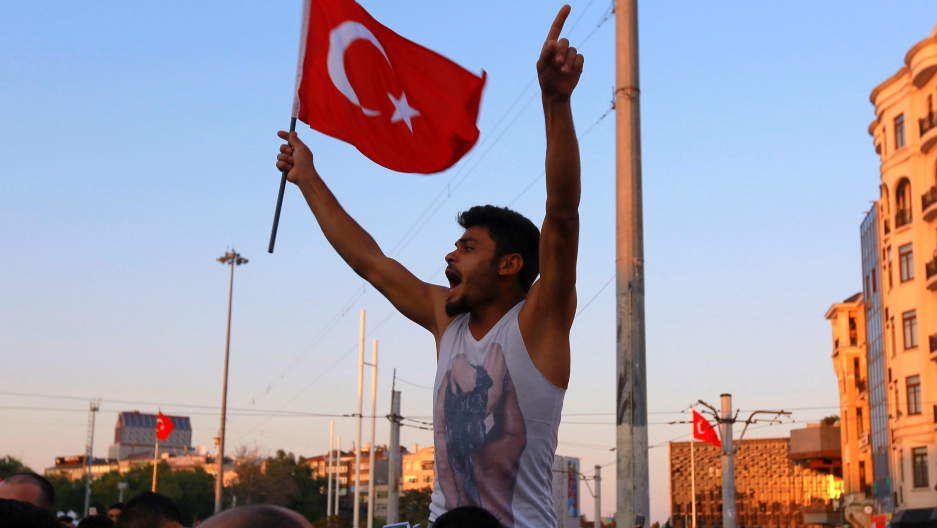 A man waves a Turkish flag at Taksim Square in Istanbul on July 16 after a coup attempt.
Credit:

On a Monday morning in Istanbul, Ismail Yildiz’s market is buzzing again.

The cooler is full of soda and beer. The shelves are fully stocked with mounds of candy bars and cases of water.

This isn’t what the shop looked like on Friday night when a group within the Turkish armed forces tried to overthrow the government.

“People rushed in and picked up whatever they needed: water, snacks. And of course, cigarettes and alcohol,” says Yildiz with a laugh. “They didn’t know what would happen the next day.”

The coup plotters closed down bridges in Istanbul and bombed the parliament in the capital Ankara, using tanks, helicopters and low-flying F-16s. President Recep Tayyip Erdogan finally appeared on national television via FaceTime, calling on citizens to take to the streets and protest the attempted overthrow.

Within hours, police and other forces had put down the coup. But in the meantime, people flocked to ATMs and local markets, like Yildiz’s shop, to stock up.

Read more: Turkey's crackdown: How far will it go?

Yildiz, who’s 49, says everyone was nervous, but he knew it would all blow over quickly. He lived through a coup in 1980.

“I know what a real attempt to overthrow the government looks like,” he says, “and this wasn’t it.” It was too disorganized and the whole military didn’t back it, he adds.

Like Erdogan, Yildiz blames the whole thing on the followers of Fethullah Gulen, a prominent Turkish cleric who has lived in self-imposed exile in Pennsylvania since the 1990s. Gulen has a vast network of followers inside Turkey, and though he and Erdogan were once allies, Gulen’s now enemy number one for the Turkish president.

Gulen denied accusations that he was involved and condemned the overthrow plot.

Still, Yildiz says he’s proud that regardless of their politics, people pulled together to stand against what he calls the hijacking of their government.

“No one wants a military government. We’re a democracy,” he says.

On Saturday there were a few lingering remnants of the night before. You could see tank tread marks on the bridge road. And government supporters blasted Ottoman anthems from their cars.

But it was already business as usual for Yildiz. Customers strolled over to chat about Friday’s happenings — the low-flying jets and their sonic booms; the angry mobs who attacked and in some cases killed soldiers who were surrendering.

It was scary for everyone, Yildiz says, and he’s glad his store is a safe place for people to talk about it. He tells me that now that the ordeal is over, he doesn’t think much will change in terms of daily life in Turkey.

“Look at us. We’re talking freely; you can ask me any questions you want,” he says, though he declines to tell me whether he is a supporter of Erdogan and his ruling Justice and Development Party.

One thing people are talking about: reinstating the death penalty, abolished in Turkey in 2004. The Turkish president says he will not rule out bringing it back.

If that happens, Yildiz says he would support it for extreme cases — like attempting to overthrow the government.