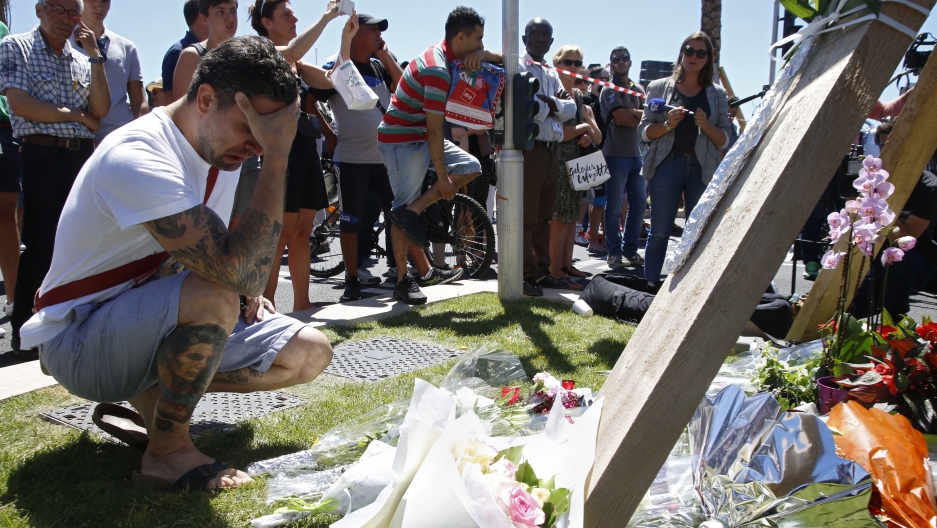 A man reacts near the scene where a truck ran into a crowd at high speed killing scores and injuring more who were celebrating the Bastille Day national holiday, in Nice, France on July 15, 2016. Many people are trying to understand what motivates this kind of "lone wolf" terrorism.

In the United States, many of the most brutal, high profile attacks have been ascribed to “lone wolves.” The perpetrators of the Boston Marathon bombing, the San Bernardino attack and the Orlando massacre were inspired by foreign terror groups but have no apparent formal affiliation with them.

And so far, officials have attributed last week’s attack in Nice, France, to a lone attacker too, a 31-year-old Tunisian native named Mohamed Lahouaiej Bouhlel. (Lone wolves also have been blamed for the fatal shootings of law enforcement officers in Dallas on July 7 and in Baton Rouge on Sunday.)

If such attackers are the faces of terrorism, how can we stop them?

Clark McCauley is a social psychologist and co-director of the Solomon Asch Center for Study of Ethnopolitical Conflict at Bryn Mawr College. After an extensive study of terrorism case histories, McCauley reached a surprising conclusion, one that he admits may be difficult to understand: some lone wolf terrorists are motivated not by hate, but by love.

Included below are excerpts from an interview with McCauley about what motivates terrorists and how the country should respond. Here are some of his remarks, which have been edited for conciseness and clarity.

All of us have our opinions and our actions formed by the groups we belong to. Most of us belong to lots of groups. We have family, friends, coworkers, people in our religious group. But when your whole social world contracts down to just one particular group, an underground cell of some kind, then the power of that group to set norms and determine morality is unlimited.

You get to see that same kind of horsepower with small groups in combat. It is interesting to go through Medal of Honor winners. Some of those people survived doing something like throwing themselves on top of a grenade. When you ask those people, ‘Why did you do it? What were you thinking?’ they answer, ‘Well, I wasn’t thinking. I did it immediately and automatically because I could help, and I had to help because these are my friends.’

There is at least one profile of lone wolf terrorists. These are people who tend to be loners, or they’ve recently lost their social connections. Frequently chronic loners, they have some history of mental disorder, especially depression. They have a grievance. And what that amounts to is if you’re suffering from some grievance, as you see it, and if you’re suffering from some kind of psychopathology, you don’t have very much to lose in acting on your grievance.

But not everybody who is a lone actor terrorist fits this disconnected-disorder profile. The other profile that we have suggested is a caring-compelled profile. There are examples of lone actor terrorist who have no history of mental disorder, who have good social connections, family, friends, work, but who seem to be capable of more intense sympathy and empathy than most of us. And they feel so strongly, their emotional reaction to the suffering of others as they see it, that they just feel like that they have got to do something.

Now, this is a little hard for most people to get hold of, I admit, because it amounts to saying that there’s a potential dark side to qualities that we usually think of as quintessentially human and humane. We’re suggesting there are some people who feel so strongly, they have to do something. Anything that isn’t action is hypocrisy.

Also: 'They look at our children as monsters, and they're not,' argues mom of ISIS fighter

Why doesn’t this empathy extend to their victims?

They’re focused on the victims that they care about. I mean, you could say that something similar goes on in the US when we have reported collateral damage that’s done by US attacks in Muslim countries. Why is it that we aren’t more concerned about the innocent Muslims dying? Why are we more concerned about US casualties in the course of fighting in these places? It has to do with who you care most about. It has to do with who you love.

The great majority of us are susceptible to it because it’s not hate that’s at the bottom of intergroup violence. It’s love. It’s love for the in-group. Every one of us who really loves is capable of anger and outrage when the people they love are being victimized, harmed, unjustly hurt. It’s, I would say, almost the default in human affairs.

In general, the ideology comes later. It comes in more as justification and rationale for the violence than as a cause of violence. Human beings, and these are normal human beings, don’t kill other normal human beings without having some story to tell to themselves and to others as to why they’re doing it.

One of the great tactics of terrorists is to seek an overreaction. They want an outrageous attack that will produce anger and outrage, which will target a whole, immense group. We have trouble seeing the danger of overreacting because most definitions of terrorism say that the motivation is to terrorize. It makes it hard for us to see that the main reaction that people have to a terrorist is not fear. It’s anger.

Terrorism arises out of a long back and forth between one group and another group. A whole series of actions and reactions with escalation over time. Terrorism is not something that’s out there. It’s not like we can just go study the terrorists and find them and fix them and finish them. It’s a dynamic interaction of conflict over time, and that’s what we have to understand.

I’m hoping that one day we’ll have as many, and as careful and useful and detailed databases of government responses to terrorism as we have databases of terrorist attacks. When we have something like that kind of balance, then we’ll know we’re on track to understanding the problem as a relationship problem.