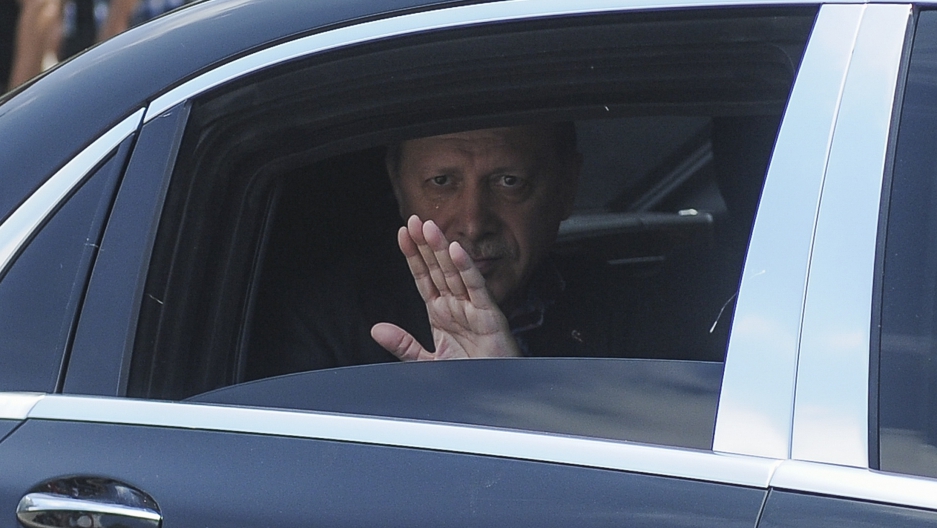 Turkish President Recep Tayyip Erdogan waves from his car after leaving his residence in Istanbul to attend a funeral service for the victims of a thwarted coup at Fatih mosque in Istanbul on Sunday.

Turkey's president vowed Sunday to purge the "virus" within state bodies after a failed attempt to end his 13-year rule. Some 6,000 people already have been detained.

"We will continue to clean the virus from all state bodies because this virus has spread. Unfortunately like a cancer, this virus has enveloped the state," Recep Tayyip Erdogan warned thousands of mourners at a funeral for victims killed during the coup attempt.

World leaders, including President Barack Obama, have strongly condemned the attempted coup but also urged Turkey to respect the rule of law in its aftermath, especially after pictures emerged showing the rough treatment of some coup plotters when arrested.

Justice Minister Bekir Bozdag said on Sunday that around 6,000 people had been detained and the number would rise. "The clean-up operations are continuing," he was quoted as saying by the state-run Anadolu news agency.

According to the government, 161 civilians and regular troops lost their lives when a group within the army sought to overthrow the authorities by seizing key strategic points in Istanbul and Ankara late Friday.

Over 100 coup plotters were also killed, the military has said.

The botched coup bid was the biggest challenge to Erdogan's rule as prime minister and now president. But he successfully mobilized supporters into the streets to face down the plotters.

Thousands responded late Saturday to a new call by the president to pour into the squares to celebrate the "victory of democracy" with mass rallies of flag-waving Turks reported in cities, including Ankara, Istanbul and Izmir.

Europe Minister Omer Celik urged people to stay on the streets, writing on Twitter that the "vigil for democracy" continues.

The Turkish authorities have made clear they will show no mercy in the wake of the coup, accusing the plotters of acting on behalf of Erdogan's arch enemy, the US-based preacher Fethullah Gulen.

Turkish television has shown images of captured suspects forced to lie face down on the tarmac after their arrest while AFP photographers have seen suspects roughly led away pursued by angry mobs.

NTV television said 34 generals of various grades had been detained so far. They include senior figures like Erdal Ozturk, commander of the third army and the commander of the Malatya-based second army, Adem Huduti.

In an operation early Sunday, authorities detained the commander of the garrison in the western town of Denizli, Ozhan Ozbakir, along with 51 other soldiers.

Turkey also detained a senior air force general and other officers accused of backing the failed coup at a key air base used by US forces for raids in Syria.

Brigadier air force general Bekir Ercan Van was detained along with over a dozen lower ranking officers on Saturday at the Incirlik air force base in southern Turkey.

Former chief of staff Ilker Basbug told Dogan news agency that Turkey should make a distinction between the coup planners and young soldiers "of 20 years old who may have been mistaken".

The crackdown is however not restricted to the military and Anadolu said prosecutors have issued arrest warrants for a total of 2,745 judges and prosecutors across Turkey.

The entire investigation is being led by Ankara prosecutors and those arrested are suspected of belonging to Gulen's group, which Turkey calls a terror organization. Gulen's supporters say their group is entirely peaceful.

Obama has warned Turkey there is a "vital need" for all parties to "act within the rule of law" in the aftermath of the coup.

However there was no such concern from Russian President Vladimir Putin, who called Erdogan to wish for a "speedy restoration of strong constitutional order."

Erdogan and Putin, who were feuding over the shootdown of a Russian jet, will meet in the first week of August, Anadolu said.

Friday's putsch bid began with rebel F-16 jets screaming low over rooftops in Ankara, soldiers and tanks taking to the streets. Rebel troops also moved to block the two bridges across the Bosphorus Strait in Istanbul.

Turks have not seen such scenes since 1980, when the military led by general Kenan Evren ousted the government, and many had no desire to revive these memories.

Erdogan has pinned the blame on Gulen, an erstwhile ally he accuses of running a "parallel state," and called on Obama to extradite the reclusive preacher to face justice.

"Mr President, I told you myself, either deport or hand over to us this person who lives in 400 acres of land in Pennsylvania," he told a triumphant rally in Istanbul late Saturday, carefully not referring to Gulen by name.

In an interview with Haberturk television, Labor Minister Suleyman Soylu went even further, saying: "The United States is behind the coup" and adding it had now to handover Gulen.

But Gulen has categorically denied any involvement in the plot and suggested it could have been staged by Erdogan himself. Secretary of State John Kerry called such claims about US support for a coup "utterly false."

Meanwhile, Turkey has demanded the extradition of eight people thought to have been involved in the coup who landed in a Black Hawk military helicopter in Greece.

The suspects are still in Greece, but the chopper itself is now been flown back to Turkey, a Turkish official said.

Istanbul authorities have sought to get life back to normal, but Washington on Saturday warned citizens against travel to the country due to uncertainty after the coup bid.