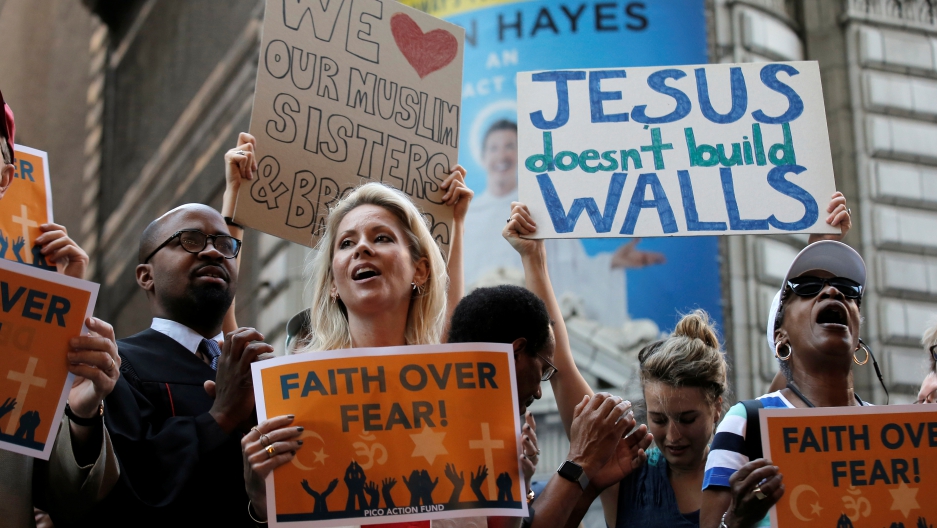 A group of interfaith religious leaders protest against Republican US presidential candidate Donald Trump outside a hotel where he was to meet with evangelical leaders in New York City, on June 21, 2016.

He told the Christian Broadcasting Network in 2010, "For me it all begins with faith; it begins with what matters most, and I try and put what I believe to be moral truth first, my philosophy of government second, and my politics third.”

Pence’s outspoken Christianity could curry favor for Trump among Evangelicals, an important group of voters for the campaign.

Michael Gerson, though, says that an endorsement of Trump is a sign that the Evangelical movement has lost its way. The syndicated columnist was a top aide and chief speechwriter for President George W. Bush.

“In the Book of Revelation, the Mark of the Beast shows who owns you,” he says. “The Mark of Trump is not the same thing, but it shows who owns Evangelicals, and I think it’s a very bad sign, given his views and values.”

Here are more remarks from Gerson, edited for brevity and clarity. 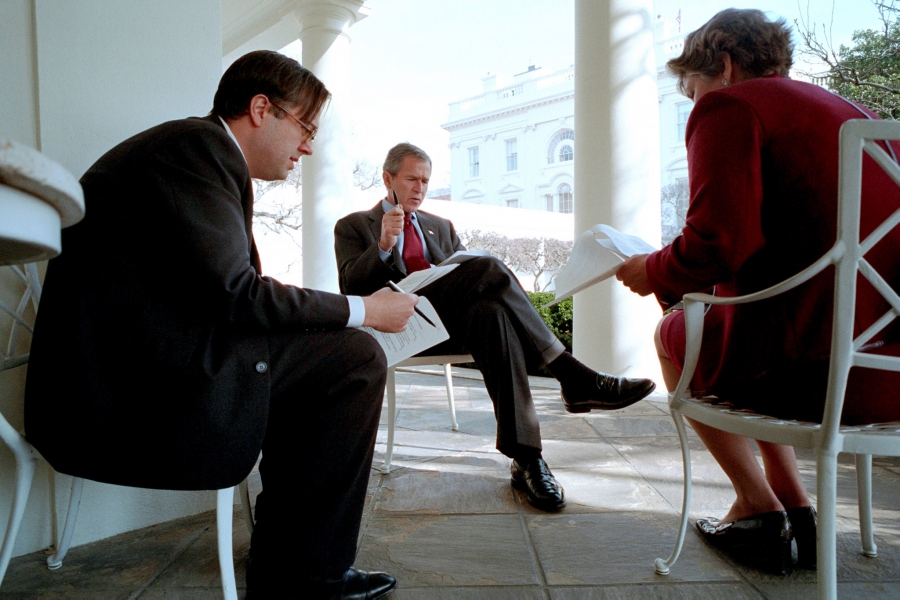 Michael Gerson (left) prepares a State of the Union speech with then-US President George W. Bush and Karen Hughes, Counselor to the President, in 2002. Gerson was Bush's chief and he is one of the country’s leading Evangelical thinkers.

I think that Evangelicals have been asked to make a deal. Trump knows he doesn’t come from their background, but he’s offering more favorable Supreme Court justices and to protect religious liberty. But I think Evangelicals lose something in the process.

I think Evangelicals are showing a long-term temptation to be taken in by proximity to power. This is a problem of not just Evangelicals, by the way, but of all religious people. You get them close to power and they can’t see what’s before them anymore. It somehow changes them.

When Evangelicalism becomes just one more special interest group in American politics, it has lost its defining mission. Its defining mission is not to serve itself. It’s actually to serve the vulnerable and weak and the poor. That is the centerpiece of Evangelical and Christian social ethics. And that needs to be part of whatever Evangelicals do in politics.

On immigration and Islam

I think Christian faith removes the option of dehumanizing immigrants, making them seem like the other, making them seem like a threat. That is not an option, from the perspective of Christian social engagement, and that’s what you’re seeing on the part of a lot of Christians. It’s deeply disturbing, deeply hypocritical, to essentially have a politics based on us and them. That is not consistent with a Christian view on what politics should be.

I’ve urged Evangelicals to have more feelings of similarity to people like Muslims in our society, where Muslims are sometimes viewed by their neighbors as fundamentally illiberal, and by their community as a threat, unfairly. And some people view Evangelicals in that same way, so it’s deeply hypocritical when Evangelicals demand their religious liberty and then seek to deny it to Muslims.

Put humans beings at the center of politics

There are certainly risks to bringing religious ideals into the public square. But religion has also inspired some of the best things about American life. It inspired the abolitionists in American politics to seek laws which honored universal human rights and dignity. It inspired the Civil Rights movement in America, which was organized in the church, the one institution that was not infected and held by the broader culture. The church played that role in civil rights in ways that have dramatically transformed American life.

So I think there are risks to Christian political engagement, but Christians have also brought their views of human beings, their rights and their dignity. That's also a religious commitment that puts human beings at the center of politics. That is the contribution of religion in public life, and without it, our history would have been much less just, much more oppressive.

You can’t dehumanize your opponent. Otherwise, you get deep, deep divisions, not just disagreement, in a society. And that is dangerous. We need to be united as a society to confront certain needs, and we need to show some kind of compassion and humility in our public engagement or our systems don’t work.

Compassionate conservatism means taking an issue like the performance of inner city schools, and trying to apply the best conservative and free market ideas to meet real human needs in our society. To take what I think are the right policies and approaches, but apply them in the cause of social justice. You see some of this in Paul Ryan today, trying to talk about issues of poverty and inequality in our common life. But it has really been overwhelmed by the Trump phenomenon that goes in exactly the opposite direction.