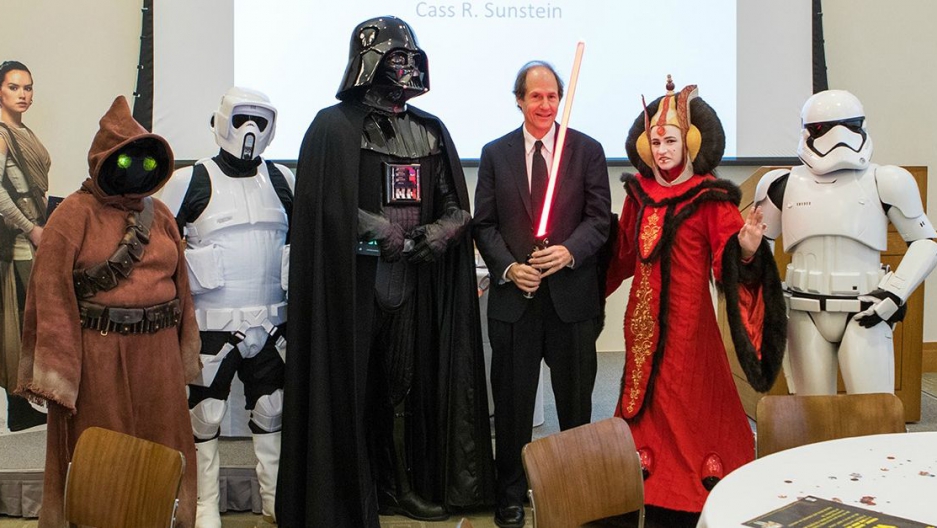 Cass Sunstein is one of America's preeminent legal scholars and public policy thinkers, has worked as an adviser to President Barack Obama and has appeared on lists of potential candidates for the Supreme Court. He’s also, as it turns out, a pretty big Star Wars fan.

“I liked ‘Star Wars.’ I liked ‘A New Hope’ plenty. I liked ‘The Empire Strikes Back’ even better. And I liked ‘The Return of the Jedi,’” Sunstein says. “But my becoming a Star Wars-focused person is extremely recent and was prompted by my now 7-year-old son who, improbably at the age of 5, became very focused on ‘Star Wars.’ And that got me very curious about the whole phenomenon.”

Sunstein has written a book called "The World According to Star Wars,” that explores social, legal and political philosophy, taking illustrations and parallels from the popular space series.

“There is a connection between ‘Star Wars’ and law,” Sunstein says. “And that’s the first thing that drew me in. ‘I am your father’ is a way of making everyone go ‘whoa,’ because what they thought before is completely in a new light. That’s both shocking and also can produce a sense of immediate recognition: ‘That’s it. That’s right.’ And law’s like that, too. When the Supreme Court struck down racial segregation in 1954? That was an ‘I am your father’ moment of the best kind."

“Jedi knights have a talent not just to move objects but also to affect minds and the way they can do that is manipulate people's attention,” Sunstein says. “What some of the behavioral economics has shown is that our attention is a very limited commodity and sometimes we won't see things that are even in front of our eyes. And that applies to not just magic stuff but to behavioral efforts by, let's say, self-interested companies to manipulate us. ... And governments, when they're working well, I think often are trying to expand people's attention so that they see aspects of a transaction that really matter to their lives.”

Sunstein also likes to analyze the way the Republic in the Star Wars movies turned into a fascist empire, and he likes to compare this fictional narrative to modern political events.

“We live in a time when strong men are having appeal in both Europe and the United States,” Sunstein says. “Mr. Trump, some of his appeal is, he’s gonna knock some heads. The niceties don’t matter to him. The idea that we have a broken, paralyzed legislative process and we need someone who can set things right.

"And in Europe we’re seeing that as well. I think Lucas did get that dynamic right. And it’s not a coincidence or a prophecy on his part. He studied history, particularly Nazi Germany and Napoleon’s France, and saw how a broken or blocked legislature can often breed a real challenge — a serious challenge — to democratic forms.”

Other parallels between Star Wars and our modern political universe? Sunstein says our discussions about the constitution are pretty similar to the way Star Wars fans debate the series.

“When we talk about whether the Constitution protects the right to same-sex marriage, now the right to polygamy, whether it protects against surveillance or whether to interpret it that way is foolish and ridiculous,” Sunstein says, “That's like the Star Wars fans debates over, you know, did Han shoot first? Are the movies actually secretly on the side of Emperor Palpatine? Those are all kind of like our constitutional debates.”