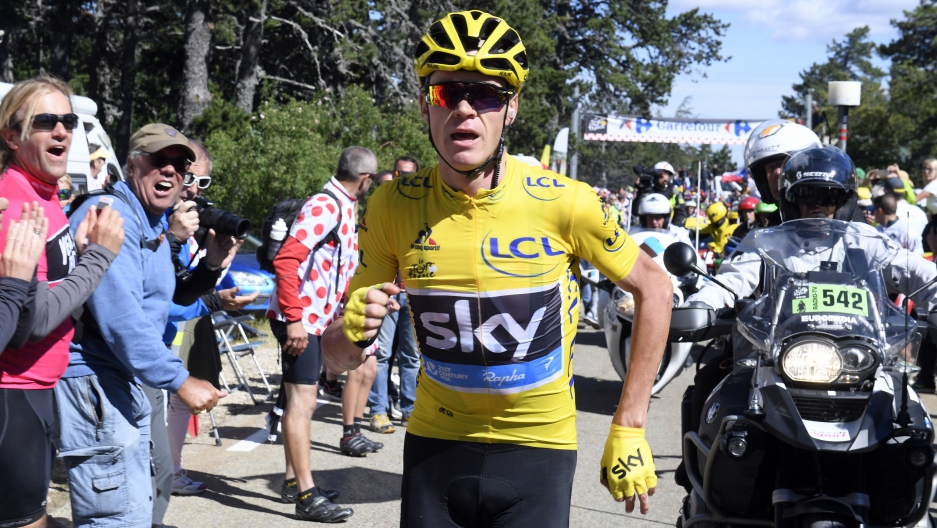 Chris Froome rode to multiple victories in the Tour de France like a metronome. Steady. Certain. Robotic. He keeps his head down and pumps his legs. A team of superstar teammates surrounds him. His coaches and tacticians relay him information. A cycling computer affixed to his handlebars relays him stats. He attacks on one of the opening climbs, gets a lead and protects it the rest of the way.

It's a hyper-effective strategy. Clinical. And it's boring as hell to watch.

Froome is a buzz kill at the Tour.

This year, it's different.

"It's hasn't been the walkaway for Chris Froome that everybody expected and and frankly, feared because that's a bit dull," says the New York Times Cycling Correspondent Ian Austin. "He's not been as superhuman as he has been in the past."

This is a good thing. Froome has transformed into a daredevil, a spontaneous attacker, and even, a runner.

Froome's daredevil turn started at the top of the opening climb in the Pyrenees. He surprised his competitors, announcers, and fans by doing the unthinkable: attacking on a descent. He launched it while his main competitor, Colombia's Nairo Quintana, took a water break. He started bombing down a hill. He got into what's known as an aerotuck, leaning his head over his handlebars and placing his body over his frame. It's nothing new. But then he did something crazy. He started pedaling furiously while still in the aerotuck. It looked awkward. Uncomfortable. But it helped him go fast.

He won the day and even got a time bonus for his efforts. And #frooming was born.

Oh, and he also punched a guy:

A slap on the wrist for a punch in the face: @ChrisFroome fined for yesterday's punch. Should he have been? https://t.co/cbVqmTkO9W

But if anyone knew then what was to come… we'd think it was a lie.

Froome had more moves. On the 11th stage, he launch a spontaneous attack, riding away with three other riders, including the current world champion Peter Sagan. These are stages where guys like Froome usually conserve and take care. It's a day for the sprinters, men who don't pose a threat to his overall lead. But he went out an attacked anyway. It was a success. And while it only gave him a handful of seconds, it messed with competitors. The predictable was now unpredictable.

Then came the theatre of the absurd atop Mt. Ventoux. It's a brutal climb. Mt. Ventoux is a cruel rock, showing no empty to the most benevolent of cyclists. Organizers even had to change the finish line because winds were blowing over cars and caravans at the top. So they ended the race 6 kilometers from the top. Crowds flocked to this area of the course, permitting only a sliver of space for the cyclists to ride. That's when, and where, it happened. A motorbike filming the race suddenly stopped. Froome and several other riders crashed into it.

This doesn't happen. Not in a grand tour. Former racers say that Froome's animal brain took over. That's why he ran. "And it's not an easy thing as anyone who has put on cycling shoes can attest to," say Austen. "He actually maintained a staggeringly good pace." While technically illegal, organizers gave Froome a break. On paper, he had lost the Tour. But the race jury said it was an exceptional circumstance. They did not penalize him or give him the time he got after he eventually crossed the finish line.

Froome increased his lead on Friday's individual time trial stage. He also spoke about the importance of continuing to ride as an act of defiance, following the attacks in Nice. "This is definitely a time for people to stand together," he says.

The French who never seem to like Froome (he's often called "Froome-strong" a play on Lance Armstrong and insinuating he's a cheater) are now starting to cheer for him. At least, cheer for him more than they have in the past. You can hear and see the encouragement when you watch the races pass through towns and countrysides.

He's finally racing with panache, and in doing so, giving us iconic moments and memories.

It's going to be a long time before this image leaves the collective consciousness of the cycling world. Maybe never. #signsandwonders or #signsandrunners #artisticmasterpiece