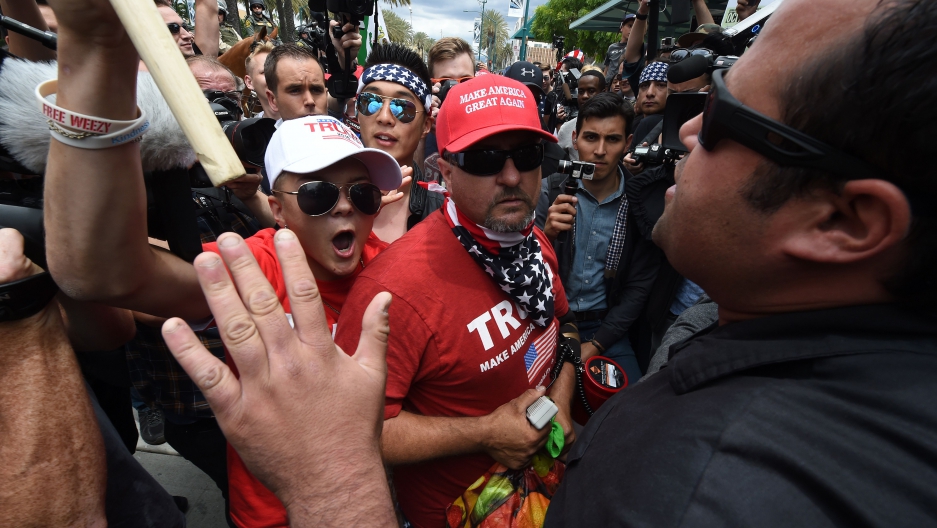 Anti-Trump protesters (R) clash with Donald Trump supporters (L) outside the Anaheim Convention Center during a rally for Republican presidential candidate Donald Trump on May 25, 2016 in Anaheim, California.

At 7:30 in the morning, reporters gather around a dark van parked in Dupont Circle, some holding to-go coffee cups and wearing the calm expression of a person who doesn't know what they're in for.

Shane Bell, a former elite commando of the Australian Armed Forces, is driving the group of about 10 from Washington, DC to a Maryland warehouse roughly an hour away. There, Bell will teach the trainees how to bandage a gunshot wound with T-shirt scraps.

His colleague Paul Burton, a former sergeant major in the British Army, will then instruct them to avoid touching their skin and to step into the shower fully clothed if they're hit with tear gas.

And Frank Smyth, a longtime conflict reporter and the founder of this training program, will explain the rights journalists have when police make arrests during violent protests.

For years, media and NGO workers have come to Smyth's Global Journalist Security to practice staying safe in war zones. The group's five-day courses cover things like "risk reduction in terrorist and targeted environments," and overall survival in a variety of life-threatening situations.

But these journalists — reporters, a photographer, a videographer, and this audio producer — are taking the course to prepare for the Republican and Democratic national conventions, happening this month in Cleveland and Philadelphia.

They're part of a recent trend of journalists seeking out hostile environment training to cover US politics. Smyth says he was getting so many inquiries from media outlets earlier this year, in fact, that GJS tailored some of its curriculum just for the conventions.

Smyth says GJS has trained "hundreds of journalists" whose editors thought it prudent to prepare for the political conventions in this way — The World's editors among them. And some are also preparing with protective gear: military-grade bulletproof vests, respirators, and helmets.

For some newsrooms, this is normal. Large outlets like the Associated Press and the BBC have correspondents move in and out of conflict zones and are prepared to cover civil unrest. But this group is mostly politics reporters, more likely to spend their days on Capitol Hill or at their local statehouse.

Terrell Jermaine Starr is used to covering protests and political rallies as a national political correspondent for Fusion. But as he heads to the RNC in Cleveland, Starr says he's alert to the possibility of violent protests, and aware of the risks he might face as a black man.

After a day of lessons in first aid and de-escalating confrontations, the trainers bring in actors to perform four scenarios.

During the simulation of a mass arrest in the middle of a protest, every journalist trainee is pushed against a wall and handcuffed. The actors playing riot police officers scream expletives and hit some of us with soft bats. Anyone who tries to talk or look away from the wall is ordered to stop.

Starr, the only black trainee at the course, is wearing a backpack that holds his camera equipment. The police actors taunt him — ask him if it's his own camera, if he'd miss losing it. After a while they move us out to another room, and one of the police actors calls him a racial slur.

Later, when the day's training is over, Starr says the arrest scenario got to him.

"I completely shut down because when the cops say 'Put your hands up,' you drop everything, put your hands up," he says. "I didn't even tell the actors that I was press. I just got scared and I was thinking about survival because I knew that if I made the wrong move, if I reached for something, I'm dead, and the fact that I'm a reporter didn't mean anything." 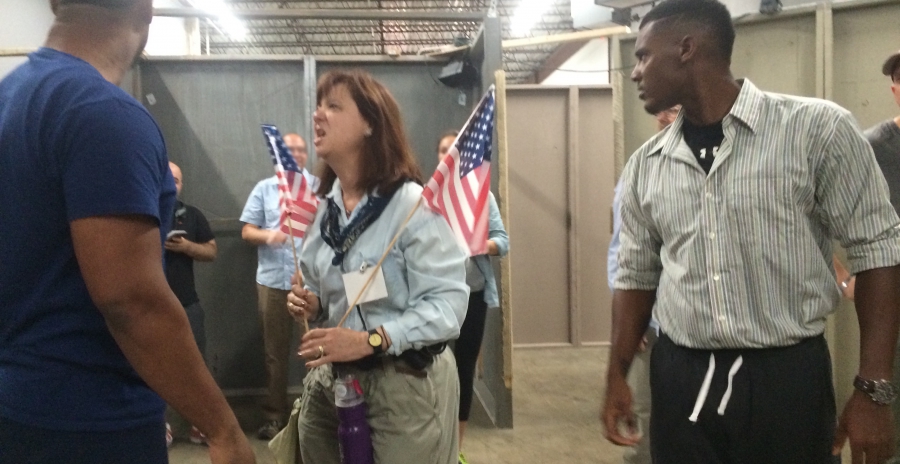 Actors simulate a Donald Trump rally during which supporters become aggressive toward reporters.

The timing of the course made those fears feel even more real.

Two days before it began, police in Baton Rouge, Louisiana shot and killed Alton Sterling, a black man. The next day police in St. Paul, Minnesota shot and killed Philando Castile, also a black man. And after the first day of the GJS course, a man named Micah Johnson killed five Dallas police officers with a semi-automatic rifle during a Black Lives Matter protest.

Johnson, whom police then killed with a remote-controlled robot carrying explosives, was also black.

On the second day of training, the roomful of journalists dropped to the warehouse floor during an active shooter simulation, trying to discern which direction gunfire was coming from. Afterward, one correspondent called the simulation "unnerving."

But it's his job to lay out the elements for a worst-case scenario. Given the types of firearms that are common on US streets and in the hands of law enforcement, Smyth recommends all journalists at the conventions consider wearing military-grade body armor.

"The fact that we're even having this conversation is incredibly odd and ironic and quite disturbing," Smyth says.

"If [military-grade] weapons are in play, then you need military-grade body armor. We've seen these weapons used in a number of mass shootings, and now for the first time in the United States, at least that I can recall, we're seeing these semi-automatic, high-velocity rifles being used in protest situations ... and that's certainly not something we're happy about." 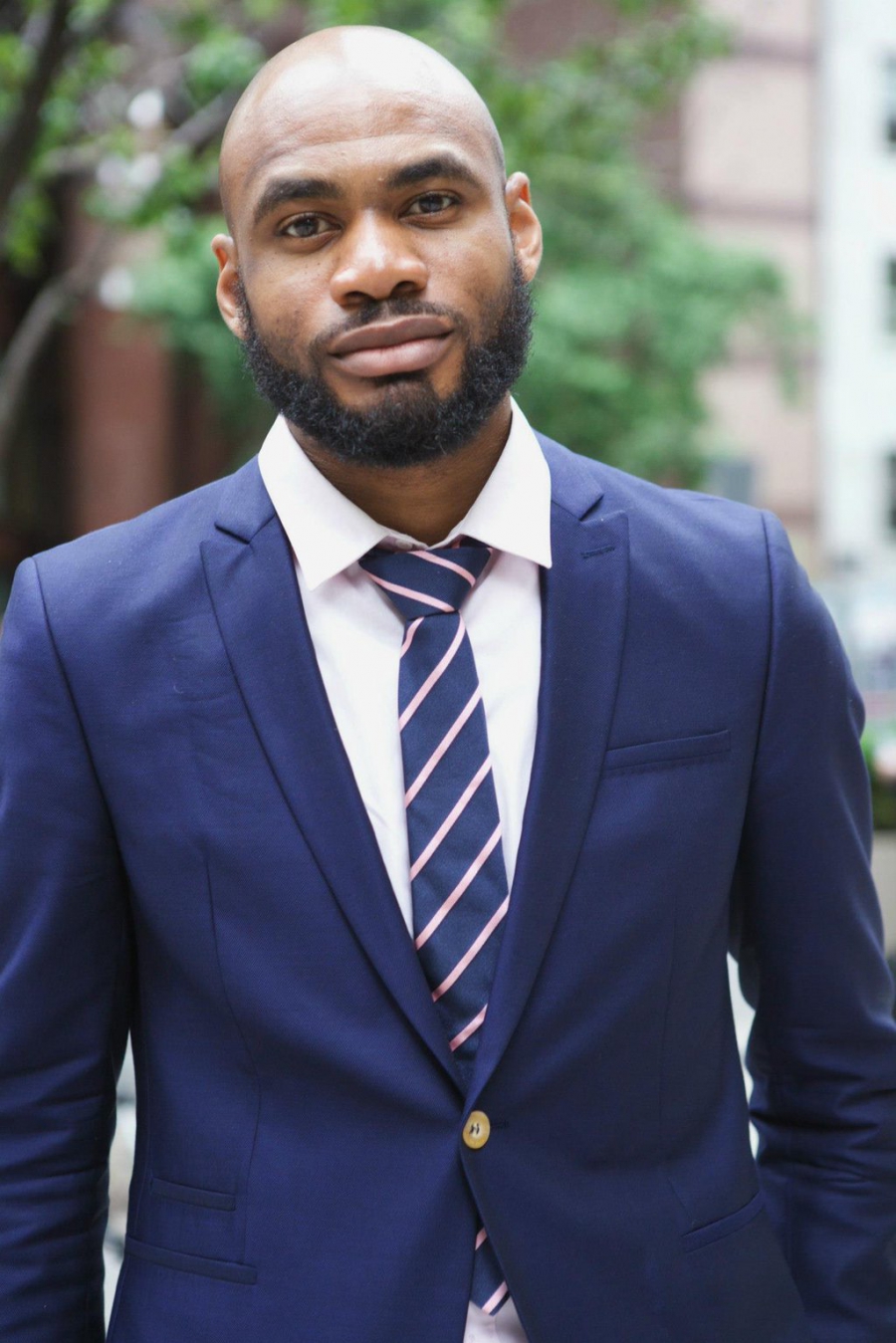 Starr, who's based in New York, has been reporting in Cleveland ahead of the RNC, making contacts and getting the lay of the land. He's aware there has been violence at Donald Trump rallies, including against black people and media targeted by supporters of the presumptive Republican presidential nominee. Starr says he's used to covering rallies, but has never experienced a violent political event.

His assignment in Cleveland is to cover Black Lives Matter protests, and he says his main concern is to make sure police and others know he's not a protester.

"But if people see me as a reporter, then I would hope that they would be less likely to attack me because they know that they will be on the news and get a lot of unwanted attention. You have to use whatever means you can as a black person to protect yourself, and me identifying myself as a journalist, I hope that that will be that lifesaver."

The AP reported this week that at least one group has canceled its demonstration at the RNC following the Dallas shootings. The same story quoted Trump saying he expects more violence at campaign events this summer.

"After these two recent shootings of two black men [last] week and ... five officers were shot and killed by a black man in Dallas," Starr says, "when I'm going to the RNC, I know I'm there to report, but it's very difficult to not think of myself as a black man first. Because at the end of the day people don't see my credentials, they don't see my achievements, they see somebody who they may think is aggressive, they may see somebody who may be a threat."