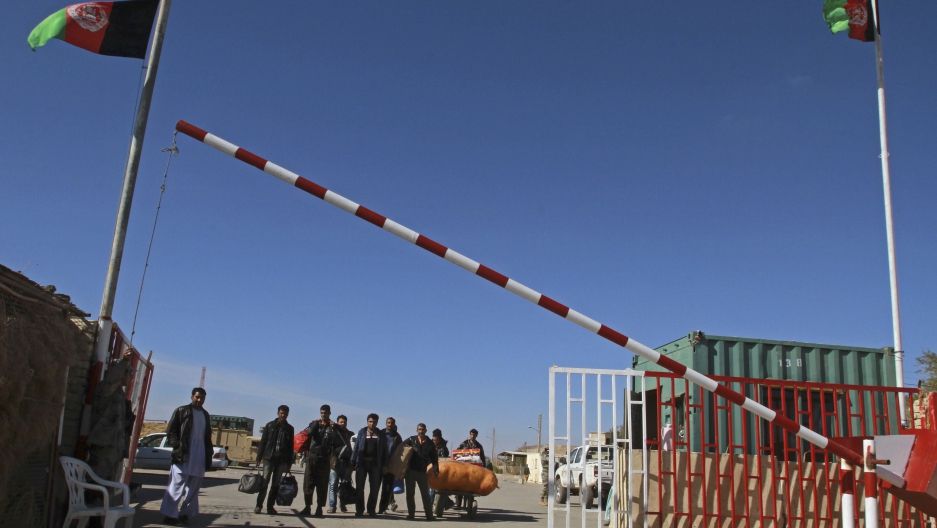 A group of Afghan migrant workers enter Afghan territory after leaving Iran at the Islam Qala border in Herat province, Nov. 5, 2012. Afghanistan's oil-rich western neighbor has for years been a destination for Afghans seeking work or fleeing war.

Hassan gazes at the sea and sighs. The rippling waves lull his anxious mind. For two hours a day after his factory job, Hassan sits on the edge of the Bosphorus trying to forget what he witnessed in Syria.

Before the 23-year-old became a soldier in a proxy war, and then a refugee in Turkey, he was a construction worker making ends meet in Iran. Born and raised in Tehran, Hassan didn’t have the right to attend school there, own property or travel without special permission from the Iranian government — all because his parents were Afghan refugees.

But a year ago, he heard that Iran’s elite paramilitary Revolutionary Guards offered benefits — Iranian citizenship and up to $900 a month — to Afghans who signed up to fight for Bashar al Assad’s regime. So he enrolled. After 20 days of military training in Iran, Hassan’s group was flown to Jableh, Syria.

“The first time you go into battle, you’re so scared that there’s no limit. But after the first battle, you adjust,” Hassan said. “They talk so much about crimes that ISIS commits that you begin to believe your only goal should be killing ISIS.”

Iran is recruiting thousands of Afghan refugees living in Iran and inside Afghanistan to join the Syrian regime, an Iranian ally, in war. In exchange, the Iranian government promises legal status and cash to the refugees’ families. Roughly 3 million Afghan refugees live in Iran currently; most are undocumented.

Shiites like Hassan become part of brigades, like the Fatemiyoun, a battalion trained by the Revolutionary Guards to protect the holy Sayyida Zainab shrine near Damascus. But they are also battling opposition groups and ISIS on the front lines.

More Afghan men are joining the war in Syria, Afghan and Turkish officials say, and not all of them on the regime’s side. Some Sunni Afghans have volunteered individually to fight with ISIS in Syria. A Turkish border agent in Kilis said he has stopped several Afghans from crossing to Syria just this year to join ISIS. “When we see Afghans coming here, we immediately suspect they are crossing over to join the war,” said the agent, who spoke on the condition of anonymity.

Haitham Maleh, a Syrian opposition leader, wrote Afghan President Ashraf Ghani a letter in late June requesting a stop to the flow of Afghan fighters. He claimed 8,000 were with the regime, some of whom were allegedly committing atrocities against Syrians. The Afghan government responded that it’s tackling the issue through diplomacy with Iran.

Rights groups say Iran uses threats to force undocumented Afghan refugees to join the brigade. In a January report, Human Rights Watch quoted Afghans saying they were told they would be deported or jailed if they didn’t agree to fight in Syria.

Iran has denied using coercion tactics but admits that Afghans are protecting Shiite shrines in Syria, which are attacked frequently.

Hassan said most of the Afghans with him had signed up out of desperation for legal status and money. Some of them had come directly from Afghanistan, where Iran has recruitment centers to lure fighters, but most hadn’t set foot in their parents’ homeland.

Hassan said Iran brainwashed them with promises of martyrdom in heaven for defending shrines. The guards also vowed to give them military cards that would enable them to own property in Iran. But few, if any, received the card after serving in Syria, he said.

Other refugees report that they have received legal status after completing their tour of duty. Recently, Iran enacted a law that allows families of Afghan “martyrs” in the Syrian war to become Iranian citizens.

Hassan fled his tour of duty seven months ago and moved to Istanbul. He registered as a refugee with the United Nations and wants asylum in the West. 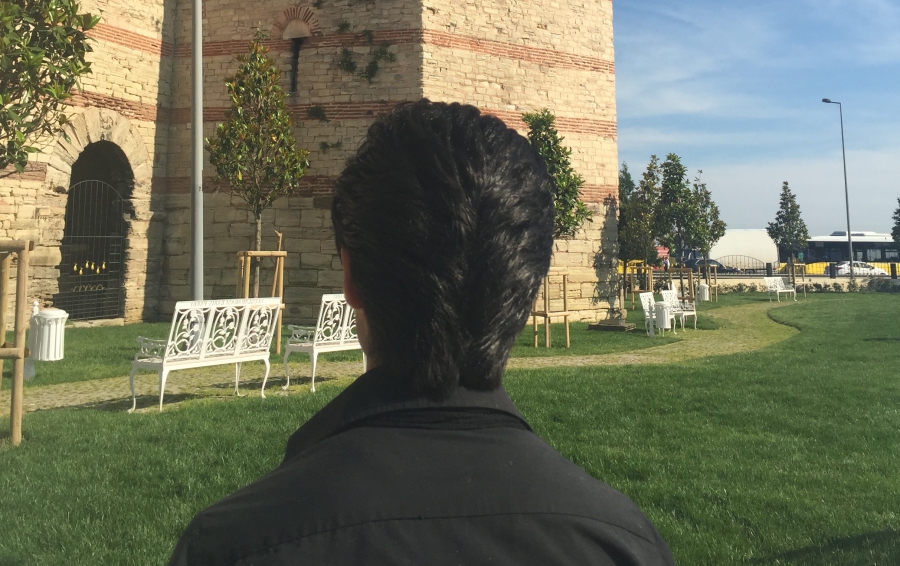 The wrinkles on his forehead belie his youth.

Hassan said he saw a fellow recruit shot down by Iranian commanders for refusing to fight. Many of the Afghan fighters are poorly trained and carry just an AK-47, while those shooting at them had machine guns. Many were killed in battle, Hassan said.

“My most painful memories were the killing of my comrades. They would fall in front of me and I could see their brains blown out by ISIS bullets. It was very painful for me, very painful.”

When asked if he killed anyone, Hassan stuttered. His hands shook.

“We had the job of clearing out the buildings in Aleppo. We would go inside the buildings, we confronted ISIS there and we had to hit. Otherwise, they would shoot us. And if they capture you, they behead you. I knew several boys from our base; they beheaded them and threw the heads back at us to see.”

Hassan said when his brigade captured some ISIS members, he was shocked to see that some were Afghans like him, fighting in a war that had nothing to do with them.

After four months in Syria, Hassan had a break for a month. Back in Iran, some members of his brigade held a secret meeting to debate whether they should finish their tour of duty. If they didn’t return, Iran could arrest or deport them.

“One friend said that he believed that we’re just pawns of the Revolutionary Guards. We’re nothing else. We will not count as martyrs. In the name of the shrine, they’re sending us to war and we’re too naïve to understand the truth. He convinced me that the guards are using us,” he said.

Hassan didn’t go back. Two of his brothers had escaped to Germany via Turkey and Greece. They urged him to follow. He took some of the money he’d made from fighting and hired a smuggler to get him to Turkey.

He said the smuggler threw him into the trunk of a car. It was hard to breathe — he held his nose against a hole in the trunk to get air. Then he walked with other families for nearly nine hours to reach Turkey.

“There were kids and women with us who couldn’t keep up and were crying. We carried their backpacks and carried their kids. Those who sprained their arms and legs, the smugglers would carry them. The rocks were difficult to pass through,” Hassan said. “The smugglers say it’s an easy journey just to get your money.”

By the time Hassan made it to Turkey, the European Union was finalizing a deal with the country to return refugees. The route to Greece was shutting down.

So he applied for asylum with the United Nations in Ankara. In order to remain a legal refugee, he had to stay in the remote Turkish town the UN had assigned him. But Hassan couldn’t find work there, so he moved to Istanbul. He has a job here, but still no legal status.

He lives in a room with eight other Afghan men. He said half of them are refugee smugglers. He pays them about $100 a month in rent, but mostly tries to stay out of their way.

Hassan feels he has no future here.

“I want to go somewhere where I can be a useful person, get an education. I’ve seen many hardships.”

His brothers live in refugee camps in Germany. They’re enrolled in German language classes, happy to have access to education.

But with more than 100,000 Afghan asylum seekers in Turkey, Hassan will be waiting to join them for years to come.