A fierce battle for a stretch of road could decide the fate of thousands of rebel fighters and hundreds of thousands of civilians in Aleppo, as well as the prospects for a negotiated end to the war.

Beginning in late June, Syrian government forces — backed by Russian airstrikes — tried to cut off the only road out of the eastern half of the city, which has been held by rebel groups since July 2012.

The threat of a siege became a reality on July 8 when the Syrian army captured a hill overlooking Castello Road. An average of 150 strikes per day were hitting the area, according to a member of the Syrian Civil Defense, a volunteer first response group operating across the country, making it impassable.

Here's a video uploaded by the Nureddin Zengi Brigade, a rebel group that operates in the Aleppo area, that shows fighting around Castello Road this week.

The encirclement of eastern Aleppo sets the stage for President Bashar al-Assad to deal a devastating blow against rebels still fighting in the city. It also threatens a humanitarian catastrophe for the 300,000 residents who have continued to live there throughout the fighting, many of whom now fear a prolonged siege.

“People are fighting each other, they are shouting for bread, anything,” said Ismail al-Abdullah, a 28-year-old activist living in eastern Aleppo. 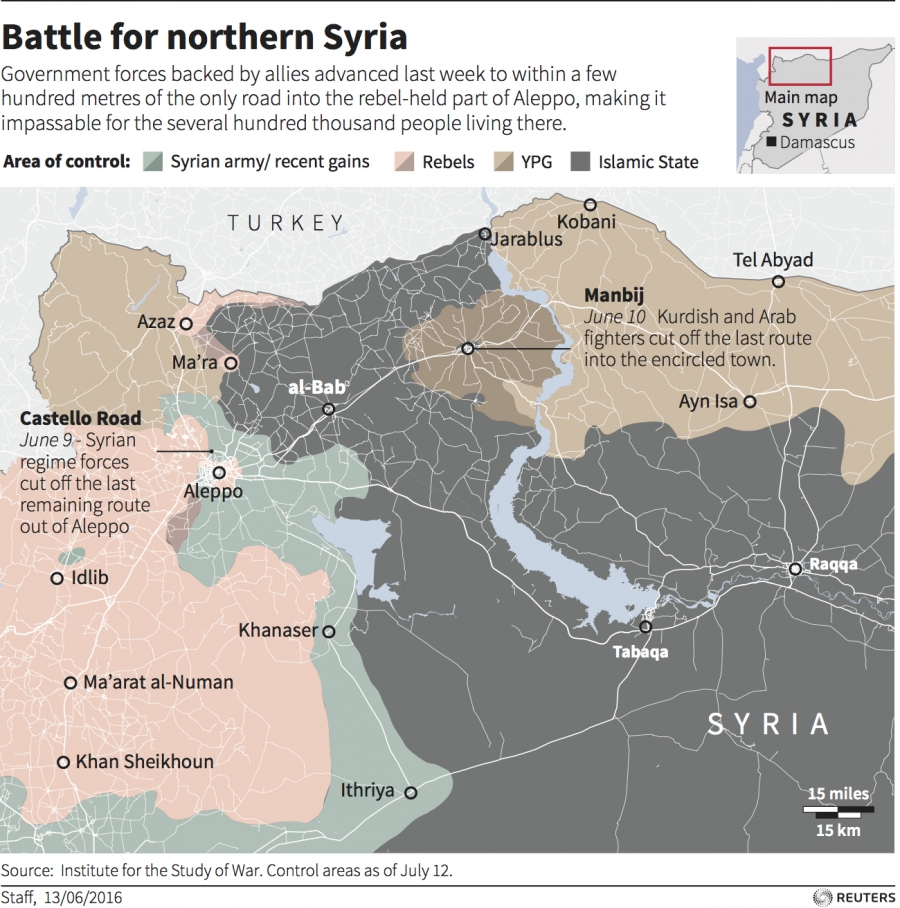 “Aleppo doesn’t produce any food. Now the road is cut we have no vegetables, no medical care entering Aleppo city,” he added. “There is nothing in the markets. And most people in Aleppo are too poor to store food for something like this. In three days we will run out of food.”

Nearly 600,000 Syrians are currently living under siege, according to the United Nations — the vast majority by government forces, but some by rebel groups and the Islamic State. Throughout the war, the Syrian government has used sieges to force the surrender of rebel groups, most notably in the city of Homs in 2014.

Eastern Aleppo is entirely dependent on aid groups for supplies of food and medicine. The UN said Wednesday that increased fighting in the area has put “200,000-300,000 people closer to the line of fire and at risk of besiegement,” and called all sides to allow access for humanitarian aid.

Speaking from the neighborhood of Al-Shaar, in east Aleppo, 27-year-old Saad al-Halabi said there was no electricity anywhere in the rebel-held parts of the city.

“Some private generators are still working. But they won’t work for long because fuel is running out,” he said on Thursday, adding that airstrikes were practically continuous.

“There is a general state of fear here about the siege. People think it will last for months.”

On Monday, rebels launched a counter attack to retake the hill overlooking Costello Road, but so far they've been hampered by airstrikes.

Abdullah, the activist, said 20 people were killed on Thursday by strikes on the city — both by the Syrian and the Russian air force. In Aleppo's government-controlled western area, a barrage of shells fired by rebels killed at least nine civilians, according to the Syrian Observatory for Human Rights.

The fighting has intensified despite a nationwide truce declared by the Syrian government on the Muslim holiday of Eid al-Fitr.

The situation in Aleppo looks grim for the northern rebels, and for the armed opposition as a whole. Once the industrial heartland of Syria, Aleppo has for four years been a key front line in the battle to remove Assad from power. Where other areas have fallen under the sway of more radical insurgents, Aleppo has largely been dominated by more moderate groups — some of which have received backing from the US.

“The northern region will be even more cut up into pockets of territory, while the government remains more or less cohesive and can put pressure at the most tender spots,” said Aron Lund, nonresident associate at the Carnegie Endowment think tank.

“It's devastating for the opposition. If they lose Aleppo, they're left with some patches of smoldering countryside, a few provincial towns, and enormous amounts of displaced people and exiles … I think in the longer run, they would struggle to remain relevant, politically speaking,” Lund added.

Where Kerry and Putin come in

Political relevance is especially important now. The US and Russia are in back-and-forth talks to reduce the fighting in Syria. Secretary of State John Kerry met with President Vladimir Putin in Moscow on Thursday to discuss closer military coordination in the country.

Civil defense members and residents inspect damage inside al-Aqsa mosque after an airstrike on the rebel held Al-Hilwaniyeh neighborhood in Aleppo on July 14.

According to a proposal leaked to the Washington Post, Kerry wants an agreement to include Russia and the US jointly attacking Jabhat al-Nusra, an al-Qaeda branch in Syria, and for Moscow to pressure its ally Assad to ground his air force. Human rights groups accuse Syrian and Russian government forces of repeatedly targeting civilian areas.

The US and Russia both view Nusra as a target. But other rebel groups on the ground — including some of the US-backed, more moderate ones — see Assad as the primary enemy, and have been reluctant or unable to take on the al-Qaeda affiliate.

The US has accused Russia of targeting not just Nusra but also moderate groups opposed to Assad. Moscow has justified its backing of the Aleppo offensive by claiming that Nusra is present there. Other rebels say the presence is minimal.

Read more: The other Islamic state: al-Qaeda is still fighting for an emirate of its own

US officials have expressed skepticism that Russia would respect any deal it agreed in Syria. In the meantime, Moscow is helping to create facts on the ground that raise the Syrian regime's bargaining power at any future peace talks. The movement to topple Assad is running out of options.

Speaking earlier this week, Anas al-Abdeh, the head of the official opposition in exile, lamented the lack of support for rebels, compared with Assad's powerful commitments from Russia and Iran.

"The friends of the regime are committing everything they have to help the regime, while our friends are not as committed in this regard," Abdeh told AFP.

"I do not see a real political will in the international community to reach a political solution in Syria."

Now, residents in the eastern part of Aleppo, many of whom have survived years of bombing and fighting, are thinking about leaving.

“Some of them ask every day if the road is open so they can go out of Aleppo,” said Abdullah.

“The others are waiting. They say: ‘We are not leaving our city. We won’t leave our people.’”