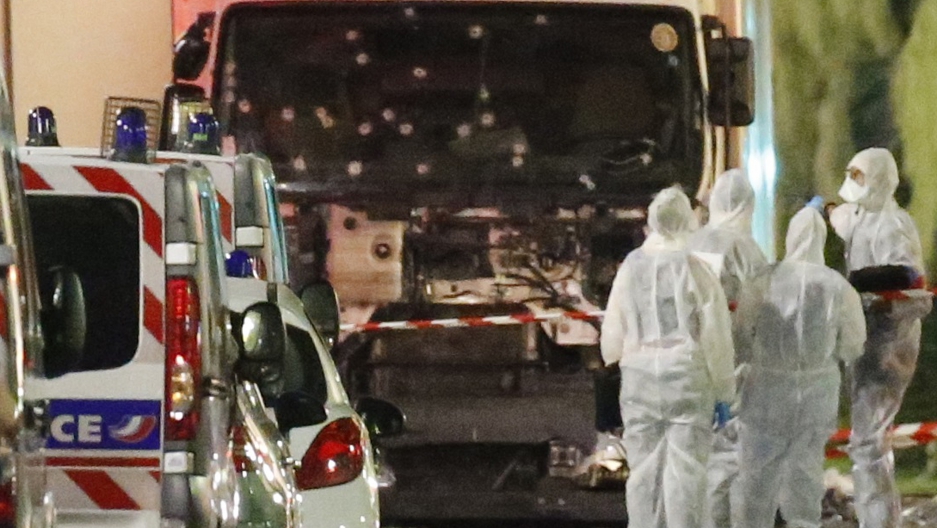 French police forces and forensic officers stand next to a truck July 15, 2016 that ran into a crowd celebrating the Bastille Day national holiday on the Promenade des Anglais killing at least 60 people in Nice, France, July 14.

A truck mowed through a crowd on a seaside promenade during a Bastille Day celebration in the French city of Nice in what President Francois Hollande called an attack of "a terrorist nature."

On Friday after the attack, Hollande extended a state of emergency for three months and declared three days of national mourning.

Terror, said Prime Minister Manuel Valls, would long plague France. “The threat of terrorism, as we have now been saying for a long time, is weighing heavily on France, and it will continue to do so for a long time yet."

French officials said the attack killed at least 84 people, including children. About 50 people were wounded, 18 of them critically, officials said.

French soldiers cordon the area after scores of people were killed in Nice when a truck ran into a Bastille Day crowd in the southern city of Nice.

The truck drove about a mile on the promenade. In a Twitter message, Christian Estrosi, the mayor of Nice, said the truck was carrying arms and explosives when it struck the crowd at about 10:30 p.m. local time.

Authorities said the truck driver was shot dead. Police say ID found with the attacker was of a French petty criminal, 31, of Tunisian descent, the AP reported. There was no DNA confirmation.

Interior Ministry spokesman Pierre-Henry Brandet said officials were investigating whether the driver acted alone. There was no immediate claim of responsibility.

"Nobody seems to have much doubt or ambiguity as to what this incident was," Paris-based journalist Vivienne Walt told PRI's The World.

7. See other screengrabs below showing how this is playing on channels that espouse ISIS' ideology: pic.twitter.com/A61KYFnm9c

Rebecca Giraud described her restaurant as 20 meters from the attack. Before the attack, she said, "It was really a great night for us ... We were full all night long."

Then, she heard screams and "everybody was running into the restaurant. ... We were so afraid." She told The World that they hid the people upstairs and in the basement, not knowing who was behind the attack. They left the restaurant without cleaning up later, and it was going to be closed on Friday.

President Barack Obama, in a statement, condemned the attack and said the United States stood by France.

.@POTUS on the attack in Nice, France: pic.twitter.com/CrbChxZs04

Below, a glance at terror attacks around the world since the November attack in Paris.