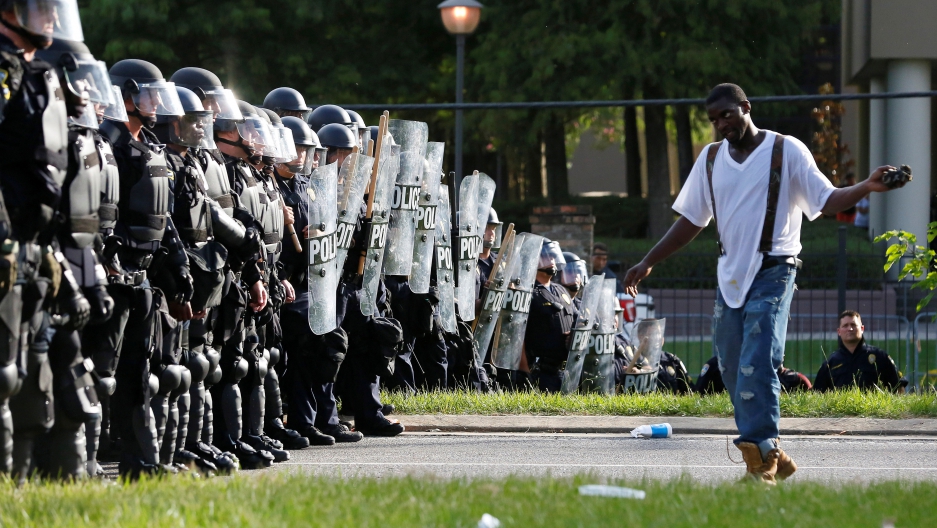 A demonstrator protests the shooting death of Alton Sterling near the headquarters of the Baton Rouge Police Department in Baton Rouge, Louisiana, July 9, 2016.

Earlier this week, President Barack Obama memorialized the five fallen officers from the Dallas Police Department who were killed in the city last week. During his speech, Obama also acknowledged both the special role and challenges faced by police departments in the US today.

“Your work, and the work of police officers around the country, is like no other," he said. "From the moment you put on that uniform, you have answered a call that at any moment, even in the briefest interaction, may put your life at harm's way.”

“It's a war on cops, and the Obama Administration is the Neville Chamberlain of this war," William Johnson, executive director of the National Association of Police Organizations, told Fox News last week.

Chuck Wexler, executive director of the Police Executive Research Forum, says that when it comes to violence against police, America is doing much better than we think.

“In the ‘60s and ‘70s, you did have a lot of police officers who were killed — more so than today — ambushed and deliberately killed,” he says. “You had the Black Panther movement and the fight back and forth between the police from New York to Oakland. ... It was a difficult time then, much like it is now, but overall, the numbers have come down.”

The modern media environment could be to blame for the disconnect between the statistics and public perception, Wexler says.

“What’s happened in the last couple years, I don’t think you can discount the impact of some of these very difficult videos,” he says. “When the American people see a side of life that is very difficult to watch — we’ve never had that. You’d have to go back 20 years to the Rodney King incident to see that searing image play over and over again. Now, today, it’s not unusual to see one kind of video or another that portrays police in a difficult position.”

“I think the troubling part from the policing standpoint is you’re not seeing what led up to that situation. Not that that would necessarily change what you see, but it might help you put it in context.”

However, overall, Wexler says American people are now “seeing a side of policing that they have not seen and are asking questions.” Yet, at the same time, he says most police departments engage their local communities in a constructive way.

“From a policing standpoint, we look at these types of situations — whether it be officer-involved shootings or attacks and ambushes on police, and we say how can we reduce overall fatalities on both sides?” he says. “And there’s also a responsibility on the part of the community to engage with the police, to work with them and be part of community policing programs. I think there’s some responsibility that’s necessary on both sides.”

Though it’s difficult to pinpoint an exact reason for the decline in police deaths, Wexler says body armor and seatbelts have made a huge difference.

“Those two things — we got labor and management together to agree on the mandatory wearing of seatbelts and body armor, so it’s sometimes difficult to compare [from years past] because those two factors can really cut down on officers dying,” he says.

Whatever the causes for the decline, Wexler says he doesn’t “believe that there’s a ‘War on Cops’ at all.”

“I think the good news, quite frankly, is that in most communities, there’s a good relationship with the cops,” he says. “I think the whole country, when they saw what happened in Dallas, was just stunned. ... At the end of the day, the good news is that overall crime is down compared to 20 years ago.”

For the most part, Wexler believes that the general public is sympathetic and supportive of those in law enforcement.

“But it doesn’t mean there’s not a lot of room to change and to find more strategies to de-escalate some of these situations that don’t involve firearms,” he says. “We really need to find ways to build upon what we’ve already done, but there’s a lot to learn from last week.”