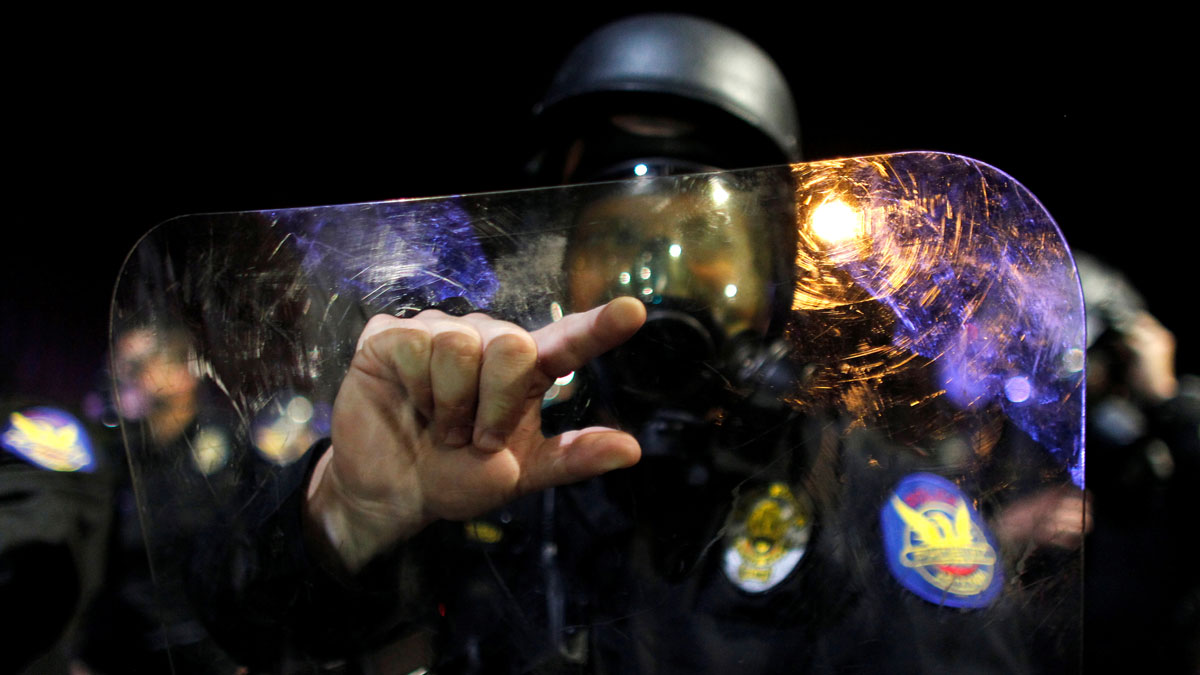 A police officer gestures during a demonstration that denounced the fatal shooting by police of two black men in Phoenix, AZ, July 8, 2016.

When traveling to the US from a different country, interactions with the police may be dangerous for black men.

Jerome Sawyer attended St. Augustine's College in North Carolina, where he says he experienced racism, and still does as a Bahamian journalist traveling around the world.

"I can very much relate to the experience of an African American man and an experience with the police who are sometimes profiling or may come from a typically racist position. I understand that experience. I know what it is," Sawyer says. "I know what it's like to be looked at suspiciously or to be pulled over for no apparent reason. Even now, as a journalist, sometimes when I travel places, I'm treated differently. I know what millions of black Americans face every day. I would have lived it and sometimes continue to live that experience."

The Bahamas is advising its citizens visiting the United States, particularly young men, to "exercise extreme caution" in their interactions with police, following the two recent high-profile police shootings of black men. In a statement issued last week, the Bahamas' Ministry of Foreign Affairs and Immigration said, "We wish to advise all Bahamians traveling to the US but especially to the affected cities to exercise appropriate caution generally."

The travel advisory may not make Bahamians unpack their bags just yet, but it is being taken seriously.

"Whenever there is an event around the world where Bahamians may be going — whether it be the UK, the Middle East or the United States — it is the duty of the government to inform its citizens to be aware and to be conscious. I think what [the travel advisory] did was it raised a consciousness," Sawyer says.

The Bahamas was joined by other countries, including Bahrain and the United Arab Emirates, that are also cautioning their citizens about visiting the US.

But the Bahamas' warning really stands out. It's a country whose own crime rate was recently described by a US diplomat as "frightening," despite its popularity as a tourist destination less than a two-hour flight from Florida.

"It's no secret that we're a small country, but we do have a crime problem," Sawyer says. "A lot of times Americans are advised about coming here. We are many times recipients of those US travel advisories. When this was issued, a lot of Bahamians saw it for what it was. We are now taking proactive steps to protect our citizens just as the US does for its citizens all the time," he explains.

Bahamian police recorded 149 murders last year, in a country with a population about 400,000, according to the US government's Overseas Security Advisory Council.

The travel advisory was issued just two days before the Bahamas' Independence Day, commemorating the islands' breakup from the UK in 1973. Much like other Caribbean nations, the Bahamas deals with its own battles against racism and neocolonialism.

"I think it saddens a lot of Bahamians who would have come through a similar situation in our own country. We are a predominantly black country. We only gained self-governance in '67 and independence in 1973, so these struggles are not very far from our memory," Sawyer says.