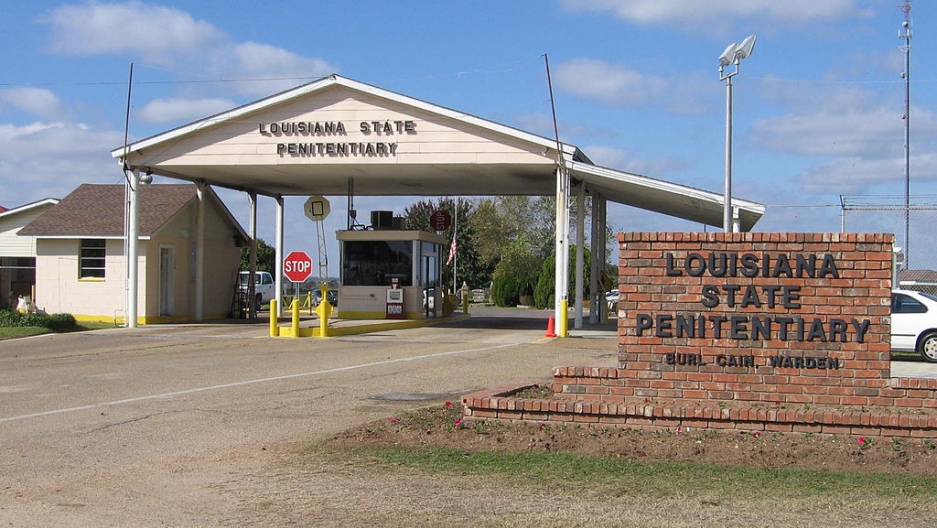 The Louisiana State Penitentiary is the largest maximum security prison in the US. It was a slave plantation before it was a prison.

After the death of Alton Sterling — and Philando Castile, Jamar Clark, Tamir Rice, Michael Brown, Freddie Gray, Trayvon Martin and all the other people of color recently killed by police — many questions will likely go unanswered.

We won’t know the exact motivations of Blaine Salamoni and Howie Lake, the police officers who killed Sterling. We won’t know what was going on in Sterling’s mind during his last moments. We won’t know the precise sequence of events as they unfolded before another African American man — one among 187 in this year alone, according to Mapping Police Violence — died while interacting with police.

Why does this keep happening?

This is a map by the data research and advocacy group Mapping Police Violence. The organization says 187 black people have been killed by police so far this year, as of July 12, 2016. In 2015, 346 black people were killed.

In the recent past, we know that the Baton Rouge Police Department has a documented history of brutality against African Americans. Nola.com deputy opinions editor Jarvis DeBerry noted in a July 6, 2016 column that a state trooper from Michigan who was temporarily stationed in Louisiana after Hurricane Katrina submitted an official report saying that Baton Rouge police officers offered to let him beat an incarcerated person to thank him for his work.

A state trooper from New Mexico, meanwhile, claimed that Baton Rouge officers “were engaging in racially motivated enforcement.” In 2014, a Baton Rouge officer resigned over a department controversy about racist text messages, and earlier this year one of the city’s officers was caught on video repeatedly punching a teenager in the head as other officers held him down.

Meanwhile, the two officers involved in Sterling’s death, Blane Salamoni and Howie Lake, have each been investigated several times by the Baton Rouge Police Department for their use of force while on duty. And in addition to Sterling, at least 10 other people have been injured or killed during interactions with police in Baton Rouge since 2013. The officers were cleared of wrongdoing after internal investigations in all the incidents.

In the case of Alton Sterling and police violence in Baton Rouge, though, recent violence in Louisiana is tangled up with the state’s roots in slavery.

About 80 miles southeast from the place where Sterling drew his last breaths, the city of New Orleans was once home to the largest slave market in North America. Historian Walter Johnson wrote about the horrors of that market where many thousands of enslaved peoples of African descent were bought and sold, and then transported to plantations across the southern United States. 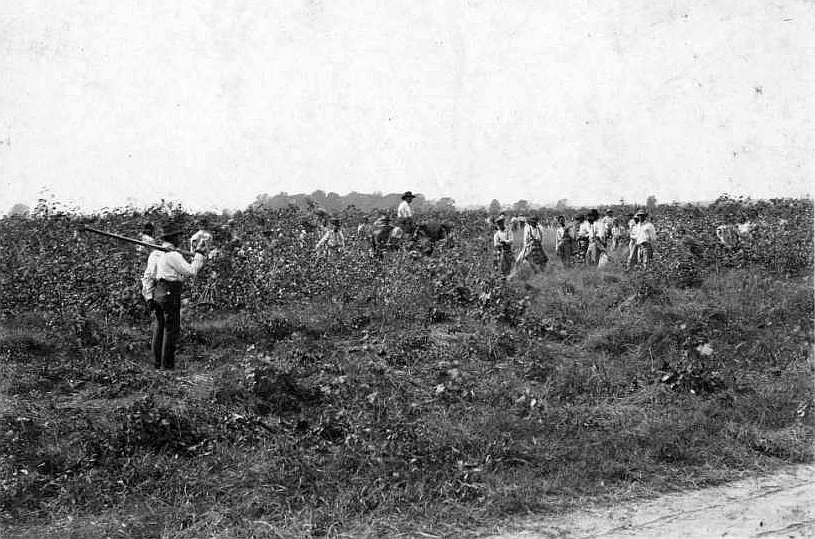 A group of black convict laborers pick cotton at Angola in 1900.

Many of those slaves wound up on the cotton plantations in and around Baton Rouge. One of those plantations was named Angola, after the African country where thousands of people were taken and turned into slaves. In 1880, a former officer in the Confederate Army during the Civil War named Samuel James purchased the plantation. The James family was at that time in charge of Louisiana’s correctional system. In 1869 they signed a lease to manage Louisiana’s first state penitentiary in Baton Rouge. Shortly after purchasing Angola, James began housing inmates at the former slave plantation.

The everyday brutality that defined slavery at plantations like Angola did not end when the so-called “peculiar institution” was abolished after the Civil War.

As historian Michelle Alexander observes in “The New Jim Crow,” slavery was one form of racialized social control that spawned several others, including Jim Crow segregation, mass incarceration, excessive use of force by police and other law enforcement strategies that disproportionately target African Americans and other people of color. In keeping with this pattern, slavery’s legacy of brutality manifested in Angola as it gained a reputation as one of of the bloodiest prisons in the country.

The 13th Amendment ended slavery in 1865, but it also created a loophole that legalized slavery if it was “punishment for crime.” In her 1998 essay, “From the Prison of Slavery to the Slavery of Prison,” scholar and activist Angela Davis explained that the southern states hastily passed laws called “Black Codes” that “criminalized such behavior as vagrancy, breach of job contracts, absence from work, the possession of firearms and insulting gestures or acts” — making it all too easy for African Americans to find themselves once more in bondage. 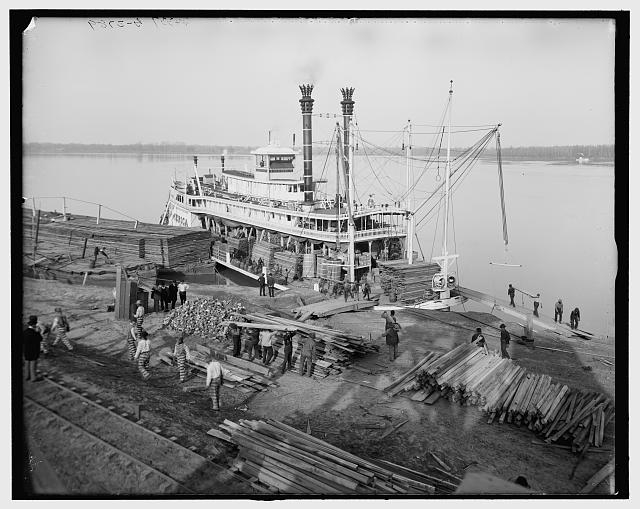 Prisoners at Angola process lumber at a dock on the Mississippi River, sometime between 1900 and 1910.

Enforcement of the Black Codes dovetailed with convict leasing, a dual system of labor and incarceration that allowed private business and planters to “lease” prisoners from states like Louisiana and subject them to hard labor. In Louisiana, individuals who found themselves jailed at Baton Rouge or Angola were likely to end up working for private corporations repairing levees, building railroads or picking cotton.

By the 1890s, newspaper reports of the violence inmates faced at work and behind the prison walls at Angola created enough public outcry that in 1901 state officials ended the privatized correctional system that had been in place for decades. But state oversight didn’t end the violence that was routinely dealt against Angola’s disproportionately high population of African American prisoners.

In the 1940s, a former inmate published a series of articles for New Orleans newspaper The Item called “Hell on Angola.” In the series’ first installment, he wrote that the story of Angola was one of “Murder, mayhem, and savagery. Brutality, filth, and starvation. Legal ‘killings’ and criminal negligence.” Prisoners faced so much violence at Angola that in the 1950s over two dozen people incarcerated there slashed their Achilles tendons to protest their treatment by prison guards.

Warden Burl Cain, who resigned in 2016 after over two decades at the helm of Angola, is often credited with stemming violence there. But the penitentiary continues to come under fire as the embodiment of “American slavery, reinvented,” as a headline in The Atlantic proclaims, where prisoners work for wages as low as two cents per hour and can face punishments as severe as solitary confinement if they refuse to work.

This system was part and parcel of a system of extralegal violence in Lousiana. Before Angola filled its beds, the Ku Klux Klan — who fancied themselves as vigilantes seeking to restore the status quo of white supremacy in the emancipated south when they first organized in 1866 — ushered in a “reign of terror” that resulted in the deaths of thousands of African Americans before the federal government began to suppress the infamous white supremacist group’s activities in the early 1870s. This wave of violence foreshadowed lynch mobs — who claimed they were taking the law into their own hands — and the nearly 5,000 lynchings in the US from 1882 to 1968. The vast majority of the victims in these lynchings were black men and women, according to the Census Bureau. While the annual number of lynchings started to decline in the early 20th century, the number of court-ordered executions began to rise at a staggeringly disproportionate rate for people of color. In a 2015 report called “Lynching in America: Confronting the Legacy of Racial Terror,” the Equal Justice Initiative noted that African Americans were only 22 percent of the population in the US south from 1910 to 1950, but accounted for 75 percent of executions.

That 20th century disparity in execution rates is mirrored by contemporary rates of incarceration, which have exploded since the "War on Drugs" began in the 1970s. Today, nearly 2.3 million people are locked up in the US. About 1 million are African American. Kelly Lytle Hernández, a historian at the University of California, Los Angeles, says that like slavery and Jim Crow, mass incarceration at Angola and other prisons throughout the US is a “killing machine. It has locked black families and communities in cycles of disease, stress, violence, disenfranchisement, poverty, execution, and stolen kin; all of which lead to premature death.”

Whether facing death on the streets, as Anton Sterling did, or behind prison walls at Angola, the brutality that defines policing is not without precedent. The numbers suggest Sterling also won’t be the last Louisianian to bear the burden of the state's policing history. Louisiana has one of the highest rates of incarceration in the world. And according to the American Civil Liberties Union, black Louisianans represent almost 92 percent of individuals who are serving life-without-parole sentences in the state’s prisons.

“As we think about these police killings,” says University of New Orleans historian Benjamin D. Weber, “we need to try and remember how each element of what happened is in part overdetermined by this country’s unique genealogy of racial violence against people of color.”