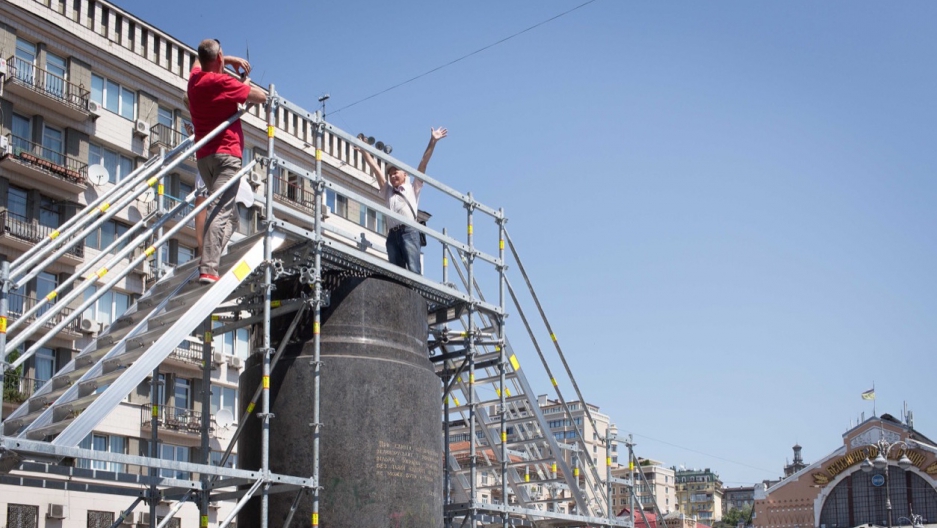 The latest photo opp in Kiev: stand where the big Vladimir Lenin monument once stood and say cheese!

Anyone in the Ukrainian capital who’s ever dreamed of standing in Soviet founder Vladimir Lenin’s shoes now has their chance.

A new art installation built over the pedestal that once held Kiev’s largest Lenin monument — toppled in late 2013 during street protests — allows people to climb up for a photo and, presumably, experience lording over a downtown boulevard for a few minutes.

“This is a chance to stamp oneself into the chronicles of history,” joked Vladimir Vasilyevich, a 66-year-old retiree who recently visited the site.

The installation, by Mexican artist Cynthia Gutiérrez, is part of a larger exhibit about public spaces in Ukraine. It comes at a time when the government is pursuing a controversial “decommunization” campaign aimed at ditching the country’s Soviet past.

That’s meant renaming hundreds of settlements, countless streets and squares that once bore USSR-themed names. Since this particular statue was torn down by protesters in December 2013, more than 1,000 other Lenin monuments have been toppled or removed across the country — a trend nicknamed “Leninfall.”

Supporters believe clearing symbols from Ukraine’s troubled history is a necessary step toward joining Europe. But it has also set off a storm of criticism.

Some of the public is angry about the government apparently replacing one controversial figure with another. That was the case when the Kiev City Council renamed Moscow Avenue last week in honor of a World War II-era insurgent leader, whose fleeting alliance with Nazi Germany has earned him scorn and is exploited by Russian state propaganda.

Others complain that officials are forcibly stamping out nostalgia among older generations for their collective history. When parliament renamed the industrial powerhouse of Dnipropetrovsk to simply Dnipro (after Ukraine’s largest river) this past spring, the mayor himself warned it would make locals unhappy.

Farther upstream, residents of the former mining town of Komsomolsk banded together to denounce their new name — Horishni Plavni, which translates roughly to “Upper Reed Beds” — which they believe sullies their proud proletarian history.

Here where Lenin stood, however, locals appear to be taking things in stride.

Vasilyevich, the retiree, said he’d rather not see monuments toppled. But he doesn’t mind their removal if they’re taken away carefully and stored in a safe place.

“It’s the new generation, you know?” said Vasilyevich, who made sure to be photographed from virtually every angle atop the pedestal. “They’re a little bit different.”