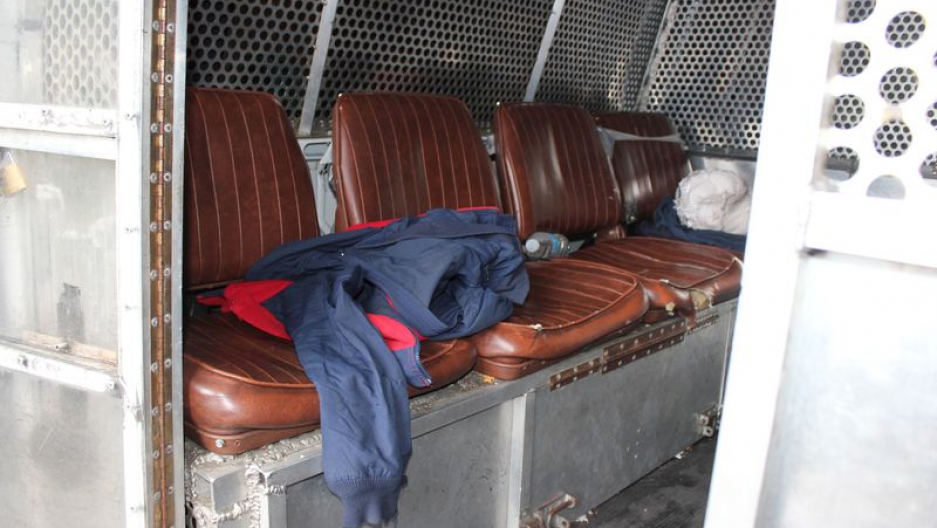 The inside of a private prison transport van.

The Marshall Project/Georgia Bureau of Investigation

As the prison population continues to grow, states looking to cut costs have turned to private companies to transport prisoners. But an investigation by The Marshall Project, a reporting outlet focused on criminal justice, found serious problems with the industry.

At least four people have died in the backs of private prison transport vans since 2012 — two from ulcers that coroners later said could have been easily treated. Another dozen prisoners and guards have died in crashes since 2000. The Marshall Project's investigation found many of the crashes were late at night, and possibly the result of pressure to make the trips as quickly as possible. In the aftermath of the report, US Attorney General Loretta Lynch announced that her office would investigate the practice.

Roberta Blake, one of the voices featured in The Marshall Project story, spent two weeks in one of these private transport vans when she was extradited from California to Alabama.

“When I stepped out of the Ventura jail facility and I looked at the van, I was expecting a bus. And I seen the van and I'm like, 'Where are the restrooms?'" she recalls asking. The guard told her they'd stop every couple of hours.

"I was in the van maybe an hour, it was pitch black, I had no clue who was behind me, next to me, I couldn't see anything," she says. "And after an hour I was like, there's no way I can make it 10 days like this. I was handcuffed, shackled together in this small section. I couldn't move, I couldn't turn, I couldn't sleep. And [the guard] informed us that every three days they were required to stop at a jail and house us, every three days."

She was the only woman during the trip. She was kept separate from the male inmates, but she says the grate between them was kept unlocked, so the men could open it at any time.

But Blake says there was no such camaraderie with the guards.

During one particularly awful moment, Blake says the guards refused to pull over to let her use a bathroom. Instead, they handed her a McDonald's cup.

“There I am, I'm handcuffed and shackled, they wouldn't undo a cuff, they wouldn't do anything," she says. "The van is moving and honestly, I had trouble pulling down my pants, and the guys next to me ... We had opened [the segregation cage] and he pulled my pants down for me. I don't know him from Adam, he pulled my pants down for me as I peed in the cup. Then held my cup as I wiped with napkins, and gave me my cup back and kind of the big joke was don't drop the cup as he was pulling my pants back up for me. Later I find out one of the inmates in there was in there for rape.”

The Marshall Project confirmed her story with other inmates who were with her in the vann.

Blake was eventually convicted of a misdemeanor in Alabama, for returning a rental car late, even though she says she had paid all the fees. She spent three weeks in jail before taking a Greyhound back to California.

Eli Hager, a reporter for the Marshall Project who co-wrote this story, spoke with dozens of inmates and guards who had spent time on these vans.

"It's important [to note] that a number of the people on these vans have not been convicted of any crime, because they're being brought to face charges," he said. "Although they are sitting on the van next to convicted murderers and convicted rapists and they're all mixed together and there's no organization by charge."

He adds: "I also think there are more human ways to do this. The business model is such that these van companies are driven to pack the vans with as many people as possible, since they're paid per prisoner, and they're also incentivized to drive at all hours through the night because they're paid by the mile by the jurisdiction."

For Blake, the nightmares didn't end when she made it back to California. She says she still relives the trip, and says she lives in constant fear that she will be picked up again. Looking back, she says she barely made it through those two weeks.

“I prayed. I prayed. That was, that was the only thing. ... That is what got me through it. I prayed. I've never really been very big on religion but I prayed. I became a believer that, during that time. Because when it would get too hard it was like something, ok we're making it to a facility and I can go in and I can breathe.”

Editor’s Note: The audio portion of this story incorrectly states that Roberta Blake was a prison inmate. She was moved across state lines in a private prison transport van to face charges in Alabama before she was ever convicted.