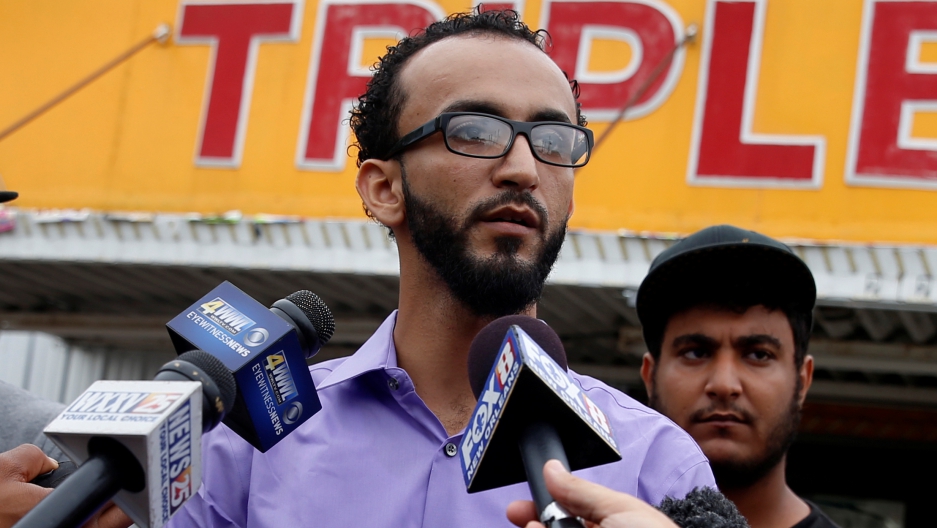 Abdullah Muflahi, owner of the Triple S Food Mart where Alton Sterling was shot dead by police, speaks to the media in Baton Rouge, Louisiana.

Abdullah Maflahi filmed the July 5 shooting death of Alton Sterling in Baton Rouge, Louisiana. Then he became the subject of the next police incident there.

Muflahi is a Muslim, born in Yemen and raised in the Detroit area. In his early 20s in 2010, he went to Baton Rouge to open a business, the Triple S Food Mart. He knew the Sterling family — they were customers.

He says Alton Sterling was a regular. "He had a big heart, he always gave back to the community, always tried to help anybody that was short on some things that they wanted to buy," the store owner recalls. "He would walk in then and pay the rest. He was a very friendly guy."

Muflahi used his cellphone to record what would become known as the "second video" of Sterling's death. He watched a horrible scene play out in front of his store, and then saw police officers coming for him.

"They threw me in the back of a cop car for almost four hours," he remembers. "It was hot, the seat was hot, and when I [told] them that I needed to use the bathroom, a cop escorted me to behind a building — one of the neighboring buildings — and told me to go there while people were walking [by] to go see what was going on in front of the store."

It was humiliating, he says. "A lot of people thought I had got arrested and [that] I had something to do with it."

Muflahi says police put him back in a squad car in the Triple S parking lot for another hour, then drove him to headquarters for questioning. "They locked me in a room, apart from the other witnesses, and only let me out to make my statement. Then an officer threw me in the back of another cop car and drove me back." By the time he returned to his store, police tape was on the door and Muflahi was not allowed inside.

He says the police did not show him a search warrant. And he says they took the surveillance video equipment that would have captured the entire incident, start to finish.

Now Muflahi is suing the Baton Rouge police officers who detained him, along with the police department and the city.

"They violated my rights. I was just a witness to a horrible scene [that] left me traumatized and kind of emotionally unstable."

Although Baton Rouge police had confiscated his phone the night of the killing and held it for five hours, they apparently did not know what it contained. Muflahi, with his attorney, released his cellphone video a day later.

It's been seen tens of thousands of times and drawn a lot of attention, some of it pretty abusive, referring to the Dallas shootings of police officers that came days after Sterling was killed.

"They're just blaming me," Muflahi says. "A lot of people [are] blaming me for what happened in Texas. Like what happened in Dallas was because of 'the Muslim in Baton Rouge.' And it's very hard to even repeat everything they have been saying ... about me."

Muflahi admits he has stopped looking at social media entirely. It's been getting on his nerves, upsetting his stomach, and making it hard for him to sleep at night.

"You know I'm scared of all this coming back on me, like retribution," he says, "and I feel like somebody might come back and hurt me or hurt my family. Business has been kind of hurt, and it's really messed up my life a little bit."

Muflahi is getting support from his Triple S customers, though. That includes Alton Sterling's aunt, Sandra Sterling. She asked Muflahi to speak at her nephew's funeral.

We reached out to Baton Rouge authorities for their side of the story. Parish Attorney Lee Ann Batson responded with an email. She wrote, "We have a policy of not commenting on pending litigation."