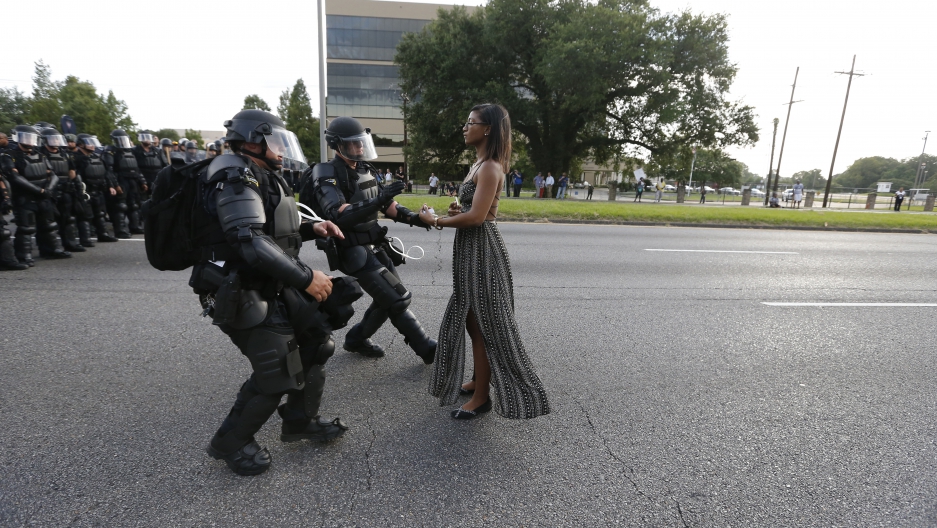 A demonstrator protesting the shooting death of Alton Sterling is detained by law enforcement near the headquarters of the Baton Rouge Police Department in Baton Rouge, Louisiana.

Are we looking at a new American battlefield in the summer of ’16, or a very old one?

The morning after the Rodney King riots in Los Angeles in the spring of 1992, smoke and fire rose over a city that became a battlefield — the images shocked America into accepting that the criminal justice system might have little to do with crime or justice, and lots to do with race and poverty.

It was an enormous shock in 1992, one that was repeated after the verdict in the O.J. Simpson criminal trial in 1995. Should it have been such a shock? Looking back from 2016, the idea of a dual criminal justice system in the land of liberty now seems more a subject for a high school social studies textbook.

The shock, if anything, is for how optimized this dual system has become in the subsequent 24 years.

That’s all people are talking about on the steamy summer stoops in my neighborhood this July. The long hot summer of ’16 is just getting started, but where is it headed? Every American has to stop and ask: “Is this happening in my community. ... Will it? What will we do if and when it does come to my home?”

Last week, an angry veteran named Micah Johnson decided to target white cops at a peaceful demonstration in Dallas; five police officers are now dead. Are murders like these on their way to all of our neighborhoods? The black police chief in Dallas, David Brown, has lost his own son and numerous officers to this scourge.

“All I know is this must stop,” Brown said last Friday.

But the anger keeps going. It’s being flamed by angry demonstrators, and also people like former New York Mayor Rudy Giuliani, who sounded positively liberated last week after declaring that the Black Lives Matter movement must answer for the dead Dallas cops.

“Black Lives Matters is racist,” he repeated over and over again on cable TV. The head of the National Association of Police Organizations accused President Obama of supporting a “War on Cops,” even as black leaders take him to task for seeming to favor the Dallas cop victims over the dead African-American civilians like Alton Sterling and Philando Castile.

Is race war plausible in America? There is a ready-to-go narrative of racial warfare in America. It sits on the shelf with all of our other history books going back two centuries.

There was the slave rebellion in New York City in 1712, and the even bigger rebellion called The Great Conspiracy of 1741. John Brown's “Reign of Terror” was the spearhead of the abolitionist movement, but it was also widely believed to be a plot by the North to create a race war in the South to subdue it economically and politically.

In shooting President Abraham Lincoln, John Wilkes Booth reportedly claimed: "This country was formed for the white, not for the black man." This theme was picked up by the KKK in its angry, murderous and garbled calls for white power throughout the second half of the 19th century and first half of the 20th.

Among the voices of the Black Power movement were Malcolm X, and advocates of the armed struggle like Stokely Carmichael and the Student Nonviolent Coordinating Committee from which this famous statement came:

“I say violence is necessary. Violence is a part of America’s culture. It is as American as cherry pie. Americans taught the black people to be violent. We will use that violence to rid ourselves of oppression if necessary.”

Jamil Abdullah Al-Amin, also known as H. Rap Brown, delivered that message back in 1967. The Black Lives Matter movement of today would be very recognizable to white and black activists of the 1960s, and it has attracted very familiar attacks from white public figures.

The ghosts of white radicals haunt these crime scenes of today. In Charleston, South Carolina, in 2015, Dylann Roof shot nine African Americans at a prayer meeting. Ghosts calling for a race war, like in the white supremacist bible “The Turner Diaries” from 1978 (a dreadfully written novel about an imaginary race war), may have inspired Roof in 2015 just as it did Timothy McVeigh 20 years earlier when he carried out the Oklahoma City bombing.

President Obama was at the Charleston Memorial last year, and he has condemned the recent police shootings of African-Americans in Baton Rouge, Louisiana and St. Paul, Minnesota, and he cut short his European trip to speak at the memorial service for the slain cops in Dallas.

His Charleston speech a year ago was a remarkable moment of clarity, empathy and unity for the entire nation. What will Dallas bring? Is there a bridge linking these two communities? Can Obama build a bridge from Charleston to Dallas? Can he link a community of African Americans trying to heal from a shooting that evokes a history of inequality and violence that may be ending, to a community of law enforcement officers and their families trying to heal from a shooting that evokes centuries of privilege and power that also may be ending?

It seems like too large a gap. When I ask my neighbors and friends what we must do now, we find agreement in these troubled days. To see where we are going we must dismantle the superficial language of the “9/11 America standing up to terrorism,” or the “Greatest nation on Earth, America.” We need to retire these outmoded and dangerous delusions of a mythical past and replace them with something like the “Undaunted America.” A nation determined to create a new mythology out of the real struggles of finally doing what it takes, and what has been postponed for so long for all of our citizens to be free.

We could start with that bridge from Charleston to Dallas.

John Hockenberry is the host of PRI's The Takeaway.