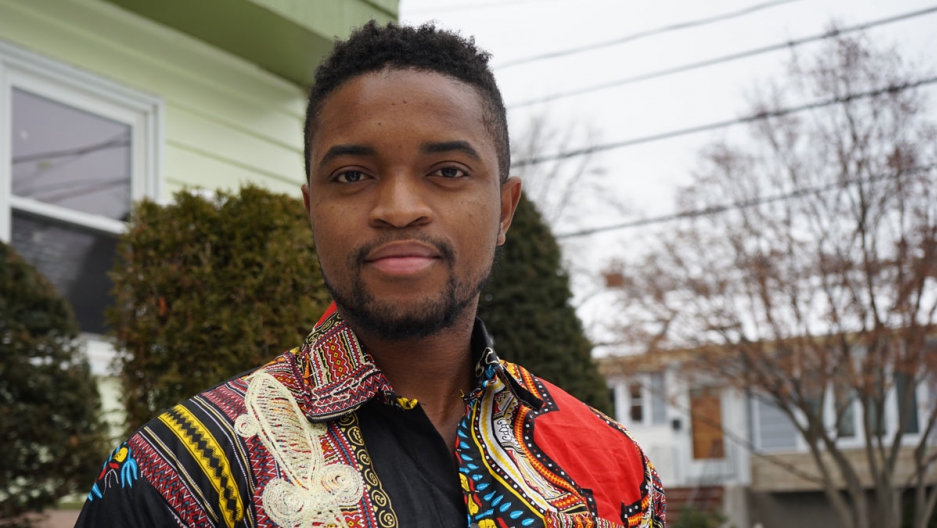 Jefferson Krua fled Liberia as a refugee at age 5, and eventually settled in Boston, MA. Recently, he's moved back to Liberia to help with re-building the country's infrastructure.

Mercy Krua and her son Jefferson are having a disagreement. It’s about whether he should move back home.

We’re sitting on her living room couch in Boston, where she’s eager to show off his childhood photos. This one’s from graduation, another one’s from the refugee camps in Ghana. She’s reminded of what life was like before they fled Liberia, in the midst of its bloody civil wars.

Jefferson was just a small child then, and when he was hungry or tired, she couldn’t offer something as simple as a snack. Tears would follow, and she would panic, for fear of being discovered: “So you need to make sure the kids don’t cry, to bring like, to raise awareness that people or civilians are in the area. Cause they didn’t really care, they were killing everybody. So it was difficult, terrible.”

But Jefferson remembers it differently. He was just 5 years old when they left, and it all felt like an adventure. Hiding in the back of a UN food truck to gain safe passage out of Liberia, escaping through the jungles of Ivory Coast, before landing in the refugee camps of Ghana, where they spent seven years.

Jefferson says when they eventually arrived in the US, that’s when he remembers that life got hard. It was the 1990s, and he was about to start middle school.

He takes me back to the housing projects in Boston where he spent most of his teen years. He reminds me to lock the car door, and points to the street corner where he was jumped and his cousin was mugged, all while the school crossing guard looked on. We hear the sounds of squeaking swings, and kids shouting in Cape Verdean and Creole, so they can be heard over the blaring of the police sirens and ambulances driving by.

When Jefferson was a kid here, he tells me, he was allowed to go from home to school to church, and that was it. He kept his head in the books, and made it to college — to Cornell, where he met other Africans, who weren’t refugees, but wealthy international students. Here it was cool to be African. The university housed a rare collection of journals, where he learned about Liberia from scholars.

He admits the irony of having come to America, to a remote place like Ithaca, NY, to learn about his family’s roots. He learned to speak the language again, studied civil engineering, and set his sights on going back to Liberia. He’d heard of other young Africans– who went to school abroad—and were returning to the Continent.

So Jefferson moved back to Liberia last summer, just after the Ebola crisis had ended. He remembers what it was like, when first arriving. “Man, I wanted to kiss the ground.  I was so excited,” he says. “It’s like everybody talks like how you talk in your home, and it’s just a nice feeling to not be the other.” 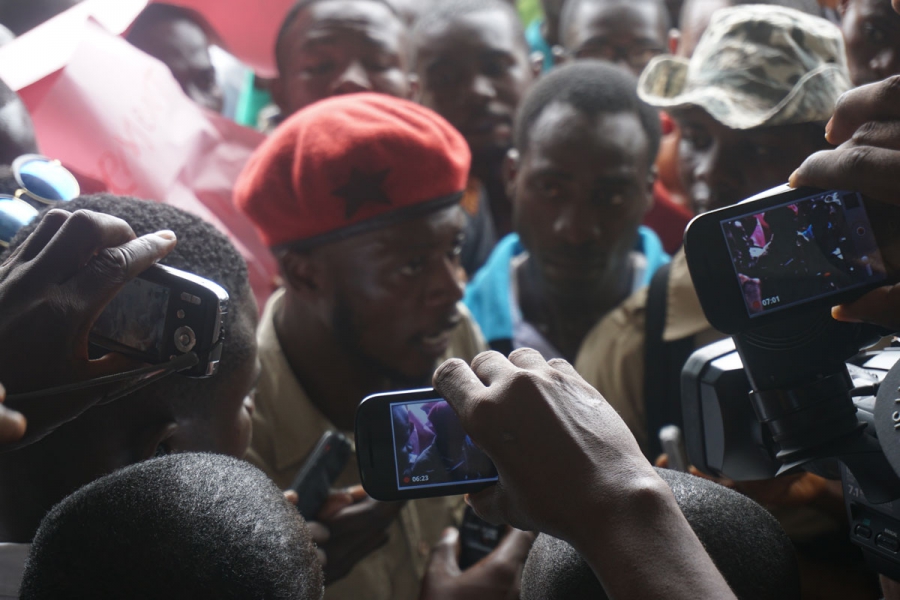 Jefferson launched a digital news outlet in Liberia called the Bush Chicken. Here is a photo he took while on assignment, covering a student protest against proposed tuition hikes at the University of Liberia.

He launched a digital news outlet called the Bush Chicken, which trains journalists to report with accuracy. He’s also working on a start-up to bring a bike share program to Monrovia, where it can take hours for kids to get to school.

But his mother worries for Jefferson’s safety, and says all she can do is pray. They no longer have family to look out for Jefferson in Liberia, and the fruit trees, where they ate mangos and avocados from daily — all of these were gone as well. The land isn’t theirs anymore, and so for her, home has vanished, too.

For his mother Mercy, America is the place that’s provided opportunities. In the refugee camps, there were no jobs to be had. But here she worked long hours as a nanny, caring for someone else’s kids, so she would have enough to care for her own. She saved enough to finish nursing school, and now works as a registered nurse.

“Honestly, I’m from Liberia,” she says. “But wherever I am right now I consider it to be home. Wherever you are, where you see that you can make a day-to-day living, I consider it home for me.” 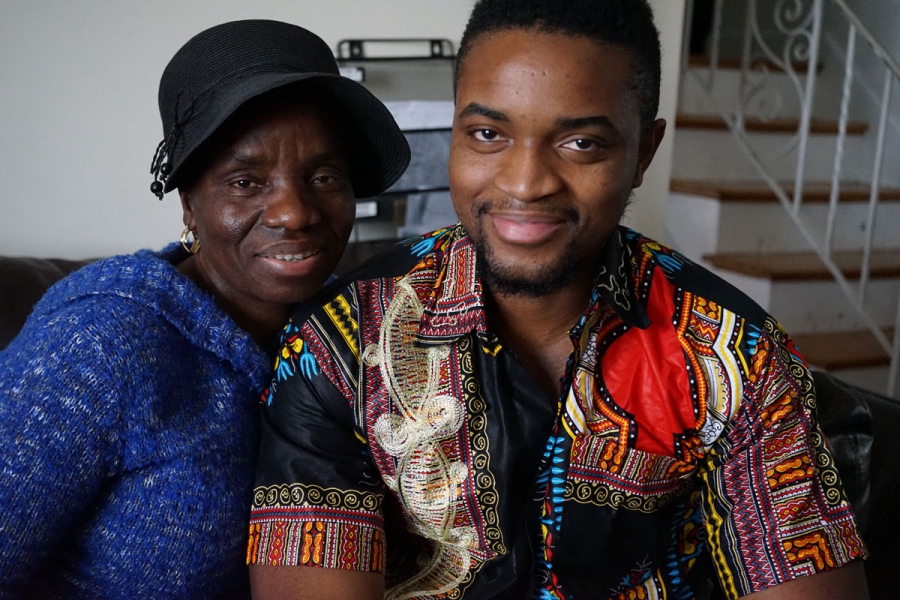 Mercy Krua, and her son Jefferson Krua, on her living room couch in Boston, MA.

She doesn’t want to talk about Liberia anymore — the memories make her sad, she says. Instead, she proudly shows me a picture of President Obama and Martin Luther King, Jr. hanging on her living room wall of the home she now owns.

But Jefferson tells me this story about a run-in he had with the police, just in front of his mother’s house in Boston, when visiting not too long ago.

“They’re questioning me, but one of them is so aggressive,” Jefferson says. The policeman shouts at him, as Jefferson searches for his license: “Why are you taking so long?  Don’t you know it’s cold out here?”

Jefferson admits, “And as a black male in America, I am just scared.”

He continues, “So with something like that, it’s really hard to call America home. No matter how much money I can make in this country, whatever, I’m always going to be a black man in America.”

But in Liberia Jefferson is the 1 percent. He shows me photos of the resorts he frequents, the press badge he flashes that gives him access. He can even put on an American accent whenever he needs it — something that affords you respect in Liberia. He dreams of becoming Minister of Transportation, and he’s chosen not to become a US citizen, so he can be poised to enter politics there.

“All my dreams, everything, all my goals in life they’re focused on Liberia,” says Jefferson.  He continues, “I have these nightmares where, I wake up and I’d just be sweating, and it’s basically Liberia got into another war again.  And that’s a fear for me, because I don’t know what I would do.”

But for now, he’s embraced the opportunities his new home has given him, and he’s committed to helping rebuild the country, so that he says, “things like war aren’t so likely to happen again.”

This story was produced with the support of the Images and Voices of Hope's Restorative Narrative Fellowship. An earlier version of the story incorrectly characterized his US status. He was a green card holder, which made him eligible for US citizenship, but he chose not to pursue that option.