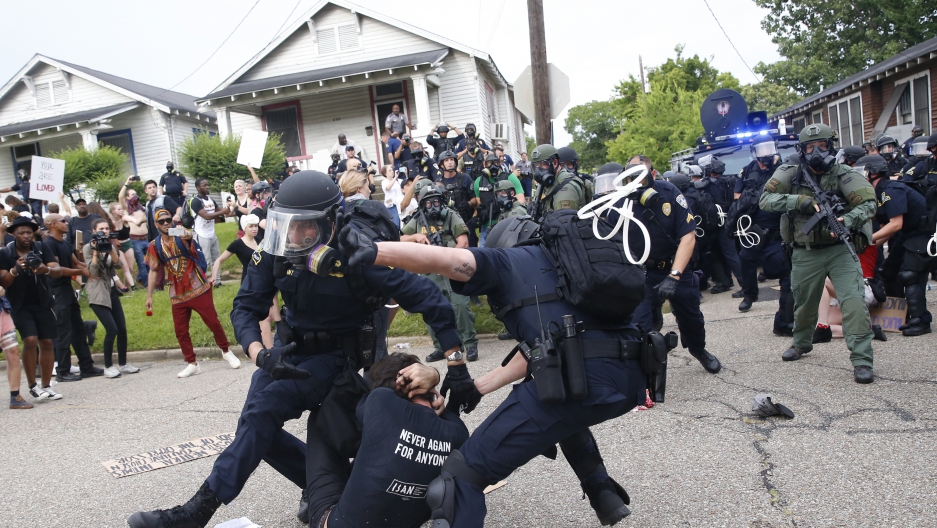 Police scuffle with a demonstrator as they try to apprehend him during a rally in Baton Rouge, Louisiana.

My brother, Tom Vargas, a Chicago police officer, worked in Englewood, one of Chicago’s most violent and gang infested neighborhoods. On the morning of June 1, 2009, I woke to news of a young officer killed in Tom’s district.

I immediately called my brother, but he did not pick up. I called my father and learned Tom was safe, but became distraught when I learned his partner Alex Valadez was killed when gang members fired on both of them as they interviewed a resident.

Words can’t describe the pain and anguish endured when an officer is killed in the line of duty. The violence in recent days has inflicted such searing pain on the loved ones of Dallas’ fallen officers, as well as the loved ones of Philando Castile and Alton Sterling who were killed by police days earlier.

With shootings in San Bernadino, Newtown, Charleston, Orlando, Chicago, and now St. Paul, Baton Rouge and Dallas, we’re seeing a barrage of mini-civil wars being fought on American streets. Civil war is defined as “a war between citizens of the same country.” The Civil War of the 1800s was a large-scale economic conflict between the North and South about Black slaves as property, but what we’ve seen recently in South Carolina, Orlando and Dallas, are acts of civil war rooted in hatred on the basis of race, class, gender and sexual orientation.

Like treaties that help end wars, we need legislation to put an end to our nation’s gun violence. We need a national standard defining excessive use of force. We need a Law Enforcement Trust and Integrity Act. We need a Stop Police Brutality Act of 2016. But before we can pass any legislation, we need to better understand how racism works, find commonalities among police and black communities, and neutralize the fear mongers exploiting our citizens’ pain.

The main narrative assumes that racism is a sickness and only rooted in people's minds. However, racism is more than within individuals. Racism is institutional. Institutional racism operates whether racist individuals exist or not. This is because many of our policies today were originally created to preserve racial differences in our society. Institutions like the criminal justice system, education, housing and the labor market are embedded with racist doctrines that we accept as equitable when they are inherently unequal.

For example, despite increases in educational attainment for black and latinos, the white/non-white wealth gap has not decreased. The wealth gap is rooted in acts of institutional racism that have evolved over time. Prior to the 1960s, whites benefitted almost exclusively from wealth building opportunities like college education and home ownership opportunities offered by the GI bill, Social Security, and the Homestead Act. Most black and brown people were excluded from these wealth generating benefits, even those with college degrees and professional jobs.

Institutional racism has continued in recent years as black and brown communities saw a disproportionate loss of wealth during the 2008 recession. Many of the faulty subprime mortgages targeted black and brown homeowners and were ruled discriminatory by the Department of Justice.

Related to the criminal justice system, violent crime has actually decreased since 1990 despite media perception that it is on this rise. Yet, the number of police killings has increased over this period, along with the number of black and brown people in prison. In fact, blacks and Latinos are more likely to be killed by police than whites even when they do not have a weapon, do not have a criminal record, and are not being physically aggressive.

The fear that police brutality instills in black and brown people mirrors the fear induced by lynchings of the past. Like tough-on-crime laws and police killings, lynching vilified and punished blacks without due process.

The Civil War ended more than 150 years ago, but the killings of black and brown bodies plastered over social media, stand-your-ground laws, and stop and frisk policies are the continuation of a historical pattern of institutionally racist efforts to control Black and Brown bodies. We need legislation to reform institutions and reverse this pattern of governing our nation through historically biased policies that have contemporary ramifications.

Passing legislation to reform our institutions will require finding commonalities in the struggle for life, dignity, justice, and equity among both police officers and communities fed up with police brutality. We must work together to address the politics of fear and economic exploitation creating the conditions where citizens can easily wage war on one another in our city streets.

Take, for example, Rashawn and I. Just as I want my brother in the police force to come home safely every night, Rashawn (a father of two black sons and relative to three former police officers) also wants his children and loved ones to come home safely. Our current policies permit police officers, and at times regular citizens, to use excessive force by simply perceiving a threat or being fearful. Working to prevent excessive violence, improving economic opportunity for the disadvantaged, and passing gun control laws would be beneficial to both law enforcement and minority communities.

As we strive toward reform in the days and months to come, we must also shut down the fear mongers. Some will argue that police killings of black men justify the Dallas shooting. Some will argue that the Dallas shooting justifies stronger measures against black communities. This election season, some will prey on people’s fears for political power. For minorities, slogans like “Make America Great Again” simply mean a time when things actually were not better and instead much worse. Some will work to protect the profit gained from every gun and bullet fired in this country. Standing for truth and justice at this moment of crisis in our nation requires doing so in the face of those working to undermine it.

We have some hard truths about our country to admit, reconcile and rectify. We can stop these mini-civil wars before they collectively transform into something way more sinister than we can imagine. Like the aftermath of the Civil War in the late 1800s, America needs another era of reconstruction. We can stop gun violence. We can improve police-community relations in minority communities. We can progress toward ending racism.