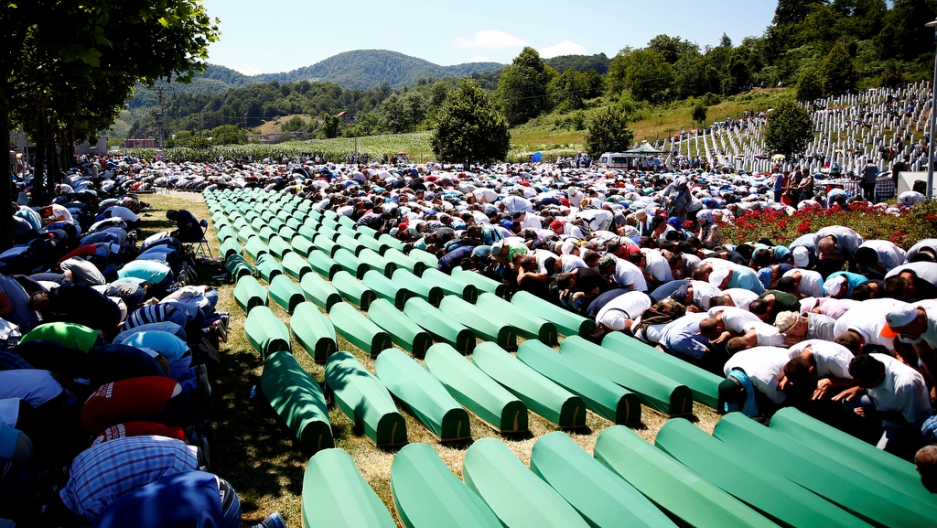 Muslim men pray in front of coffins during a mass funeral in Potocari near Srebrenica, Bosnia and Herzegovina, on July 11, 2016.
Credit: Dado Ruvic
Share

Twenty-one years after they were killed in Europe's worst massacre since World War II, the remains of 127 people were finally laid to rest Monday in Srebrenica.

The youngest, Avdija Memic, was just 14 when Bosnian Serb forces in the Bosnian town killed 8,000 Muslim men and boys in July 1995, five months before the end of the country's inter-ethnic war.

The oldest, Mustafa Hadzovic was 77.

The 127 coffins — containing remains of the most-recently identified victims, including a dozen who were under 18 when they were killed — were buried at a memorial site after a service attended by up to 10,000 people.

Before the joint funeral, widows and daughters wept as men tried to comfort them. Many mourners knelt next to the coffins, wrapped in green cloth. Some caressed the cloth coverings, others placed flowers or said prayers.

Other mourners waited near the freshly dug graves where the remains of their loved ones were laid to rest after a prayer read by Bosnia's grand mufti, Husein Kavazovic.

'The pain is immense'

"My brother is here," Ajkuna Jakubovic told AFP, pointing to a coffin.

"The pain is immense," whispered the 62-year-old woman who came with her sister Nura to bury Sabit Krdzic.

"His bones were found in the woods ... Seven years ago we were told that only two bones were found, but recently more remains were discovered and we decided to bury what was found."

In all, some 6,300 victims are buried at the Srebrenica memorial site and 230 in other cemeteries, according to Bosnia's institute of missing persons.

The remains of around 1,500 other victims have yet to be identified or in some cases, even located.

In March, a UN tribunal found former Bosnian Serb leader Radovan Karadzic guilty of genocide over his role in the killings, and sentenced him to 40 years in jail.

Bosnian Serb wartime military chief Ratko Mladic is still on trial at the International Criminal Tribunal for the Former Yugoslavia on genocide and crimes against humanity charges also related to the Srebrenica massacre.

Though international courts have recognized the Srebrenica massacre as an act of genocide, this is still denied by Serbia and Bosnian Serbs.

"Serbs will not admit genocide in Srebrenica since it did not occur," Bosnian Serb leader Milorad Dodik repeated Monday, quoted by Fena news agency.

Dodik, president of Bosnia's Serb-run Republika Srpska, added that the national day of mourning for the Srebrenica victims would not be observed in his entity.

One of the mourners in Srebrenica said this was a source of regret.

"What is sad is that 21 years on and (despite) verdicts handed down by international justice ... in Republika Srpska they still continue to deny that genocide, they continue to hurt us," Adel Sabanovic told AFP.

More than 20 members of Sabanovic's family, including his father and grandfather were killed in the massacre.

"All those 127 people we bury are like family," he said, explaining that none of those interred Monday were actual blood relatives of his.