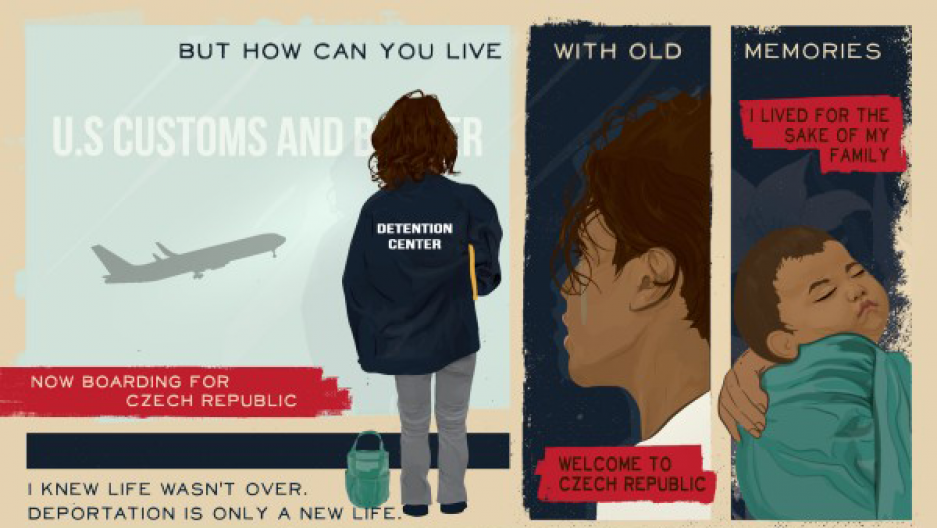 Rommy Torrico’s art forms part of CulturalStrike’s "Visions From The Inside," a project that asked 14 artists to create illustrations based on letters and interviews from migrants detained in for-profit detention facilities in the US.

A migrant woman stands dressed in a navy blue sweatshirt adorned with big white letters that reads “detention center” across her back. Her face is unseen but images of a deportation order, restless children, and a plane destined for the Czech Republic allude to the her fate.

The woman is "Ms. Horton," a migrant originally from the Czech Republic who was detained and taken away from her sons. She was deported because of a loitering charge in New Jersey.

After a decade of living in the US, Horton was forced to leave her family with only the clothes on her back and a green shower bag. Currently, she is back in the US but is being held in a New Jersey detention facility.

Undocumented, queer, trans visual artist of color Rommy Torrico created the illustration of her story based on a letter and three drawings Horton made of her children. A note from the artist accompanies the illustration:

"As I read her letter explaining her twisted, torturous nightmare, I kept thinking about the baby in the drawing, the heartache and desperation of being torn away from your children and family for a loitering charge, and the trauma of being dehumanized and broken by a system that does not want you here, and trying to survive the days by just holding on the memories of a past that already seems too far away." 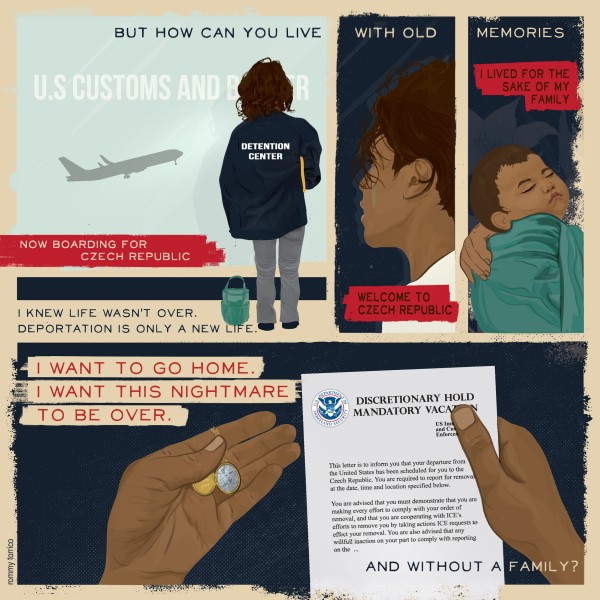 Torrico’s art is part of CulturalStrike’s Visions From The Inside, a project in which 14 artists created illustrations based on letters and interviews from migrants detained in detention facilities in the US.

More: These asylum-seekers are being forced to raise their kids in immigration 'jails'

The project includes the work of artists with a strong social justice background, including queer and trans people of color.

The idea for the project came after members of CultureStrike visited an immigration center and saw firsthand how important handwritten letters were for detainees. Letters from families and friends on the outside became conduits of support for migrants living the closed-off, restricted lives in detention centers.

Now in its second year, Visions From The Inside is a unique initiative aimed at exploring the various migrant identities and experiences both inside and outside of the for-profit detention system. The project taps the power of art to illustrate the breadth of traumas and resilience experienced by detained migrants.

Last year’s inaugural Visions From The Inside focused on letters written by mothers at Karnes Detention Center in Texas. This year the focus has expanded to include the stories of people released from detention, to illustrate the ongoing effects of trauma through the immigration enforcement process.

Julio Salgado, artist projects coordinator at CultureStrike, says the move to include experiences outside of detention is about exploring what makes someone free. "There's this idea that once you are detained and released, your problems are over," he says. "But many folks who are released have to deal with various issues, one of them being ankle bracelets. That's not freedom. It's a reminder that they're being watched and that is the price they have to pay to be out of a detention center."

In addition to Horton’s story, Visions From The Inside shares the stories of transgender women, men suffering from cancer, young mothers and loving sons, illustrated in vibrant images. The illustrations are meant to bring human stories come life and challenge the ways we reduce the human rights crisis of immigration to statistics and numbers. 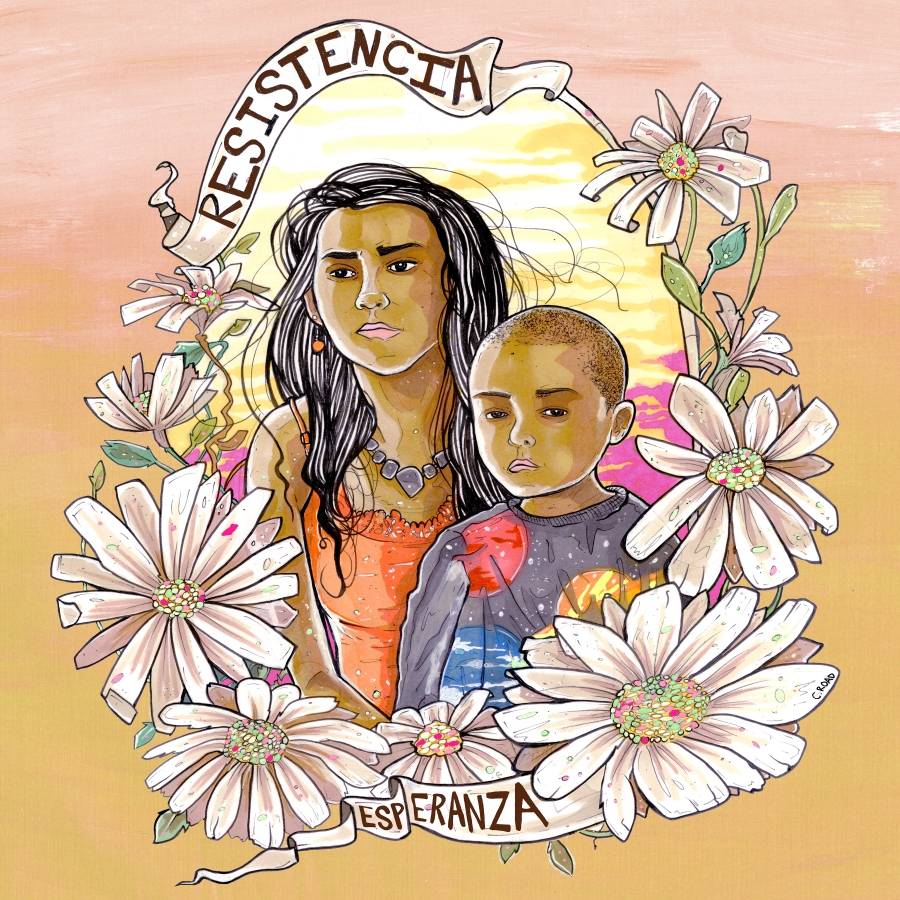 While these migrant testimonies describe horror and injustice inflicted by the immigration system, their letters, as transmitted through a vast network of activists and artists, seek to illustrate and empower detained migrants and their communities. Ultimately, the project aims to fight against the voiceless immigrant narrative and what the participating organizers see as a dehumanizing immigration system.

Also: She fled abuse in Mexico, and now this trans woman says she was abused in immigration detention too

Organizers say that the circulation of these migrant testimonies has inspired more migrants to share their stories. Iris Rodriguez from End Family Detention says that the project has had “a positive domino-effect as more families began writing their own letters once the art pieces were publicly shared. A growing number of other detainees began to get released, then openly share their testimonies in public forums."

And for artists like Torrico, and many other participants and viewers, projects like Visions From The Inside, help bring awareness of the realities inside of detention facilities while continuing to teach us about the resiliency of the migrant spirit.

“This is what’s happening. This is [Horton’s] reality and the reality of so many other women and mothers in detention. As an undocumented artist, to have had the privilege of working on this piece and sharing this mother’s story is something I truly will not forget,” says Torrico, who is participating in the initiative for a second year. "I also believe it's our responsibility as artists and cultural workers to center these issues, share these stories and amplify the message. We artists have the great honor and opportunity of shaking up the narrative through our work, and I plan on taking part in that as often as possible."

CultureStrike plans to release more illustrations in Visions From The Inside. You can follow the project on their Tumblr.

A version of this story first appeared on Global Voices, a collection of hundreds of bloggers worldwide.