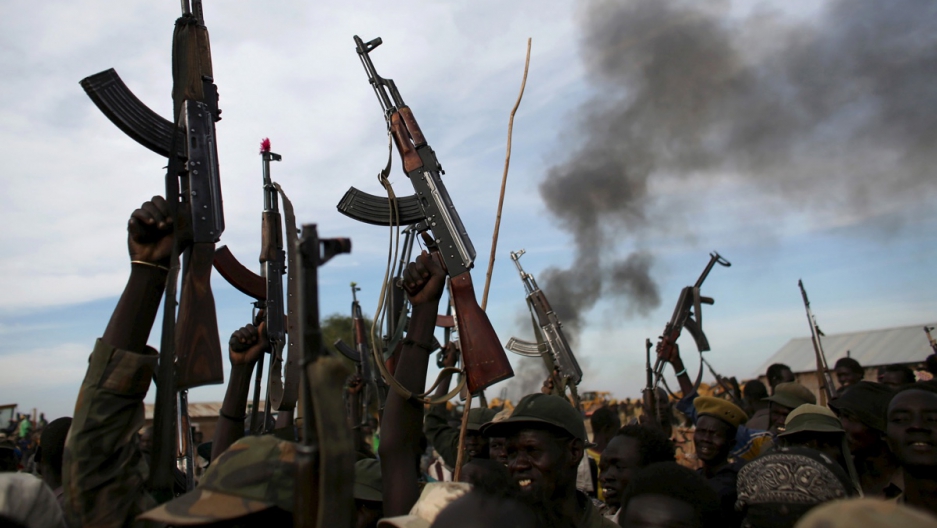 Rebel fighters hold up their rifles in a rebel-controlled territory in South Sudan in 2014.
Share

Fighting was heard in several other parts of the city throughout the day, including the tinderbox Gudele neighbourhood — where rebel leader turned vice president Riek Machar is headquartered — and the central Tongping area near the international airport, with gunfire intensifying and subsiding at different times.

Regional airline Kenya Airways suspended flights to Juba, citing the "uncertain security situation", while the US embassy in Juba warned its citizens to stay indoors.

"The situation in Juba has significantly deteriorated. There is serious ongoing fighting between government and opposition forces, including near the airport, UNMISS locations, Jebel and elsewhere throughout Juba," the embassy posted on its Facebook page.

Sunday's fighting began on the city's western outskirts where both former rebels and government soldiers have bases at the foot of the Jebel Kujur mountain.

The nearby UN House site is home to roughly 28,000 people previously uprooted by the war and living in flimsy makeshift houses. Aid workers said rounds had landed inside the UN camp, wounding some civilians.

The violence comes a day after the world's youngest country marked its fifth independence anniversary, and is a fresh blow to a peace deal that has failed to end the civil war that broke out in December 2013.

City residents hunkered down or began fleeing their homes as the UN reported the use of mortars, rocket-propelled grenades and "heavy ground assault weaponry".

Helicopter gunships and tanks were also deployed, with a spokesman for Machar saying they were being used to bombard his leader's base.

"Our forces have been attacked at Jebel base," said Machar's spokesman, James Gatdet Dak. "We hope it will not escalate."

A thick stream of fearful civilians, clutching children and meagre possessions, headed for the hoped-for refuge of another UN base close to the city's airport, only to find fighting erupting there too.

The battles were the first since Friday when brief but heavy exchanges of fire left an estimated 150 soldiers dead on both sides.

There were no immediate details of casualties from Sunday's violence.

South Sudan has seen more fighting than peace since independence in July 2011, with civil war breaking out December 2013 when President Salva Kiir accused Machar of plotting a coup.

An August 2015 peace deal was supposed to end the conflict but observers say the peace process has stalled while fighting has continued despite the establishment of a unity government.

This week's clashes are the first between the army and former rebels in the capital -- where the war broke out -- since both established positions there in April as part of the peace agreement.

In a statement the UN Security Council said the recent fighting showed a "lack of serious commitment" to peace on the part of Kiir, Machar and their supporters.

Tens of thousands have died in more than two years of civil war, close to three million have been forced from their homes and nearly five million survive on emergency food rations.

The humanitarian crisis has unfolded alongside an economic one with the currency collapsing and inflation spiralling out of control. The country's mainstay oil industry is in tatters and regional towns have been razed.